The Best Undrafted NFL Players Who Overcame the Odds 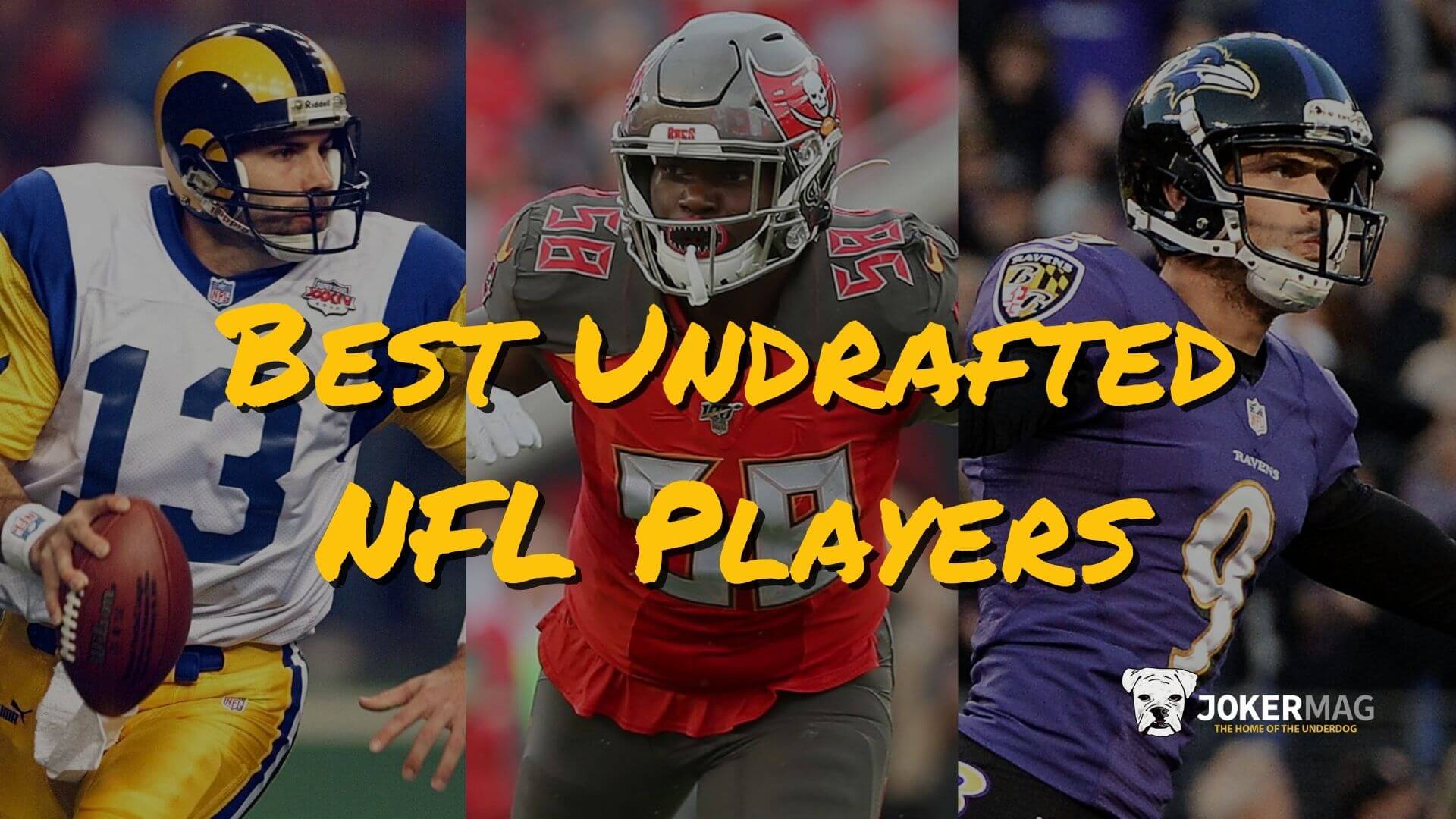 The National Football League played its first season in 1920. In over one hundred years since, more than 23,000 men have had the opportunity to suit up for an NFL game.

But the average NFL career lasts about three years. The numbers don’t lie – it’s a tough league to make a career in.

Among those thousands of NFL players, there have been over 340 to achieve Hall of Fame status. This is the pinnacle of individual accomplishment in the sport. Yet of everyone who has played a snap in an NFL game, less than 0.9% entered the league as undrafted free agents. Even fewer have stuck around.

Succeeding as an undrafted player with such slim odds is a testament to more than just talent. It signifies an attitude of hard work, determination, and above all else – embracing the underdog mentality.

Here are the best undrafted NFL players of all time – with a nod to some of the active greats who didn’t hear their name called at the draft.

Who Is The Best Undrafted Free Agent Signing in NFL History?

Kurt Warner is the best undrafted free agent signing in NFL history. If you’ve seen the movie American Underdog, you won’t be surprised. Warner went from the bottom tier of Division I football to playing in Europe and an indoor league, to being immortalized in Canton.

A backup quarterback for most of his college career at the University of Northern Iowa, Warner was named the starter as a senior and became one of the Missouri Valley Conference’s best players. He made training camp with the Green Bay Packers, but soon found himself back in the real world, working at a grocery store in small-town Iowa.

After finding success in the Arena Football League, Warner was noticed by the St. Louis Rams. Given his first shot on an NFL regular season roster, Warner soared in the shadow of the Gateway Arch. He won two league MVP awards, appeared in the Super Bowl twice, and lifted the Lombardi Trophy in January of 2000, leading his Rams to a Super Bowl victory over the Tennessee Titans.

Warner would later appear in one more Super Bowl near the end of his career, this time as quarterback for the Arizona Cardinals. He was inducted into the Pro Football Hall of Fame in 2017, unofficially cementing his status as the greatest undrafted NFL player of all time and one of the best underdog stories in NFL history.

Before Warren Moon became one of the best players in Houston Oilers’ history, he almost didn’t play high school football. Moon had to use a faulty address to enroll at Alexander Hamilton High School in Los Angeles.

He didn’t start at quarterback until his junior year at the school, and after graduation, played quarterback for two years at an LA community college. Despite his stellar play, Moon was doubtful of his ability at the NFL level in the long term. Instead, he went on to have a historic CFL career winning the Grey Cup five times.

Upon finally entering the NFL, Moon excelled as much as any player of his generation, being named to the Pro Bowl nine times and into the Pro Football Hall of Fame in 2006.

For other players, championships aren’t necessarily the best measure of success. Tony Romo played his college days for Eastern Illinois University, a member of Division I-AA. Despite setting numerous program records, Romo was not even invited to the annual NFL Combine until the last minute.

Draft day came and went without Romo being selected, but he was soon picked up by the Dallas Cowboys. Romo and the Cowboys became synonymous throughout the 2000s and 2010s, with Romo being named a second-team All-Pro in 2014 while earning four Pro Bowl selections throughout his NFL career.

After playing his final professional season in 2016, Romo has moved into a new role: as a commentator for the NFL on CBS. Replicating his success in Dallas, Romo has become one of the premier broadcasters in the sport.

Shaq Barrett started his college football career at the University of Nebraska-Omaha, but ended up transferring to Colorado State because Omaha dropped its football program entirely.

Even after finding success at CSU, Barrett went undrafted. After the Denver Broncos picked him up, Barrett bounced around from the practice squad to the active roster, before finally winning Super Bowl 50 in 2016.

But it wasn’t until he landed in Tampa Bay where Barrett truly emerged as one of the star defensive players in the league. With the Buccaneers, Barrett has been a league-leader in sacks, a two-time Pro Bowler, and a key contributor on the Bucs’ Super Bowl team in 2021.

RELATED: The Best 7th Round Picks in NFL History (Past & Present)

After his time at UT, Tucker went undrafted in 2012. Subsequently signed by the Baltimore Ravens to compete with Billy Cundiff, Tucker remains in Baltimore to this day and has become one of the best kickers in NFL history. He is a four-time member of the first-team All-Pro roster and a five-time Pro Bowler.

A unanimous member of the NFL’s 2010’s All-Decade game, Tucker also holds NFL records for the highest accuracy percentage on field goals (over 90%) and for the longest single field goal in a game (66 yards, accomplished in 2021 against the Lions).

Who is your favorite undrafted player in the NFL today? Let us know on Twitter!