The Best & Most Inspiring Sports Movies Ever Made 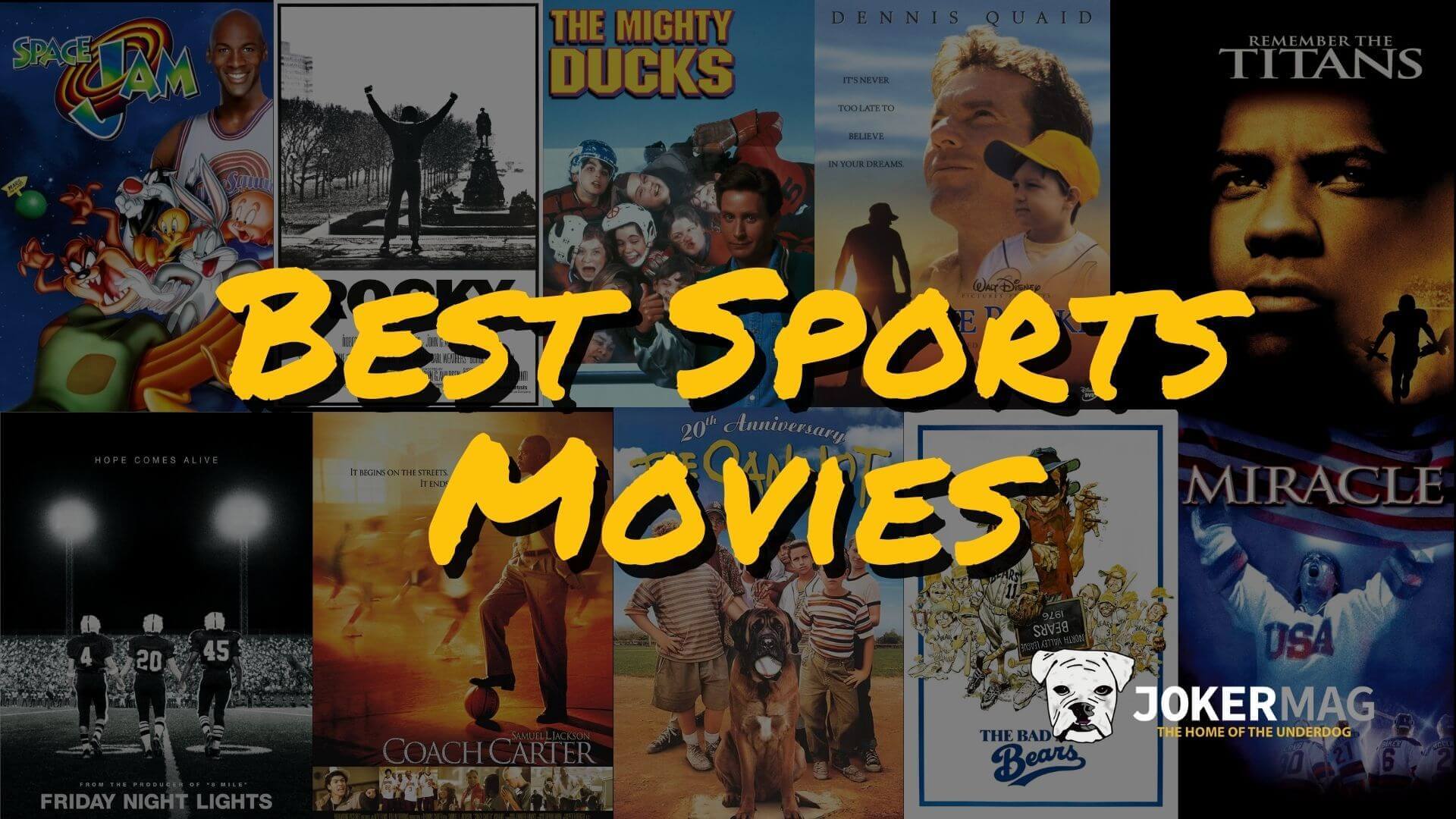 The best sports movies are ones that stick with you for days, weeks, and even years after watching them. Whether it’s the rousing speeches or monumental comebacks, every sports fan can find a specific piece that resonates with them.

But when it comes to films, everyone has their preferences.

So instead of creating our own opinionated list, we decided to poll our audience with a March Madness-style bracket to get their feedback on which flicks should be included. After measuring the results and consulting with our own panel of movie experts, we finalized our rankings to present to you.

Here is our definitive list of the best sports movies of all time.

Where to Watch: Hulu, Netflix

Adapted from Michael Lewis’ book, Moneyball depicts the story of the 2002 Oakland Athletics.  On a shoestring budget, general manager Billy Beane tries to build a competitive roster by exploiting inefficiencies in MLB scouts’ assessment of talent.

The film shares a behind-the-scenes look at what goes on in front offices and scouting departments across professional sports.

And while Brad Pitt and Jonah Hill bring legitimate superstar talent (each was nominated for an Academy Award), it’s the film’s underdog spirit that makes it special.

The Natural is a sports drama that deserves more recognition in today’s age.

Roy Hobbs is a legendary character with a supernatural talent for hitting a baseball – the hardest thing to do in all of sports.

This Oscar-nominated film deserves to be a mainstay in sports cinema for generations to come.

Caddyshack brought together some of the biggest comedy masterminds of the time: Bill Murray, Rodney Dangerfield, Chevy Chase, and director Harold Ramis.

This goofball comedy was heralded as “perhaps the funniest sports movie ever made” by ESPN.

While it may be called outlandish by today’s standards, Caddyshack holds a special place in sports cinema history.

Aided by the addition of motorcycle-riding, cigarette-smoking delinquent Kelly Leak, the Bears make an improbable championship run – capped by an ending that all young athletes and coaches can learn from.

This is a delightful flick packed with laughs for the whole family.

Where to Watch: HBO Max, Hulu

The Looney Tunes join forces with Michael Jordan to take down the Monstars alien basketball squad and save the world. This is a true underdog story that is enjoyable and fun to watch. And the soundtrack brings it to another level.

As one IMDb reviewer said, this movie is a “milestone of childhood”. It cultivated a love for basketball in the next generation and immortalized Michael Jordan as a once-in-a-generation athlete.

While remembered fondly as a heartfelt kids sports dramedy, 1992’s The Mighty Ducks deals with some serious subjects.

As Bombay turns the team into a championship contender, his young players lead him on a path to conquer his demons. This entertaining flick is a fun watch for both young and old.

Category: High school football drama based on a true story

Texas and high school football. The two go together like cookies and milk. But up until H.G. Bissinger’s book, no one knew just how intense the sport can be in the Lone Star State.

Friday Night Lights received critical acclaim for its true-to-life depictions and led to one of the most successful spin-off series in recent memory. As one YouTube commenter said, “Criminally underrated movie. This is what high school sports are all about.”

It’s safe to say that the 1988 Permian Panthers will go down in history among sports fans everywhere.

RELATED: The Best & Most Inspiring Sports Movie Quotes of All-Time

Samuel L. Jackson steals the show in his portrayal of Ken Carter of Richmond, California. After turning his high school basketball team around, Coach Carter benches his whole team for their poor academic performance.

What follows is a riveting tale of redemption. This film illustrates how a coach’s impact can transcend the boundaries of sports.

Category: Baseball drama based on a true story

Where to Watch: Disney+ and Prime Video

Disney’s The Rookie chronicles one of the best underdog stories in modern baseball history – a high school science teacher achieves his dream of playing pro baseball at the age of 35.

When it comes to sports movies, Dennis Quaid is in a league of his own. The award-winning actor plays a role in films like American Underdog, The Express, Any Given Sunday, and more.

Quaid’s portrayal of Jim “The Rookie” Morris drew rave reviews from critics and helped garner an ESPY Award for Best Sports Movie. As one of the lesser-known films on this list, The Rookie is one that warrants a yearly re-watch.

“This is your time. Now go out there and take it!”

Herb Brooks’ pregame speech will live on as one of the greatest speeches in sports movie history. But was the film’s scene an accurate depiction of the real locker room speech in 1980?

Yes, according to several players on that legendary U.S. Olympic team.

2004’s Miracle is an exhilarating depiction of one of the biggest upsets in sports history. At 1,000-to-1 odds, the U.S. team stunned a Soviet squad that had outscored their opponents 175–44 up to that point.

Kevin Costner and Tim Robbins deliver top-notch performances alongside Susan Sarandon. Three bonafide stars in a film with the tagline that doesn’t do the movie justice: “A Major League Love Story in a Minor League Town”.

Crash Davis and Nuke LaLoosh are a dynamic duo that shattered the mold of modern-day baseball films. While viewers are accustomed to heroic giants like Babe Ruth and Roy Hobbs, these minor-league teammates brought depth to the genre.

This Oscar-nominated film spins a tale of romance, redemption, and the lighter side of baseball in a way that keeps you entertained for a full 108 minutes. Whenever it airs on TV – even with commercials – it’s tough not to tune in.

Category: Baseball fantasy drama based on a novel

Where to Watch: Vudu, Prime Video

“It was the game…The sounds, the smells. Did you ever hold a ball or a glove to your face?”

Adapted from W.P. Kinsella’s novel Shoeless Joe, 1989’s Field of Dreams is a certified classic in the eyes of diehard baseball fans and film buffs alike.

Nominated for three Oscars, this timeless film has cemented itself in the history of America’s pastime. The Kinsella’s cornfield has become a tourist destination, attracting visitors from around the world every year.

Now, Major League Baseball will host an annual regular-season matchup at the Iowa movie site, allowing fans to experience the magic up close.

When asking anyone for a list of the best sports films, Remember the Titans will undoubtedly be mentioned.

The inspirational Disney film is more than your typical high school football story. It presents a deeper message in a way that uplifts and compels viewers to change their outlook. Simply put, you don’t have to be a sports fan to enjoy this one.

Remember the Titans will pump your adrenaline and bring tears to your eyes, keeping you glued to the screen the whole way. When it comes to sports movies, this should be top-5 in anyone’s book.

Where to Watch: Disney+, Hulu

This 1993 cult classic is a nostalgic coming-of-age tale with universal appeal. Viewers are transported back to their childhood days of roaming the neighborhood and playing pick-up games with their best friends.

The Sandlot is a timeless adventure that captures the feeling of those childhood summers when you didn’t have a care in the world. It’s one you’ll likely show your kids someday.

As the great Roger Ebert said: “The movie isn’t about winning and losing, it’s about growing up and facing your fears.”

Where to Watch: Hulu, HBO Max

As The Home of The Underdog, it makes sense why Rocky tops our list. Both the film’s lead character and the actor who played him defied the odds on their path to success.

After writing the script in just three days, Sylvester Stallone shopped Rocky to various Hollywood producers. But they rejected him because Stallone – an unknown actor at the time – insisted on playing the lead role.

He pressed on, eventually helping create one of the highest-grossing sports film franchises of all time.

The 1976 Academy Award-winning film isn’t just a great sports film. It’s a great film in general, which is why it holds the #1 spot on our list.

We have no doubt there will be rebuttals to our list. At the end of the day, filmmaking is an art that is up to the interpretation of the viewer.

While we used all resources at our disposal – audience polls, an in-house panel of experts, aggregate ratings, and more – there will never be a final list that every single person will agree on.

With that said, here is a list of honorable mentions that didn’t quite make our final list:

Have a sports movie you think should be mentioned here? Let us know on Twitter @JokerMagHQ!