The Biggest Upsets in Sports History: Against The Odds 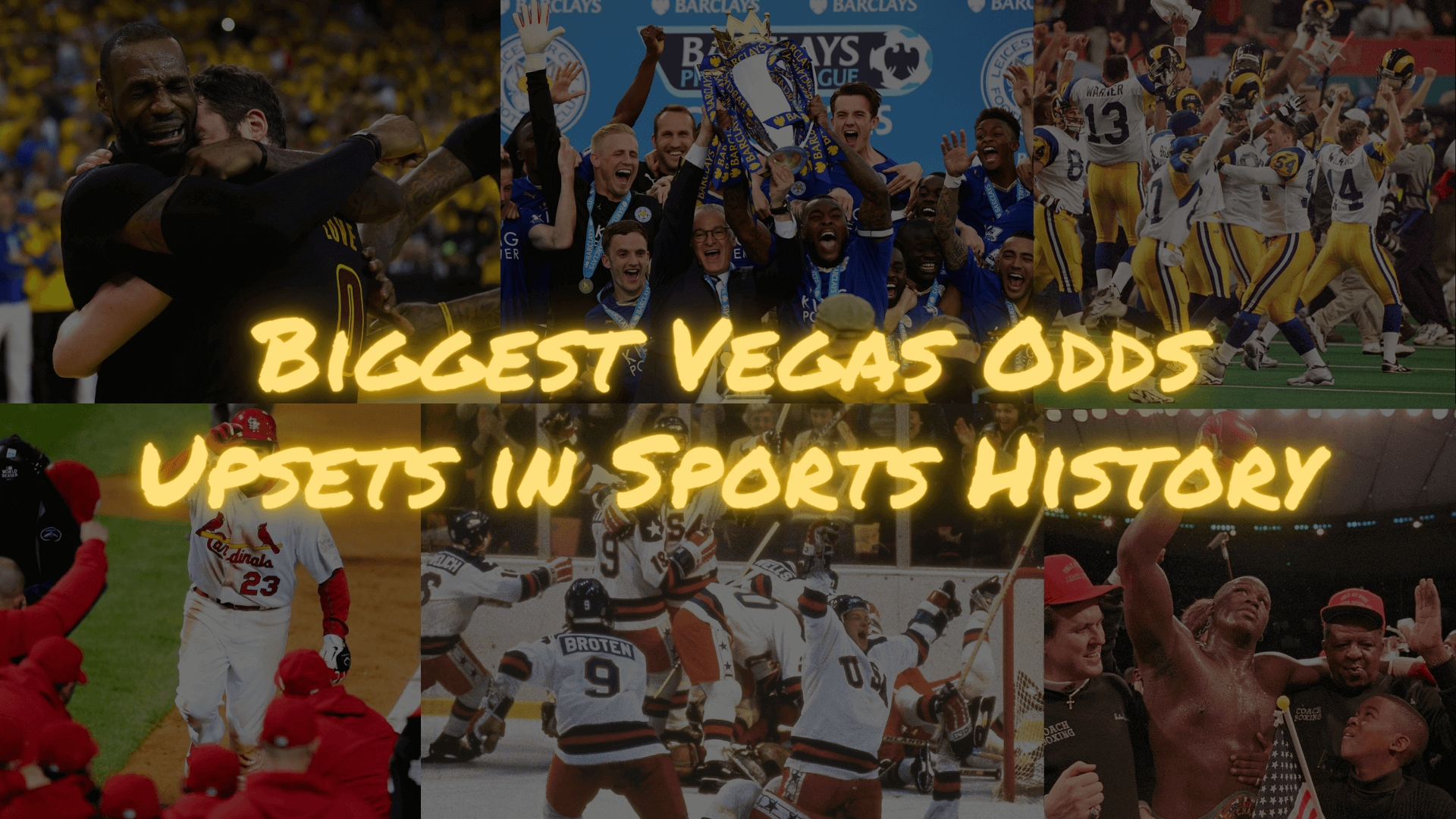 There’s nothing quite as sweet as seeing an underdog win a sports contest.  David vs. Goliath.  The We Believe Warriors vs. the Dallas Mavericks.  The Mighty Ducks vs. the Hawks.

Well, maybe one thing – winning money by betting on an underdog.  All conventional wisdom working against you.  The oddsmakers laughing in your face.  And in the end – you coming out on top.

So here’s an homage to those lucky souls that overcame the odds, whether it was because of freak luck or a herculean effort from an underdog.

These are the biggest upsets in sports history.

The English Premier League is one of those leagues where the cream tends to rise to the top.  Since 2010, only 5 teams have won the league: Manchester United, Manchester City, Chelsea, and Liverpool – and in 2015, Leicester City.

Leicester City was sitting at +500,000 to win the EPL at the beginning of the season.  This wasn’t improbable, it was nearly impossible.  And yet, they pulled it off.

The “Miracle on Ice” was an ice hockey game during the 1980 Winter Olympics in Lake Placid, New York. It was played between the hosting United States and the Soviet Union on February 22, 1980, during the medal round of the men’s hockey tournament.

In the four Olympics following their 1960 bronze-medal finish at Squaw Valley, Soviet teams had gone 27–1–1 (wins-losses-ties) and outscored their opponents 175–44.

Just a few days before the Olympics in Lake Placid, the United States team was thumped by the Soviets 10-3.  Hence the line.  I don’t even think Herb Brooks would have put money on the U.S. team.

During the game, the U.S. team was down 2-3 going into the third period, and scored two late goals to stun the Soviet team by winning 4-3.

As an aside, this made Al Michaels’ career, when he declared: “Do you believe in miracles? YES!“

RELATED: The Best Sports Movies of All-Time (Ranked by Our Readers)

In 2011, the St. Louis Cardinals were not in pole position to make a run at the World Series.  In fact, they were 4 ½ games behind the Atlanta Braves for the National League Wild Card spot, with only 15 games left in the regular season.

Accordingly, Las Vegas sportsbooks had them listed at 999 to 1 to win the World Series.

But, as they tend to do from time to time in sports, the unexpected happened.  The Cardinals put up an 11-4 record in their final 15 games, and the Braves wilted.

St. Louis made it all the way to the World Series where they toppled the Texas Rangers to become WS champions, and made the lucky bettors who laid on them a nice chunk of change.

This was the year the “Greatest Show on Turf” took the field for the St. Louis Rams.  But before they became the Greatest Show, they were the biggest joke.  The Rams teams of the late ‘90s were horrific.

The rest, as they like to say, is history.  Marshall Faulk, Kurt Warner, Isaac Bruce and Tory Holt tore up opposing defenses.  And cemented their legacy as the biggest pre-season longshot winners in Super Bowl history at 300 to 1.

The Boston Red Sox were 120 to 1 underdogs to win the World Series in 2004.  It’s surprising they weren’t further dogs considering the “Curse of the Bambino”.

But they were able to win 4 straight games to overcome their deficit, becoming the only team in the Major League Baseball to do so in the playoffs.

“The longest shot has won the Kentucky Derby!”

Rich Strike was an 80 to 1 dog in the 2022 Kentucky Derby.  His bloodline was nothing to write home about.  But the horse brought home the bacon when it counted.

The announcers were stunned as the longshot horse barreled ahead of the odds-on favorite down the home stretch. The 148th Kentucky Derby at Churchill Downs will go down in history as one of the greatest upsets in modern sports history.

Looking over this line of +4200, it’s shocking that it wasn’t more slanted.  This was during the era of Mike Tyson, a fighter that struck fear into any would-be challengers.

Coming into this fight, Tyson was 37-0 with 33 knockouts.  He didn’t just win, he won early and with ferocity.

Buster Douglas, in contrast, was an undecorated unknown.  He had nearly 7 years of age and 4 more losses on Tyson.  But, as they say, everyone has a puncher’s chance if they hop in the ring.  No man is immortal.

Unlike most of Tyson’s other fights, this one went all the way to the 10th round.  Tyson dropped Douglas in the 8th round, knocking him down with a vicious uppercut.  Douglas stumbled to his feet at the 9 count.

And he kept coming, throwing a right hook that hobbled Tyson.  Douglas then threw a series of jabs and hooks that put Tyson on his back.

The rest is history.  Tyson’s run of dominance never quite continued. Douglas, on the other hand, lost his next fight to Evander Holyfield and faded into obscurity.

The Stanford Cardinal entered this college football game as 41 point underdogs to the USC Trojans.

To give you an idea of how big of an upset this was: most sportsbooks don’t bother posting moneylines for games with such large point spreads, and this game was no exception.

This was at the height of the Pete Carroll – Jim Harbaugh rivalry that eventually spilled over into the NFL.

Stanford was able to win in the final minute 24-23 on a go-ahead touchdown pass to Mark Bradford.  The QB, Tavita Pritchard, was making his first career start.

If that isn’t inspiring, we don’t know what is.

The Retrievers defeated the Cavaliers 74–54, becoming the first No. 16 seed to defeat a No. 1 seed in the NCAA Division I Men’s Basketball Tournament.

Virginia came into the tournament with a regular-season record of 31–2.  The UMBC team completed the regular season with a 24–10 record.

UMBC’s Jairus Lyles, who scored 28 points while battling through cramps late in the second half, was named the game’s Most Valuable Player.

This stands as the only time in NBA history that a team has come back from 3-1 in the championship series. The Cavaliers won their first championship in franchise history and brought the first pro sports title to Cleveland in 52 years.

Bettor Secrets is a newsletter focused on sports betting news, tips, and tricks from sharps you can’t get anywhere else. Track the key lines and opportunities to max your EV.