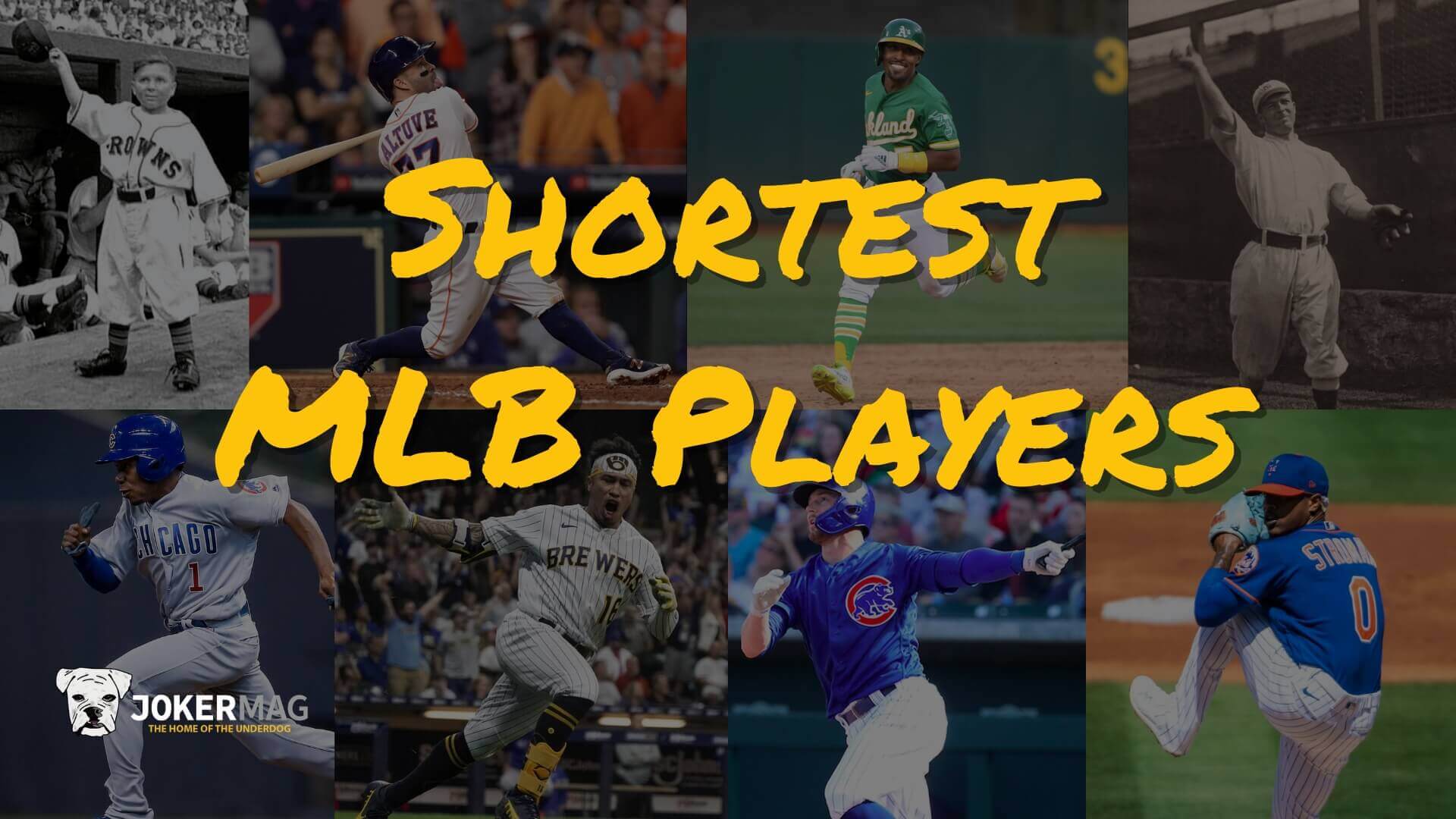 Baseball is beautiful because it doesn’t discriminate – you can either hit a fastball or you can’t. Fans have witnessed players of all shapes and sizes succeed at the sport’s highest level.

Here are the shortest MLB players ever – now and throughout baseball history.

Who Is The Shortest Active MLB Player?

Jose Altuve is 5’6″ tall, making him the shortest active MLB player.  Due to his height, scouts thought he lied about his age, and Altuve was laughed off the field in his first big league try-out.

But after signing as an undrafted free agent in 2007, he’s proven everyone wrong – amassing an MVP title and 7 All-Star Game appearances.

Who Is the Shortest Player in MLB History?

At 3’7”, Eddie Gaedel is the shortest MLB player of all time. To no one’s surprise, Gaedel drew a walk in his one and only career plate appearance.

But Gaedel’s plate appearance was just a publicity stunt.  What about real baseball players?

As far as the shortest player who played in more than one professional game, there is a lot of debate among baseball historians.

Stubby Magner was a 5’3” middle infielder who logged 11 games with the New York Highlanders (who later became the Yankees) in the dead-ball era. Then there’s Pompeyo “Yo-Yo” Davalillo, a 5’3” shortstop who batted .293 through 19 games for the 1953 Washington Senators.

Other sources list Bob Emmerich (1923 Boston Braves) and Mike McCormack (1904 Brooklyn Superbas) among others, who were all listed at 5’3” in the record books.

But those players are long gone, so there is no way to know for sure.

Altuve has succeeded against all odds, garnering a growing list of accolades through his stellar career.

Despite his diminutive stature, Tony Kemp won Freshman of the Year at Vanderbilt before getting drafted in the 5th round of the 2013 MLB Draft.

Terrance Gore turned down a football scholarship from the University of Georgia to play JUCO baseball at Gulf Coast Community College in Florida. Selected in the 20th round of the 2011 MLB Draft, Gore has carved out his niche as a pinch-runner in the big leagues.

Marcus Stroman is one of only six pitchers under 5’10” to start at the major league level in the 21st century. Selected 532nd overall in 2009, he’s built quite an impressive resume in his long career.

Wong’s father spent two years in the minor leagues and raised his son to follow in his footsteps. Kolten reportedly spent two hours a day chopping down trees with an axe to build strength for baseball season.

Ozzie Albies lost his father in 2013. To honor his legacy, Ozzie used his father’s teachings to reach the top of his game. To this day, Albies prays to his dad before every big league game.

At 5’8″, Alejandro Kirk is the shortest catcher in Major League Baseball. While he wouldn’t pass most scouts’ “eye test”, Kirk is proof that if you can play, you can play.

The Blue Jays’ backstop has defied the odds every step of the way.

Cedric Mullins traveled a long road, going from a junior college to playing in sold-out stadiums.

Torreyes started playing baseball at 4-years-old after watching his father play in an amateur league in Venezuela.

“My father was very instrumental to me,” Torreyes told The Philadelphia Inquirer.

“He said, ‘You’ve got to show them that it doesn’t matter how tall you are or how short you are. You’re ready to play. You can perform at the highest level that you go to.’”

Before starting tee ball at 3-years-old, Harrison would use a fork as a bat and a balled-up piece of paper to play ball in his kitchen.

“He’s always had that desire to just want to get better,” said Vince Harrison, Josh’s brother, and current MiLB coach.

“Being a little guy in high school – not highly recruited, guys looking over him – I think he saw the value of hard work.”

“You will hear terms like mighty mite, sparkplug, and dirt dog,” wrote 247Sports when Madrigal was first selected in the MLB Draft.

The speedy second baseman has been a steady contributor so far in his young career.

García signed as an international free agent out of the Dominican Republic in 2007. He slowly worked his way up to Major League Baseball – playing every position except first base and catcher.

A JUCO product, Giambrone received a $1,000 signing bonus when he was taken in the 25th round of the 2016 MLB Draft. He spent 6 years in the minors before finally getting his chance with the major league club – where he got his first hit on the first pitch he saw.

With that knock, Giambrone ushered in the next generation of short MLB players to defy the odds – showing the world what makes baseball so beautiful.