JUCO Players Who Made it to Major League Baseball 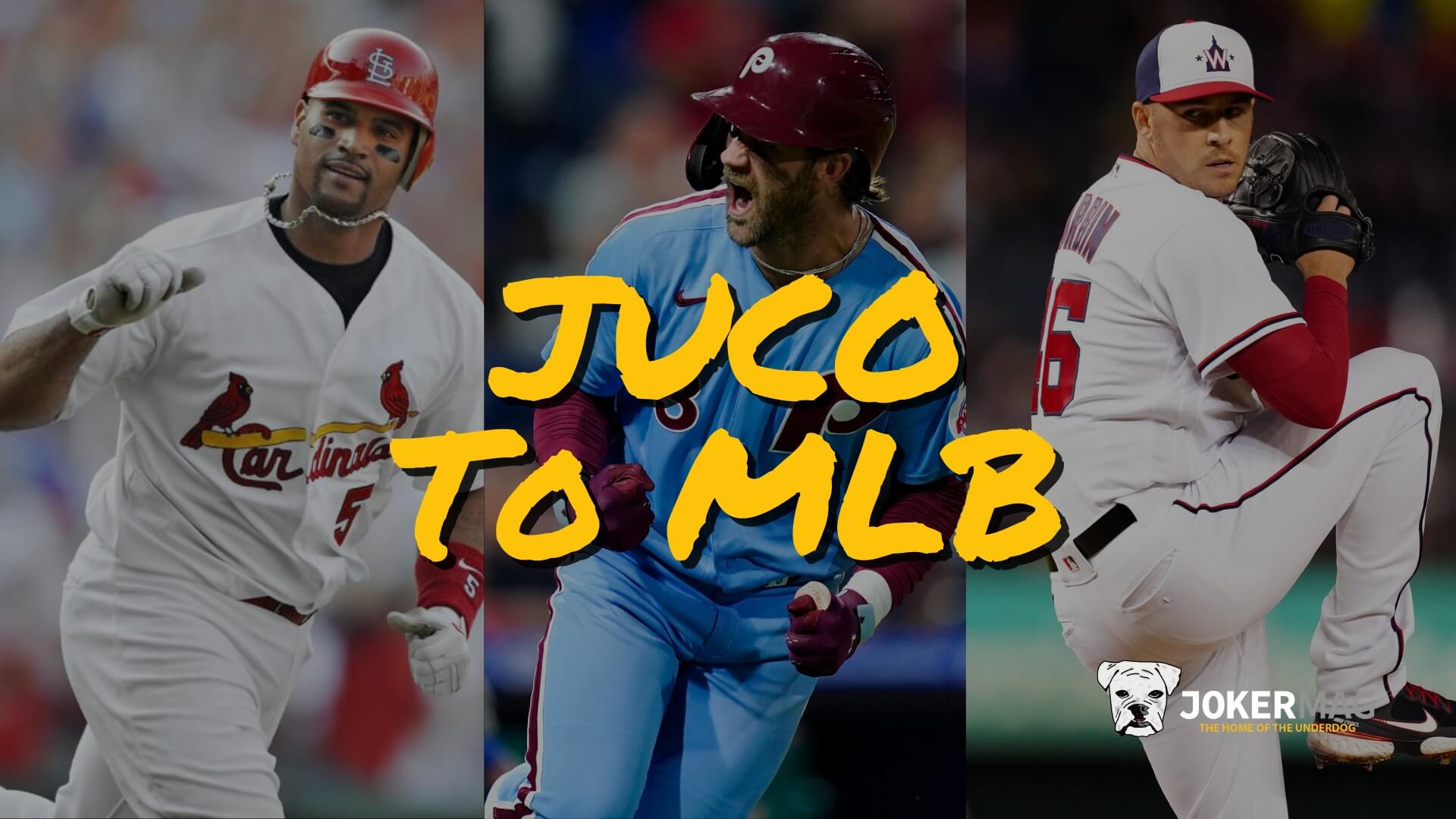 Even to the most casual of baseball fans, those schools are instantly recognizable as some of the top collegiate baseball programs in the nation.

But what about Pasadena City College?

The Southern California junior college has produced three Baseball Hall of Famers and 19 combined All-Star appearances. And yet, most have never heard of it.

Some of the best players to ever make the major leagues had humble beginnings in the sport, working their way up from the JUCO level.

Here are the best to make the leap from JUCO to MLB.

While it may not be the “common” route for a pipeline to the major leagues, baseball players will attend junior colleges for a variety of reasons, including:

For many players, the JUCO experience simply gives the average ballplayer an opportunity to compete regularly if he’s not getting significant attention from NCAA or NAIA schools.

A player who decides to start at the junior college level may be given a prominent starting role from Day One. In contrast, that same player may be riding the bench if he decided to attend a more “prestigious” NCAA program. That is because, in general, the higher the NCAA level, the better the talent, and the more difficult it is to find consistent playing time – especially for freshman ballplayers.

Then, there’s the academic side.

For student-athletes to be eligible for their respective school’s baseball squad, they’ll need to meet a certain GPA requirement, which will vary by division, conference, and school. Someone with a low GPA may use their two years at junior college as an opportunity to boost their grades and baseball performance.

By the end of their time in JUCO, motivated players will likely have improved their grades and their skill on the ball field. From there, they should receive more interest in recruiting circles among major college programs.

Bryce Harper – OF, The College of Southern Nevada

Bryce Harper attended The College of Southern Nevada with the goal of making the major leagues in clear sight. Earning his GED so that he could complete high school after just two years, Harper played one season at the college.

Unlike most colleges that use metal bats, Harper’s conference (the Scenic West Athletic Conference) was a wood-bat league for intraconference games, further giving him an edge on his road to the show. Harper got on base at over a .500 clip during his time in JUCO, hitting a team record 31 home runs in just one season.

After being drafted by the Washington Nationals with the first overall selection of the 2010 Major League Baseball Draft, Harper spent just one full season working his way up the minor leagues.

Since debuting for the Nats in 2012, he’s won two National League MVP Awards and recently signed a 13-year, $330 million contract with the Phillies. This makes him one of the highest-paid athletes in all of North American professional sports today.

Before soon-to-be-Hall-of-Famer Albert Pujols attended community college in western Missouri, he had a tough upbringing. Born in the Dominican Republic to an alcoholic father, Pujols – who had no siblings – routinely was responsible for taking care of his dad.

On the field, Pujols had scarce resources to play baseball. Limes and milk cartons replaced baseballs and gloves, and when Pujols was a teenager, his family moved to New York City.

But the difficult circumstances only got worse, as Pujols was witness to a shooting, prompting yet another upheaval, this time to Independence, Missouri.

After he earned a scholarship to play baseball at Maple Woods Community College, Pujols shined in his lone season there. He hit over .460 and soonafter was selected by the St. Louis Cardinals in the MLB draft – but not until the 13th round.

Despite being a late-round pick, it’s safe to say that Pujols has become one of the best baseball players of the 21st century. With over 650 career home runs, three MVP awards, and two World Series championships, Pujols is the ultimate definition of an underdog success story.

Craig Kimbrel may be known for his unique pitching stance and lockdown arm in the 9th inning. But before he became an eight-time MLB All-Star, Kimbrel was just a kid from Huntsville, Alabama who got his chance at the next level with a local community college.

In his freshman season at the JUCO level, Kimbrel posted a 1.99 ERA. That spring, Kimbrel was drafted, but not until the 33rd round, and decided not to sign.

Another year at Wallace State saw Kimbrel post a 2.89 ERA, another dominant season that improved his draft stock all the way into being selected in the third round by the Atlanta Braves.

In his first full season in the major leagues, Kimbrel earned NL Rookie of the Year honors thanks to an incredible 46-save season. Since then, he’s posted five seasons with at least 40 saves and has finished as high as fifth in Cy Young award voting – an extremely rare accomplishment for a relief pitcher.

Jackie Robinson‘s story is one of the most inspiring tales of courage in the face of adversity – not just in sports, but of any person of the 20th century.

While his breaking of MLB’s color barrier while with the Brooklyn Dodgers is well-known, most don’t know that Robinson began his collegiate athletic career at the JUCO level, attending Pasadena Junior College.

In addition to baseball, Robinson also excelled in basketball, football, and track. He would later go on to star in all four of these sports at UCLA. But on the diamond at Pasadena, Robinson played shortstop and won a regional MVP award.

After time served in the military and a career in baseball’s Negro Leagues, Robinson was signed to the Brooklyn Dodgers. In 1947, he made baseball history, becoming the first African-American to play in MLB.

Whilst in the major leagues, Robinson was often subject to racism and threats from other players, managers, and fans. Simply playing in the major leagues while dealing with such horrible conditions on a daily basis would have been an overwhelming success on its own.

But Robinson fought through this horror to not only demonstrate himself as a model citizen but as an exceptional baseball player as well. His accolades with the Dodgers include winning 1947 Rookie of the Year, 1949 NL MVP, and being part of the 1955 Dodgers World Series championship team.

If not for Mike Piazza‘s family connection, he may have never even been drafted by an MLB organization.

Growing up in eastern Pennsylvania, Piazza was around baseball often. His father was close friends with Tommy Lasorda and Piazza even received hitting tips from Ted Williams.

He was good enough to join the baseball team at Division I Miami – or so he thought.

A significant lack of playing time there showed him that transferring down to the JUCO level was the better choice, where he attended nearby Miami-Dade Community College.

After his time at Miami-Dade, Piazza was barely on the radar of major league scouts. He was so overlooked, in fact, that he was not selected until the 62nd round in the 1988 draft. Even then, his name was only called when Piazza’s father asked his friend Tommy Lasorda to draft his son as a favor to the family.

There were over 1,300 players selected before Piazza that year.

Switching to the catcher position did wonders for Piazza, who improved both as a hitter and behind the plate. In September 1992, he made his debut for the Los Angeles Dodgers. But his “true” rookie year was in 1993 when he not only became an All-Star but was honored with NL Rookie of the Year hardware as well.

Fans likely best remember Piazza for his time with the New York Mets. The franchise retired his number 31 and inducted Piazza into their team hall of fame as well. Of all his memorable moments in Queens, his name will forever be associated with hitting the game-winning home run on September 21st, 2001, in the first baseball game in New York following the 9/11 attacks.

Piazza’s “healing home run” united a city and brought joy to a country that was in so much pain.

For more stories like this one, join our free Underdog Newsletter in the box below!