D3 Players Who Made it to Major League Baseball 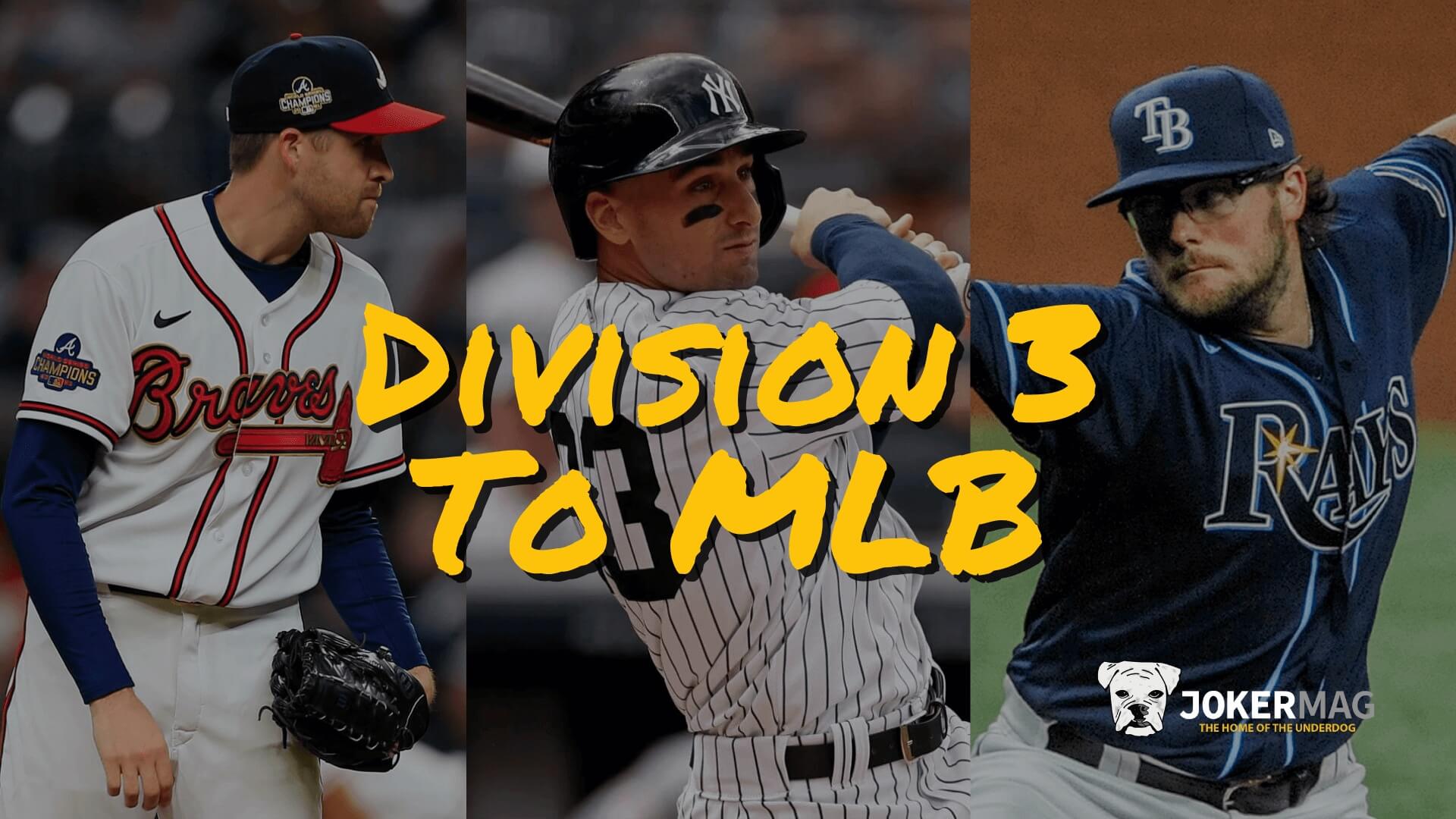 Many kids dream of becoming a professional baseball player. Donning the uniform of their favorite team. Running out under the lights to thousands of screaming fans. Hitting a walk-off homer in Game 7 of the World Series.

But, you need to beat long odds to get there.

According to Casino.org, only 5.8% of high school seniors ever play for an NCAA baseball program. And just 0.5% of those senior boys get drafted by an MLB team. Even then, per Baseball America, only 17.6% of players drafted make it all the way to the big leagues.

And yet, talent can emerge from unexpected places. It isn’t always confined to the powerhouse programs you see on ESPN. Future big leaguers can be found at every level of college baseball.

Here is a breakdown of Division 3 players who made it to Major League Baseball – now and throughout history.

In three seasons, he posted a 4.29 ERA across 171.1 innings. The Mets drafted him in the 18th round of the 2008 season, and after working his way up the rungs of the minors, McHugh became the first player from Berry to play in an MLB game.

He grew up idolizing Atlanta Braves legends like Greg Maddux and Tom Glavine. Now, with a World Series ring on his finger, he’s wearing the uniform of his hometown team. For real this time.

Locastro’s high school coach, an alumnus of Ithaca’s baseball program, paved the way for Tim to play for his alma mater. There, the speedster weighed in at a mere 164 pounds as a college freshman. But he put in serious work for scouts to take notice.

“It was a grind all the way up, but you just gotta keep fightin’,” Locastro said on MLB Network’s Hot Stove.

Selected in the 13th round in 2013, the lightning-fast outfielder set an impressive record as an MLB rookie – stealing 29 straight bases to start his career.

Needless to say, the left-hander didn’t receive much recruiting attention. The only program that believed in him was D3 Webster University in Missouri.

Fleming made a big jump as a freshman for the Gorloks, hitting 90mph on the radar gun for the first time in his life. As he improved, scouts started showing up to every game he pitched.

Ultimately, the Rays took him in the 5th round of the 2017 draft, and the lefty made his MLB debut just four years later.

RELATED: The Biggest Misconceptions About D3 Baseball (According to College Coaches)

Herget is a 5’10” right-hander out of Kean University – a decorated D3 program in Union, New Jersey.

He spent 9 years grinding through the ranks of the minor leagues, making it all the way to Triple-A in 2016, but never taking the final step.

Then, in August of 2022, the former 39th-round pick finally got the call to make his major league debut at the age of 31.

After going undrafted out of a small-town high school in Pennsylvania, the right-hander attended Division III Albright College in his hometown state. Despite setting the school’s strikeout record in his 4-year career there, he went undrafted again in 2010.

“You know technically, I’m not even really supposed to be here right now,” he told the Toronto Sun in 2011. “So…might as well make the most of it.”

The Cubs took him in the 8th round in 2016, where Ridings spent several years before being shipped to Kansas City.

After posting a 5.91 ERA in rookie ball, the Royals released him. While some thought his playing days were over, Ridings refused to quit – reviving his career and getting a chance in the big leagues with the New York Yankees.

Former Major Leaguers Who Played at the Division 3 Level

He was 5-years-old when his parents divorced, and spent his childhood living with various family members. According to Sports Illustrated, his family relied on food stamps to keep everyone fed.

A natural-born righty, Wagner taught himself to throw left-handed after breaking his arm twice as a kid.

He was only 5’5″ and 135 pounds as a senior in high school, causing many college programs to look past him.

After following his cousin to Division 3 Ferrum College in Virginia, Wagner set NCAA records before beginning a long major league career. A 7-time All-Star, Billy Wagner will go down as one of the best closers in baseball history.

RELATED: D3 Football Players in the NFL – Now & Through History

Despite being a three-sport athlete in high school, Joe Nathan received minimal interest from Division III schools. He landed at Stony Brook – a D3 program at the time – partly because of a connection his high school coach had there.

After moving from shortstop to the mound, Nathan’s future as a pitcher was solidified. The San Francisco Giants drafted him 159th overall, and he went on to become a 6-time All-Star closer with the Minnesota Twins.

“Stony Brook was the perfect fit because it allowed me to play and grow,” Nathan told the Times Herald-Record. “I’m just glad I got stronger and (San Francisco) was patient through all of my trials and tribulations.”

Erik Kratz caught every at-bat of every game he played for Eastern Mennonite, a small liberal arts college in Harrisonburg, Virginia. He won the conference’s Player of the Year honors twice and broke the NCAA Division III record for doubles in a career.

The Blue Jays selected him 866th overall, and Kratz fought an uphill battle, spending six years rising through the ranks of the minors. After finally making the major league roster at age 30, he stuck around, playing for nine different teams across 11 MLB seasons.

In four years of varsity baseball, Zimmermann moved around the diamond – splitting time as a catcher, starting pitcher, and closer. He continued his career at UW-Stevens Point – where, as a quiet sophomore pitcher, he led his team to the D3 College World Series.

Zimmermann did it again the following season, which impressed the Washington Nationals enough to grab him in the second round – making him one of the highest Division III selections of the past 20 years.

Now, the right-hander has accomplished more than anyone expected: two All-Star selections, a no-hitter, a National League wins title, and – best of all – his college baseball field named after him.