The Next Blockbuster Sports Film

Have you ever wondered what it’d be like to have a real life fantasy team? It’s every sports nerd’s wet dream.  That’s the basis of The Only Rule Is It Has to Work.

Their goal: bring the league into the 21st century.  In their season with the Stompers, outsiders Sam and Ben challenge the conventional ideas believed by baseball fundamentalists.  From five-man infields to signing a former home run king, they experiment with everything. 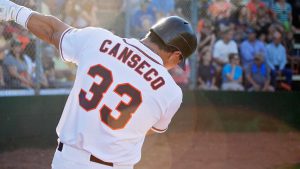 Ben and Sam do whatever they can to give their team an edge.  They create spreadsheets composed of overlooked MLB prospects.  The ones who were too small, too heavy, too old, or didn’t throw hard enough to warrant a draft selection.

They install the most cutting-edge tracking systems they can get their hands on.  And, most importantly, they stress over the human element.  The realization that these are real people, not just names on a spreadsheet.

Their players don’t understand their ideas and their manager refuses to embrace them.  They quickly realize that they bit off more than they can chew.  In the end, we learn an important lesson: change is hard to come by.

The book also has serious Hollywood blockbuster potential.  Think a cross between Moneyball, Draft Day, and Trouble With the Curve.  All in all, it has the makings of the next great sports film: an irresistible premise, colorful characters, captivating scenes, and the constant wondering of what will happen next.

One particular scene convinced me that this book needs the Hollywood treatment.  It happens towards the beginning, when the Sonoma Stompers scrimmage San Quentin.  No, not a professional team based in California.  I’m talking about San Quentin State Prison.

The scene plays out like something straight out of The Longest Yard, except it’s real.  San Quentin has two teams, each practice for three hours every weekday.  They take it very seriously, especially against professional teams.

So, a team of twenty-somethings get patted down before stepping foot on a field with pancake flour baselines, geese wandering the grassless outfield, and murderous convicts in the opposing dugout.

There are towers within a thousand feet of the field, housing armed guards.  The Stompers are warned that, if faced with a hostage situation, guards will shoot through them to stop the prisoners.

Additionally, alarms go off every half hour.  When this happens, all prisoners must stop mid-play and sit on the ground.  Amid these conditions, there is a game to be played.

If you have the time, The Only Rule Is It Has to Work is well worth the read.  And, if we’re lucky, it’ll be made into an entertaining feature film.