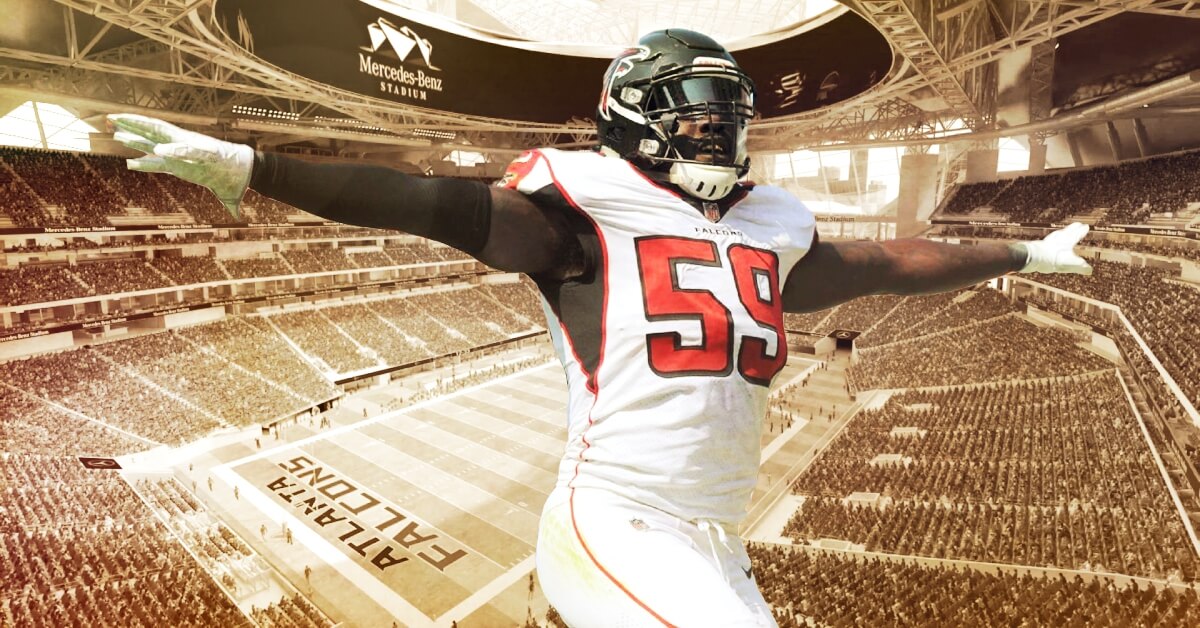 There’s a reason why De’Vondre Campbell’s Twitter handle is @Came_Along_Way.  The Falcons’ strongside linebacker faced a glut of obstacles on his journey from Fort Myers, Florida to Mercedes-Benz Stadium.

Growing up, he was always fast.  But his mother didn’t let him play on an organized team as a kid.  Instead, she wanted him to focus on his education.

During his freshman year of high school, Campbell hit a growth spurt.  Sprouting up from 5’9″ to 6’1″, he decided to try out for the basketball team.

“After a practice,” Major told the Naples Daily News, “I came into the gym and a coach was out of line so he didn’t want to play anymore. I told him, ‘You’re way better at football, try that. You’re fast for your size.’”

So Campbell went out for the football team.  His coach liked his athleticism, but knew he was very raw and had a lot of work to do.

Campbell gradually improved his game over the course of his high school career.  But his team was bad.  Between three different head coaches, the team lost games by 30 and 40 points.

But Campbell never took a play off.  Every Friday night, he’d chase after the quarterback until the clock hit zero.

“I can’t find it in my heart to give up,” he told Bleacher Report. “I don’t care what the score is or what the situation is.”

His junior year, Campbell ran the 200-meter dash for the track team.  One of his opponents was local legend and current Chiefs receiver Sammy Watkins.

The two ran neck-and-neck the whole way.  In fact, many in attendance thought Campbell won.

Regardless, the accomplishment gave Campbell more confidence.  He began to really believe in himself, realizing his potential on the gridiron.

“I played against a lot of good players in high school, some I felt I was actually better than,” Campbell told the Star Tribune in 2013. “But I kind of felt it was just the school that I went to. We didn’t get a lot of recognition… It made me hungry because I knew how good I really was.”

Despite a 13-sack senior season, Campbell slipped through the cracks, an extremely difficult feat in the recruiting hotbed of south Florida.  A post-season All-Star game seemed like his final chance to play football.

He was ferocious that night, dominating from sideline to sideline.  He even had a pick-six that got called back by a penalty.  After the game, a coach from Hutchinson Community College, a JUCO in Kansas, handed him a business card.

Campbell jumped on the opportunity.  But that August, in his first college training camp, he nearly threw his career off the rails.  Blazing toward the quarterback, he slammed into a 300 lb lineman and blacked out.

It wasn’t your run-of-the-mill concussion, either.  Confined to a dark bedroom for over three weeks, Campbell’s head throbbed, vision blurred, and he could barely hold a simple conversation.

“It felt like my head was just…my brain was just…I don’t know. It was f***ed up,” Campbell said, “If we were having a conversation, I’d be like, ‘What were we just talking about?'”

Forced to redshirt, Campbell struggled with the idea of spending an entire year at school, away from his family and friends.  It didn’t help that Hutchison was in the middle of nowhere.  The way he described it, it was a town with “one Wal-Mart and one gas station.”

But there was no other option.  Back home, many of his old friends were falling into the drug game.  Some were already in jail.

So he stayed, waiting it out til the next season.  Once he got back on the field, he racked up 83 tackles and 3.5 sacks, commanding D1 attention.

But still, it was difficult to find a landing spot.  After all, he wasn’t the blue-chip, surefire prospect most top programs look for.

“Out of community college, I was like a two, three-star recruit,” Campbell told The Atlanta Journal-Constitution.

At first, an SEC team did show interest.  But a coaching change quickly took that opportunity off the table.  That’s when Minnesota called.

First, assistant coach Bill Miller visited Campbell and his mother.  He left so impressed that he demanded head coach Jerry Kill meet him in person.

Coach Kill and his wife touched down in a jet for their visit.

“He’s a kid you could tell was hungry,” Kill said.  “I got a chance to meet his family. And meeting his family tells you a lot. You can tell he was a good kid.”

With three years of eligibility, Campbell moved out to Minnesota to continue his college career.  During his final year, however, he received troubling news on the home front.

His mother, Cathryn, just suffered her second heart attack.  If the family didn’t live around the corner from the hospital, she might not have made it.

She was also fighting breast cancer.

But just like her son, she fought for years, refusing to give up.  These days, she’s happy to call herself a cancer survivor.

To finish his career at Minnesota, Campbell racked up 208 tackles, 6.5 sacks, and two interceptions.  Making his mother proud, he also got his degree in business and marketing.

Then, in the 2016 NFL Draft, Dan Quinn and the Atlanta Falcons made him their 4th round pick (115th overall).  Just like in high school and college, he’s improved with every season.

Now, in his third year in the league, he’s a quiet leader in the locker room.  His rigorous journey is an inspiration to many of his teammates.

“For him to keep grinding and to keep doing what he was doing and still make it to the level that he wanted to play on is great,” said linebacker Deion Jones.

Campbell doesn’t forget where he came from, either.  Every summer, he hosts a youth football camp at his old high school.  He doesn’t want the next generation to have to endure the same struggles he did.

“A lot of the kids think they don’t have a choice,” he said. “They don’t think they have anything to do. That was just my opportunity to give back. Give them a day where they can have fun, come out compete and enjoy themselves.”

Campbell’s come a long way.  And his story of overcoming adversity is an inspiration to anyone seeking to do the same.