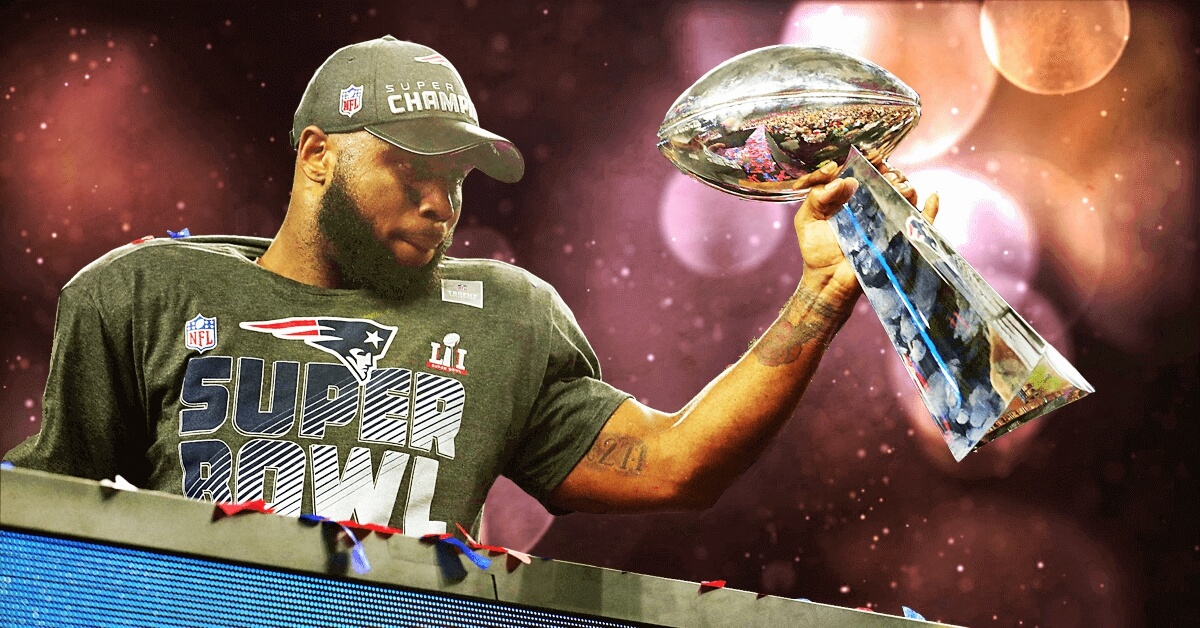 The Patriots had just completed one of the greatest comebacks in the history of sports, erasing a 25-point deficit against the Atlanta Falcons to clinch their fifth Lombardi trophy in sixteen years.

Tom Brady picked apart the Falcons’ defense in the second half and overtime, earning himself yet another Super Bowl MVP. Brady, however, knew he was not the one who should have received the trophy.

The man deserving it flew under-the-radar his entire career. In fact, he was barely known outside of New England.

What happened on top of the podium following the Super Bowl sums up James White’s career in a nutshell.

Terry Bradshaw, a decorated QB in his own right, talked to Brady first. Then, he called James White up, but instead, Bradshaw called him James Lewis. How can someone forget the full name of a player who had fourteen receptions for 139 total yards (110 receiving), scored three TDs and a 2-point conversion?

Well, it is fitting.

White has been overlooked his entire career by those who do not understand the depths of his success. Despite being written off at each level as too small, or that he cannot be an every-down running back, James White has succeeded at every level. And he’s OK with that. Because #28, known affectionately as “Sweet Feet,” does not care.

He will just keep moving along and proving the doubters wrong and that James White is a name to remember.

You can ask any NFL player, coach, or television commentator about James White, and they would all sum him up in one word:

When the Patriots flourish on offense, chances are White is having a good day. The Patriots saw something in this man in 2014 when they drafted him in the fourth round.

White’s winning ways go back to high school as a back for the powerhouse St. Thomas Aquinas High School, where, alongside future NFL running back Giovani Bernard, White won a national championship. But despite his strong performance in high school, recruiting outlets ranked White as just the 70th ranked running back in his draft class.

This was just the beginning of White’s long path to proving the naysayers wrong.

He chose Wisconsin for his collegiate career, where he quickly won Big 10 Freshman of the Year. White rushed for 1,052 yards and 14 touchdowns, helping lead the Badgers to the 2011 Rose Bowl. He kept plugging along, quietly dominating, yet wasn’t even a blip on the radar of public notoriety.

Regardless, he forged on, exploding for a career-high 205 yards rushing in one game in 2013, showing why he deserved a shot at the NFL.

Carving Out a Pro Career

Still, many looked right past him. After all, he was a smaller back splitting time with other future NFL running backs: John Clay, Montee Ball, and Melvin Gordon.

But White seized every opportunity, whether in the backfield or split out wide (a trait that coach Bill Belichick took note of entering the 2014 NFL Draft).

On draft night, White watched his fellow backs fly off the board.  When the Patriots snatched him up, he was the thirteenth running back to go.

How could that happen to a player who’s dominated since his high school days?

Well here are a few of the knocks against White entering the draft: Lacks ideal long-speed, recyclable, not quite a burner, lacks bulk strength, developmental back, will be steamrolled at times, not great in one area, isn’t cut out to be a starter.

This is merely a shortlist of the many disparagements by NFL draft analysts.

What’s separated the Patriots from many other teams this century is that they often find overlooked and underrated players who can play a specific role in making the team better.

While White may have lacked the conventional skills of an every-down running back for many teams, the Patriots saw White as a commodity to be used properly in the Patriot Way.

New England saw a productive late bloomer who had 125+ carries every year at Wisconsin, despite splitting time.  And someone who only fumbled twice in 669 career carries.

Where many saw White lacking in strength, speed, and quickness, the Patriots saw him as a durable, consistent runner and receiver who never takes a play off. It’s an understatement to say that White has exceeded expectations for the Patriots and proven his doubters wrong.

Simply put, the Patriots could not have won without James White.

Whenever they needed a big play, White seized the opportunity. He has ice in his veins like so many great athletes because White, like others, lives for the moment.

Many view him as an underdog, but he’s been a champion since day one for how he goes about his business and competes. He may have an underdog mentality, but he’s no longer ignored.

White eclipsed his own record for receptions with 87 this season, serving as a catalyst for the offense, and playing a huge role in the Patriots clinching its tenth straight division title and yet another first-round bye in the playoffs. When White received thirty-five or more snaps a game this season, the Patriots only lost once.

James White says it best: “It doesn’t matter if I have 61 receptions or 10 receptions…I just want to go out there and play hard, help my team get wins. I’m just trying to help my team win.”

You got that, Terry Bradshaw?