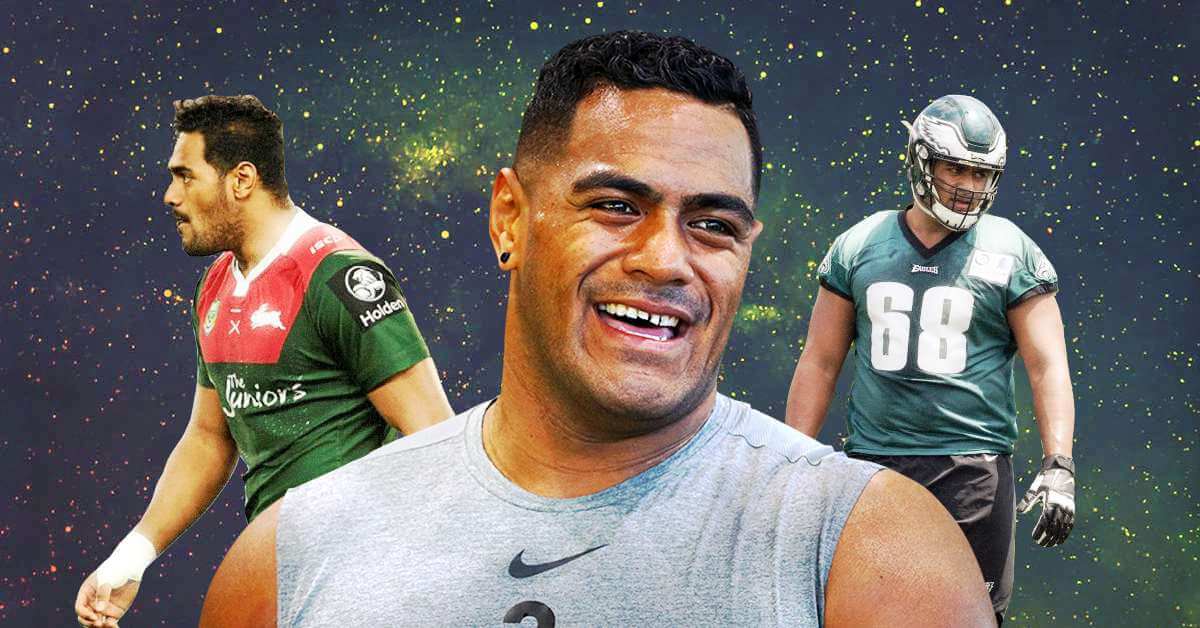 Many NFL fans were naturally intrigued when they heard the Eagles drafted an Australian rugby player as a 7th round pick and future offensive line investment.

Since then, 21-year-old Jordan Mailata has received a lot of press coverage. His story, progress, and outlook as an NFL player are all things that anybody who appreciates a success story wants to learn more about.

Being underestimated and overcoming adversity to join the NFL ranks is a story that resonates with fans. Especially with the world champion Philadelphia Eagles, whose ingrained “we all we got, we all we need” mentality brought them national admiration.

How Does He Look?

So how is Mailata adjusting to the game of football? How is his admirable story of grit and determination developing?

In short, he looks good. Ahead of expectations according to many, and his story keeps getting better and better.

As fans learned more about Mailata, they saw true Philly spirit in this 6’8″ 345 lb prospect, completely new to the sport, leaving his life in Australia to relocate and play football as a truly once-in-a-lifetime opportunity.

According to many sources, Jordan became “too big” for his hometown’s rugby league back in Sydney, Australia. Thus, his coach at the time put together the infamous highlight reel of him plowing over pitch players like a wrecking ball and sent it off to the NFL in hopes that the league would recognize his immense raw talent.

NFL scouts recognized, and Jordan was invited for tryouts in Los Angeles and later NFL minicamp and finally, the Combine.

When the time came, he threw up some impressive Combine stats. Numbers that put him in the elite ranks of O-line prospects. According to NFL.com, his Pro Day numbers reflected:

Both of these are comparable, with the edge to Jordan. But remember, he only had a short NFL minicamp to get acclimated to these athletic measures, after deciding early last year to try his hand at the NFL. Even with these Pro Day numbers, NFL Combine rankings had Jordan at a “50-50 chance to make an NFL roster.”

Despite this, or maybe in some ways because of it, Eagles executives Howie Roseman and Joe Douglas made a case for Jordan and the Eagles drafted him in the 7th round, seeing through the ranking and betting on his athletic ability.

Many analysts saw this as a gamble at best. Several NFL pundits thought he was a “practice team” player.

Admittedly, Jordan started out rough, simply trying to learn the game while overcoming a knee injury sustained in rugby that became aggravated in camp. At one point, he was run over by defensive end Steven Means, which Mailata called his “Welcome to America” moment.

Taking this in stride and always learning, his work ethic and personality started to get noticed. Veteran Eagles tackle Lane Johnson described him as a “crazy athlete” and amplified the importance and potential of Jordan’s natural abilities by saying, “Can’t teach that size, can’t teach that arm length.”

Veteran guard Brandon Brooks commented, “You can’t really get under his skin,” noting that Jordan seemed impervious to the typical training camp harassment package of the coaching staff. Jordan simply laughed it off saying, “I get treated the same as everyone else: a lot of yelling.”

All in all, Jordan’s attitude and hard work started paying off. His early performance in the preseason against the Steelers earned him the praise of Eagles offensive line coach Jeff Stoutland, who said “he really settled in and tried to apply the techniques we’re teaching him. I think he did a nice job with that part of it.”

Jordan continued to settle in and solidified himself as an NFL-caliber player in the eyes of many against the Browns in Week 3 of the preseason. He handled veteran defensive end Nate Orchard well, and began to show natural and easy movement when adjusting to defensive stunts and switches in the pass blocking scheme.

Shot 8 – So impressed by rookie LT Jordan Mailata. A true dancing bear with his size and athleticism, playing in the third football game of his life, and he looks like a natural. Strong punch in pass pro, he’s picking up stunts, got movement in the run game as well #FlyEaglesFly pic.twitter.com/1fqn2v89ZH

After the final preseason game against the Jets, Jordan was a known commodity. As a result, many changed their tune on the once “gamble” prospect.

I no longer think 21 year old Aussie LT Jordan Mailata is going to be a starting LT in the NFL.

I think he’s going to be All-Pro.

Borderline obsessed with this dude at this point. This is crazy.

Eagles are going to go right from Peters to Peters Jr.

A Look to The Future 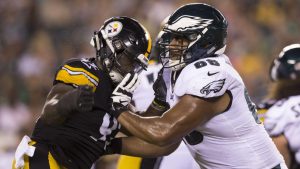 When reviewing the Browns and Jets footage, one thing that stands out immediately is Mailata’s footwork. This guy is big and fast on his feet. He shows the nimbleness of some of the O-line greats like Walter Jones or Anthony Munoz.

In fact, he reminds me a lot of Anthony Muñoz, and some of Coach Stoutland’s comments about the “unique characteristics” of Mailata make me think about him catching a pass or two in the future in true Munoz style. Even Coach Pederson has reportedly joked about getting Jordan the ball in a goal line situation. How f-ing awesome would that be?!

Imagine his big ass running somebody over. Or even catching a pass in the flat for the end zone — another Philly Special in the arsenal.

The story thus far is punctuated with Jordan Mailata, despite only wearing pads for the first time a few months ago, making the 53-man roster. Having made the team, he stated being officially part of the roster was “like a little kid going to Disneyland. I’m very lucky and blessed to have the teammates that I do.”

Though he has not seen play yet in the regular season, he continues to get looks and improve every day under the tutelage of All-Pros Lane Johnson and Jason Peters.

In true Jordan fashion, number 68 concedes to not being as ready as he’d like but says, “if I keep grinding 100%…I’ll get in.”

Many people underestimate the importance of the offensive tackle position to the future of NFL franchises. O-linemen have to be strong, fit, fast, smart, and above all, big. All indications point to Mailata as having all of these and more and that he will continue to support the Eagles, likely in a starting position soon enough.

His progress according to some accounts is faster than expected. His inspiring story of overcoming tremendous odds and adversity make the Eagles his ideal team, whose underdog spirit in 2017 continues to inspire us.

We will be tracking this story to see history in the making, and look forward to great things from this player, and his contributions to the Eagles and the league.

So when will we see Jordan Mailata in a regular season game? On the offensive line, or perhaps in the backfield on the goal line? Comment below.