The Rise, Fall, and Resurrection of Jalen Hurts 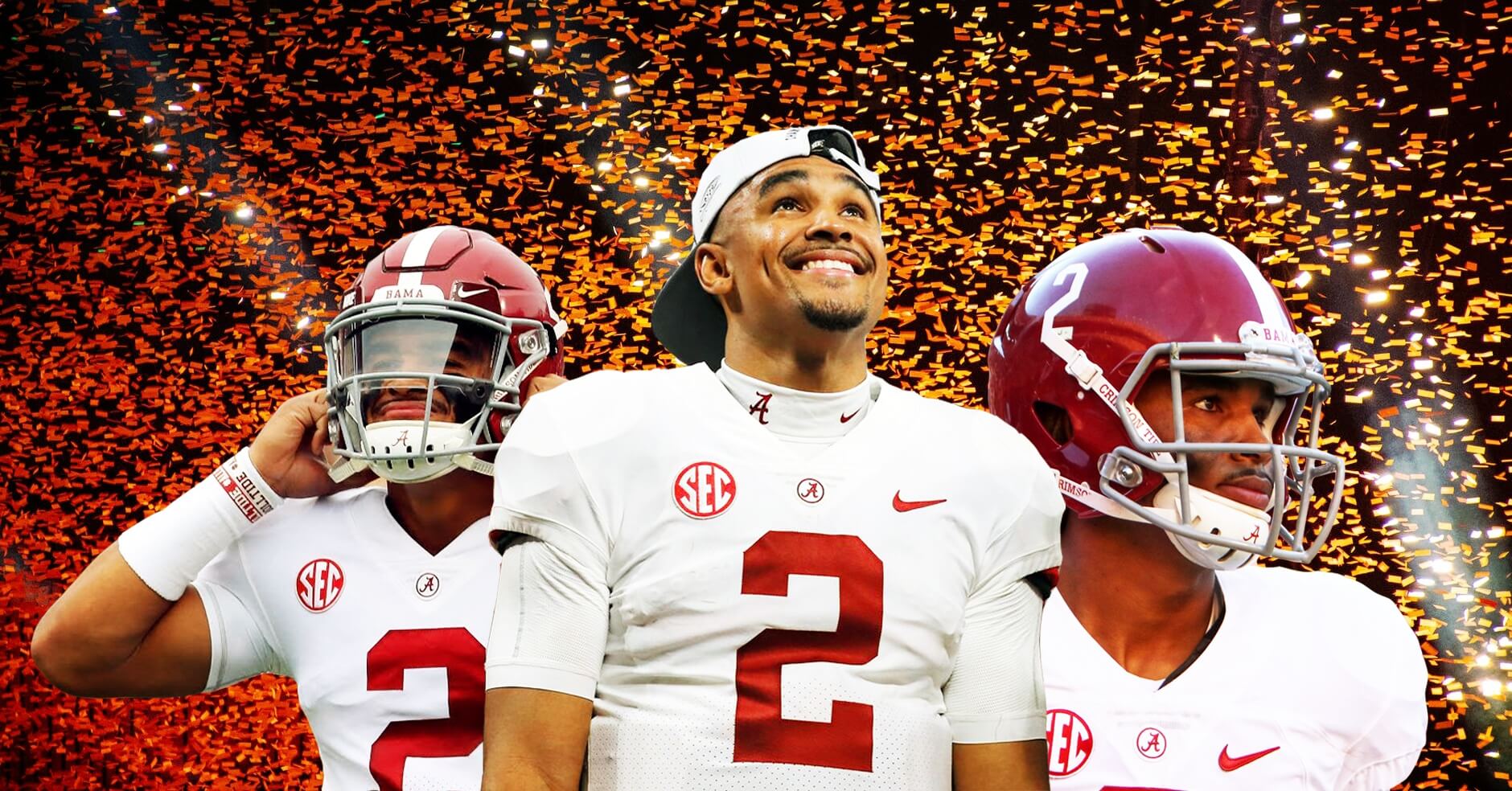 On January 8th, 2018 Alabama starting QB Jalen Hurts ran into the locker room at Mercedes-Benz Stadium in Atlanta down 13-0 at the half against a high-powered Georgia Bulldogs team.

His play in the first half was mediocre, but what he’d soon experience would almost certainly break any athlete in his position.

When the Alabama offense took the field for the second half, Hurts stayed on the sideline. Instead, the highly-touted freshman QB Tua Tagovailoa took the snaps. Tua would go on to lead Alabama to a comeback victory over Georgia in overtime and win their second National Championship in three years — adding to their dynasty.

While the world watched Tua steal the show, they couldn’t help but notice the sportsmanship of Jalen Hurts. The entire time, he stood there being a great teammate, cheering on the guy who just took his starting job.

Right here is servant leadership personified. Watch Jalen Hurts give his support and confidence to the QB who replaced him in the National Championship.

Selfless teams are filled with selfless players, and they can overcome anything. #CFPNationalChampionship pic.twitter.com/3PvIxq2FYi

Would Jalen Hurts transfer? Would he leave everything he helped build over the last two years?

Even Hurts’ own father threw out the notion that his son would be “the biggest free agent in college football history”. When Jalen Hurts made his decision to stay at Alabama (where he’d remain second string) it was a bit of a shock.

But it wasn’t until Week 5 this year that he’d gain the ultimate respect of his teammates. Per NCAA rules, an athlete is allowed to play in up to 4 games and still retain that year of eligibility if he were to transfer.

On that fall Week 5 game against the Ragin’ Cajuns of Louisiana-Lafayette, you could spot Hurts on the sideline, as usual, dressed to compete.

That was the moment he sealed his legacy as the ultimate teammate — the guy who will do anything to win.

Jalen Hurts enters his 5th game of the season, which eliminates the possibility of a redshirt. pic.twitter.com/5Hl0o9eHIy

Hurts even underwent a minor ankle procedure from a sprain in mid-October. Then, he did everything in his power to get back to 100%, staying prepared for the time his moment came.

Fast forward to yesterday. That moment did come.

Jalen Hurts and Alabama had another date with the Georgia Bulldogs in Mercedes-Benz Stadium, this time for the coveted SEC Championship. While the setting would be familiar to Hurts, the circumstances were not.

He started on the bench, just as he has all season, doing everything he could.  Anything to help his team win.

But things looked bleak on the field.

Tua struggled to get the offense going and, at the start of the 4th quarter, it appeared the Alabama Crimson Tide would be dethroned as the #1 team this season, a ranking they’ve held since the beginning of the year.

In the middle of the 4th quarter, down 28-21, Alabama started to put together a little bit of a drive. That is, until Tua’s ankle injury. An ailment that would hold him out from the remainder of the game.

Things have finally come full circle. The guy who couldn’t get it done against the Bulldogs in the National Championship now stood at the forefront of a comeback against the same team.

The commentators guessed that Alabama would start Hurts out with a few short, quick passes to get him going. After all, he’d only thrown 58 passes all season, playing only at the end of big-time blowouts.

But Hurts had other plans.

He hit his tight end for a 13-yard gain. Then, on third-and-five, he found receiver Jaylen Waddle for 23 yards. A few plays later, he ran for a first down.

Then he threaded a tight spiral to Jerry Jeudy on at the edge of the end zone, tying the game at 28, leading millions to think it was too good to be true.

Georgia’s ensuing drive stalled at midfield, and a botched fake punt gave the Crimson Tide incredible field position with the clock winding down.

Hurts drove his offense down the field and capped it off with a touchdown of his own, a quarterback draw from 15 yards out to give his team the lead with just over a minute left.

The camera panned to the Alabama sideline, where it caught Hurts and Tua sharing the moment — two men whose careers will forever be intertwined.

First player to congratulate @JalenHurts after his go-ahead touchdown?

Did he just do that? Did Jalen Hurts do the unthinkable?

Finally, the clock struck zero, completing one of the greatest underdog stories in college sports in the matter of a year. With millions watching.

Here’s a young man who could’ve easily left Tuscaloosa and no one would’ve blamed him. But instead, he stayed and stood in silence, facing the noise head-on.

Hurts didn’t care what the critics said about his decision to stay and virtually watch his career disappear. He just went about his business every day like a true professional, knowing that if his opportunity ever came again he’d be ready to seize the moment.

With the stadium cleared, the stage gone, and the celebration underway, Jalen Hurts sat on the set of the SEC Network to speak on the postgame show.  Tim Tebow asked him about how it felt to come full circle.

“But I’m blessed to be graduating on the 15th and not many people realize how important that is to me, so I don’t think transferring was ever a thing.”

We can all learn some lessons from Jalen Hurts.  Never quit, don’t shy away from adversity, and stay humble.

Kudos to you Jalen Hurts. You are a shining example of what makes sports so great.