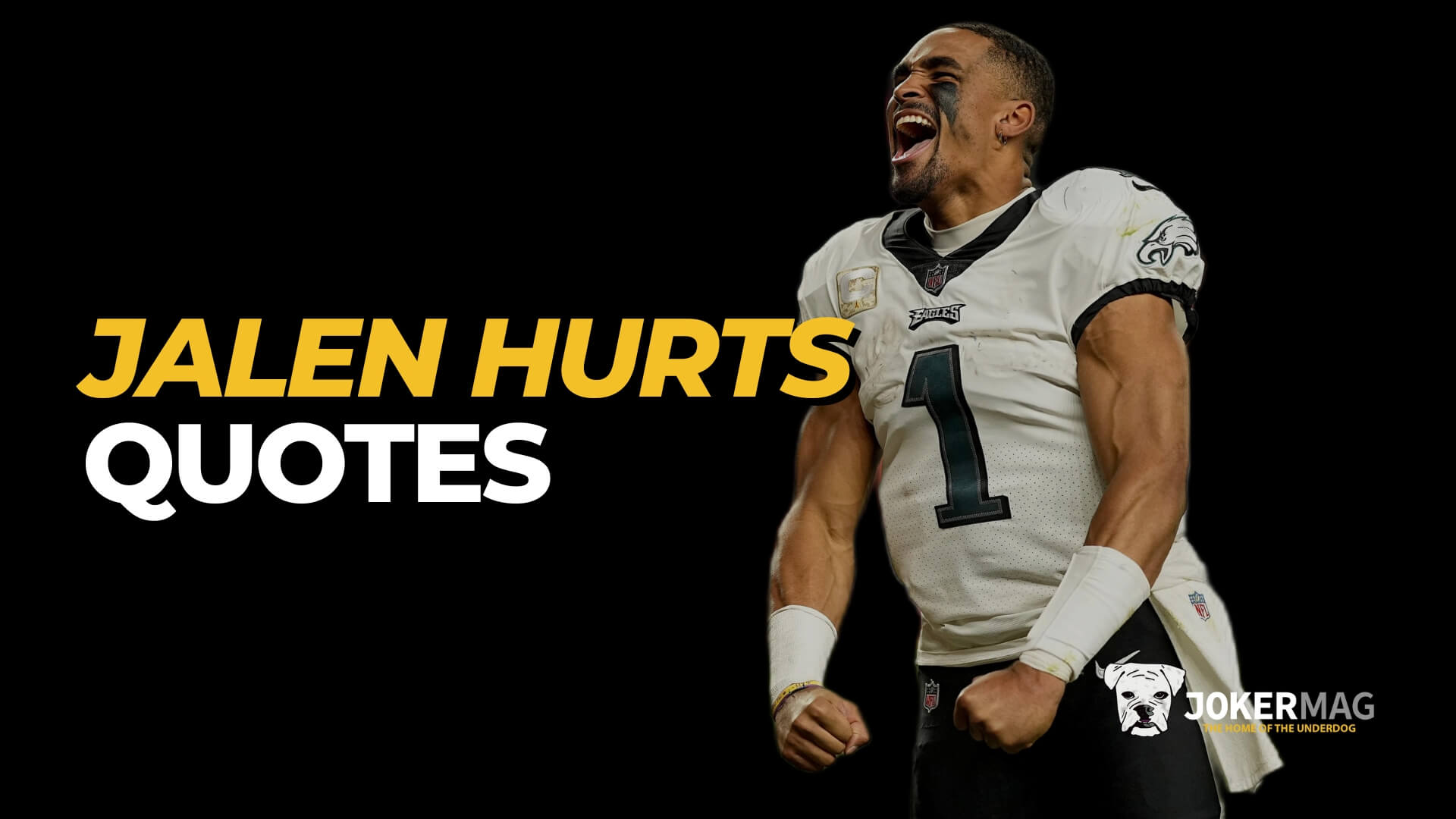 Jalen Hurts is used to being counted out:

After overcoming all of that, football pundits still questioned whether he could be a franchise quarterback in the NFL.

Jalen Hurts responded by letting his play do the talking. And he’s remained a humble, selfless leader the whole way.

Here is our collection of the best Jalen Hurts quotes of all time – sourced from pre-game speeches, post-game interviews, and media appearances throughout his career.

The Best Quotes from Jalen Hurts

1.) “I respect this grind, I respect the process, and I respect what it takes to be great.” – Jalen Hurts

2.) “We have a standard for ourselves and it only rises.” – Jalen Hurts

3.) “No one expected the kid from Houston with the long dreadlocks to take over, and that’s exactly what I did.” – Jalen Hurts

4.) “The most important thing is to be where your feet are.” – Jalen Hurts

5.) “I’ve been blessed to grow, learn things, and just mature. And I know God has been there the whole entire way.” – Jalen Hurts

6.) “I just want to set the right example, and I want to be remembered as someone who made a difference…It’s something that I think about every day.” – Jalen Hurts

7.) “I admire anyone who puts their head down and works for what they want.” – Jalen Hurts

8.) “It takes everyone. No man is an island, you must draw your strength from others.” – Jalen Hurts

9.) “People lead because their peers let them lead. And I’ve just tried to lead by example and gain the respect of my teammates.” – Jalen Hurts

10.) “We don’t worry about external factors. We control what we can.” – Jalen Hurts

13.) “I know that there are tons of different things that are said, but I don’t hear them. I don’t listen. I don’t look for it. I just come here. I come to work. I do my job. I strive to grow in doing my job every day.” – Jalen Hurts

14.) “With the opportunity I have, I just wanna share some light, and show these kids that you don’t have to choose the wrong way. You can do anything you put your mind to.” – Jalen Hurts

15.) “When you look yourself in the mirror as a man and say, ‘I’m gonna control the things I can control’…that’s how you get better.” – Jalen Hurts

19.) “It takes a group effort and together everyone achieves more.” – Jalen Hurts

20.) “Never get too high, never get too low. Take it day by day, and just continue to learn.” – Jalen Hurts

22.) “I feel if you step into any situation and you’re able to play your game, be confident, have a poise you need to have, you’ll be alright.” – Jalen Hurts

Is there a Jalen Hurts quote we missed? Let us know on Twitter.