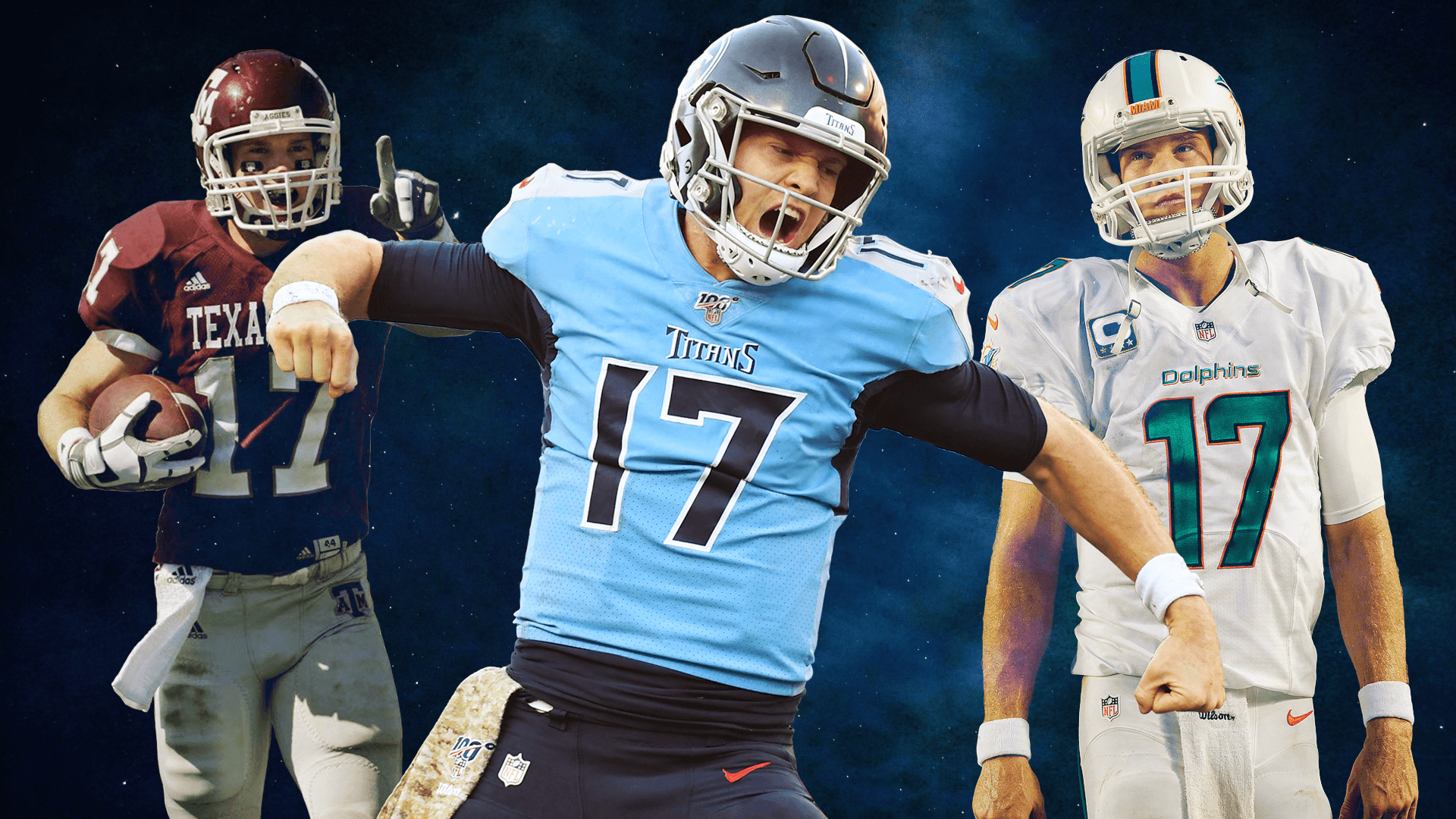 “Control what you can control and make the best of whichever situation you’re in.” That’s what 32-year-old quarterback Ryan Tannehill told Rich Eisen was the biggest lesson he’s learned in his career thus far.

That mindset has been a theme throughout his entire football career. And it’s guided him on the long and winding road to get to where he is today.

On October 23rd, 2010, Ryan Tannehill took over at quarterback for Texas A&M.

Despite having been a wide receiver for the first two and a half years of his college career (and leading the team in receiving). Despite losing the quarterback battle to Jerrod Johnson, the Aggies’ all-time leader in both passing yards and passing touchdowns, two years prior. And despite the fact that just moments earlier, Johnson had broken Texas A&M’s career record for total offense.

“I knew it would come some time or another,” Tannehill told Tulsa World of his second chance. “I guess I wasn’t expecting it to come this year. But the opportunity arose, and you have to make the best of your opportunities.”

Tannehill did make the best of it, completing 12 of 16 passes for 155 yards and three touchdowns, adding a fourth score with his legs. Then, the very next week, in his first start as a college quarterback, the redshirt junior shattered his predecessor’s single-game passing yardage record.

He went on to lead the Aggies to wins in each of their final five regular-season games. And for the next one and a half years, Ryan Tannehill molded himself into a legitimate NFL prospect.

While football pundits across the nation may have felt Tannehill succeeded in spite of his transition from wide receiver, he believes he succeeded because of it.

“I can relate to receivers in a way that most other quarterbacks can’t,” he told Reuters in 2012.

“I’ve been in their shoes, I’ve run the routes that they’re running. I think it helps relate to what they’re doing and helps me put the ball in a place where I like to get it when I played receiver.”

Unlike many quarterback prospects who are locked into that position from their youth, Tannehill was a jack of all trades at Big Spring High School in Texas. He bounced all over the field – playing defensive back, punter, receiver, and quarterback.

Simply put, he’s an athlete with a well-rounded understanding of the game. But while he and his coaches saw this as an advantage, NFL scouts felt it was a drawback.

You know what they say: “…master of none.”

Leading up to the 2012 NFL Draft, analysts criticized his lack of experience under center. His ability to read defenses was also a concern.

Miller capped off his report with an NFL comparison to Ryan Fitzpatrick (who ironically would go on to become Tannehill’s replacement in Miami in 2019).

With highly-touted prospects like Landry Jones and Matt Barkley both returning to school for their senior seasons, the draft was hungry for quarterbacks.

Many experts felt this demand was the reason Tannehill lept into the first-round discussion. They thought he truly graded out as a Day 2 selection.

In other words, he didn’t deserve the hype. After all, he was no “sure thing” like top-2 locks Andrew Luck and Robert Griffin III.

But the A&M product didn’t take the criticism personally, telling Walter Football, “I want to be the best I can be. There are always going to be people who don’t believe in you the way you believe in yourself.”

“It is my job to go out there every day and try to become the best quarterback I can, and hopefully show people on March 29th what I can do.”

Despite all the pre-draft debate, the Miami Dolphins made Ryan Tannehill the 8th overall pick of the 2012 NFL Draft. As he walked across the stage to shake hands with Roger Goodell, the ESPN draft broadcasters gave their opinions on the selection.

“Basically, [he] needs a lot of work. In Miami, [then-Dolphins OC and Tannehill’s coach at A&M] Mike Sherman will develop him. He’ll sit behind Matt Moore or David Garrard. And in his second year, or the third year – when they think he’s ready – then we’ll see what Ryan Tannehill has to offer.”

But the Dolphins didn’t follow that gameplan. Instead, they threw Tannehill right into the fire – he started all 16 games his rookie year.

As just the third quarterback in franchise history selected in the first round – behind Hall of Famers Bob Griese and Dan Marino – he had a lot resting on his shoulders.

After an up-and-down rookie season, Tannehill came back hungrier than ever for his second year in Miami.

Wide receiver Mike Wallace, who the team gave $60 million that offseason, told USA Today, “I see a guy who just wants it. I see him in the weight room. I see him on the field. He comes to work like he’s a seventh-round draft pick, but he’s a leader.”

That extra work paid off, as Tannehill doubled his touchdown total and upped his completion percentage. Unfortunately, it wasn’t enough to lead Miami to the playoffs.

That offseason, the team fired offensive coordinator Mike Sherman, Tannehill’s coach since college. So, for the first time since high school, he was forced to learn a new playbook.

But this wouldn’t be the last time. In the next five seasons, Tannehill played under four different offensive coordinators and three head coaches.

He’d pick up a new playbook, get comfortable in the system, and then – within a year or two – everything would change again. In 2017, NFL Network brought in two former players who explained the difficulties of learning an NFL playbook.

For Tannehill, there was no consistency and no continuity. Not exactly a recipe for success.

And then came the injuries.

After starting all 16 games in his first four seasons, a partially torn ACL derailed his 2016 season. The same year he helped lead the team to their first playoff berth in eight seasons.

Then, in August of 2017, his knee buckled again, requiring season-ending ACL surgery.

Returning in 2018, Tannehill battled a shoulder injury that forced him to miss the middle chunk of the season. He finished what turned out to be his final season in Miami with 1,979 passing yards, 17 touchdowns, and 9 interceptions.

While this was by all accounts a minor transaction, critics made sure to throw in some parting shots.

During his time in Miami, Tannehill’s impending “breakout season” became a running joke among sports journalists.

And with the trade, the football world all but closed the book on Tannehill (and his potential breakout).

He’d be a veteran backup, experienced mentor, and insurance policy for the oft-injured Marcus Mariota. He’d collect a paycheck and stay out of the national spotlight.

So for the first time since college, Ryan Tannehill entered the season as a second-string quarterback.

“That was a different situation for me…you know, tough,” he told Rich Eisen in December of 2019. “Going into the season, it was an adjustment. [I] just kind of had to find my way. It was all new for me.”

But he took it all in stride, helping Mariota wherever he could. During games, he wore an earpiece to hear the offensive coordinator’s calls.

“I get to see the game from a different perspective being on the side,” Tannehill told A to Z Sports Nashville. “I’m not getting hit, and there’s not a lot of pressure on the sideline. So I have the ability to see throughout the whole play on what’s going on.”

Tannehill watched from the sideline as his team got off to a 2-3 start. Then, in a Week 6 matchup against the Denver Broncos, the Titans offense went from slow to anemic.

The former No. 2 overall pick couldn’t get anything going. Then, seven minutes into the third quarter, a costly interception sealed his fate.

The performance was enough to convince head coach Mike Vrabel to hand him the reins.

Tannehill took over a 2-4 team averaging just 16.3 points per game. The offense could barely move the ball downfield.

After taking the helm, he quickly transformed the Titans into a bonafide playoff contender. The Tannehill-led offense is explosive, averaging over 30 points per game. The eighth-year veteran played with a confidence and pocket presence we’ve never seen from him before.

With a 7-3 record under center, Tannehill led the league in passer rating (117.5). After throwing for 391 yards and 3 touchdowns in Week 14 against Oakland, he won AFC Offensive Player of the Week.

What’s been the key to his success? “I enjoy playing a lot,” Tannehill told Titans senior writer Jim Wyatt.

“It’s definitely a different aspect of just not taking the little things for granted, being on the field and just enjoying every second that I get in preparation and competing with the guys.”

What Does The Future Hold?

In 2019, Ryan Tannehill took over a losing team, clinched a playoff berth, and helped bring them all the way to the AFC Championship game.

His miraculous playoff run included a stunning win over the New England Patriots in Foxborough and a blowout victory over the seemingly unstoppable Lamar Jackson-led Ravens.

NFL teams wouldn’t typically build around a 32-year-old quarterback. But Tennessee has the pieces to do so.

In 10 regular season games, the Tannehill-to-Brown connection resulted in 778 yards and 6 touchdowns.

“He’s done a great job by hitting me in stride and giving me a great opportunity to run after the catch,” the rookie receiver told ESPN. “When you get the ball in your hands, you have a lot of confidence. It’s like a thrill.”

Ryan Tannehill has come full circle. And at 32-years-old, he’s better than ever – proving once again that you can never count him out.