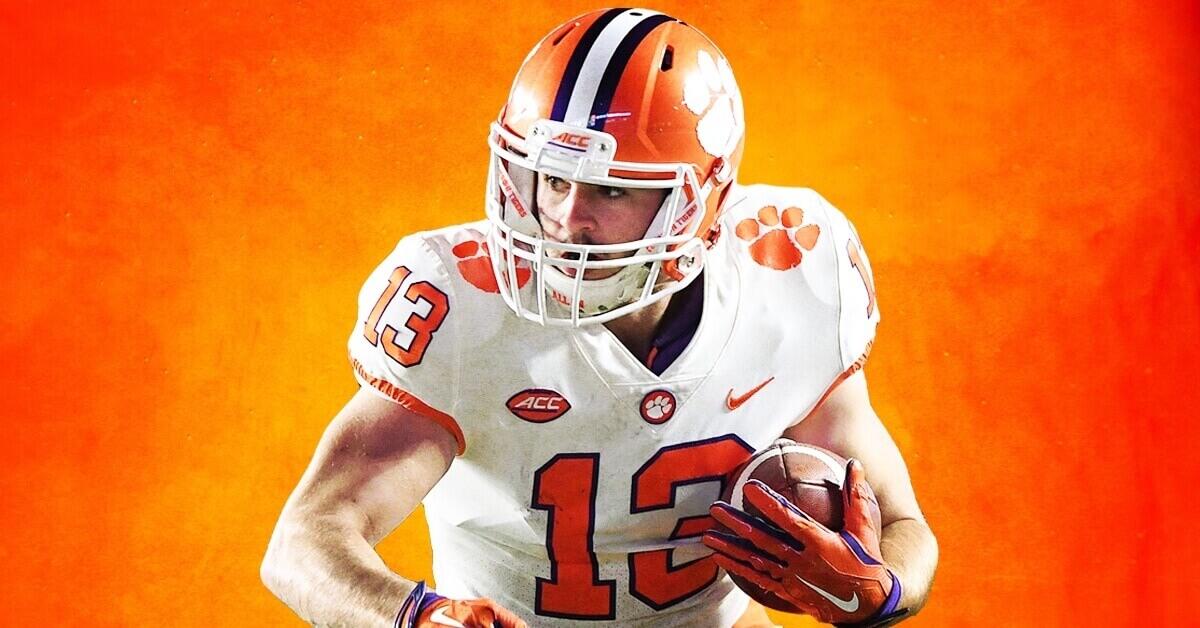 What do Appalachian State, Gardner-Webb, Presbyterian, and Wofford all have in common? Out of all the colleges across the United States, these four schools were the only ones to offer Clemson wide receiver, Hunter Renfrow, a scholarship to play football.

Per Rivals.com, Hunter Renfrow was a two-star recruit from Myrtle Beach, South Carolina. His size was a major factor in why only four schools offered him a scholarship.

At 5’10” and 155 lbs, Renfrow surely didn’t have the look to play college football at a top school. But that didn’t matter to him. He passed up on those offers to walk on at a school many of us know quite well: Clemson University.

Hunter Renfrow knew he could play in a Power Five conference and wasn’t going to let anything stop him.

As a redshirt in 2014, Renfrow worked his butt off to get better in every way possible. And it paid off greatly, as in 2015 the walk-on gained 20 pounds and earned himself a scholarship.

In his first scholarship year, Hunter appeared in all 13 games, starting 10 of them. He had himself a decent season with five touchdowns, finishing just short of 500 receiving yards. While no one outside of Clemson really knew who Hunter Renfrow was, the world would soon find out.

Beneath the late January sky, Renfrow and his Clemson Tigers beat the University of Alabama in the National Championship Game. In a back and forth contest, it was Hunter Renfrow’s touchdown catch from QB Deshaun Watson that put the Tigers on top.

That’s where the legend began.

186 catches, 2,133 yards, countless touchdowns, and a couple of national championships later, Hunter Renfrow now faces his biggest test yet — playing in the NFL.

While Clemson is often referred to as “Wide Receiver U”, Hunter Renfrow is nowhere near the level of some of the greats that came before him. Compared to Sammy Watkins, DeAndre Hopkins, and Mike Williams, the physique and natural skill level is not even close.

But, many coaches still think he can be successful in the NFL. Boston College head coach Steve Adazzio says that Renfrow reminds him of Patriots receiver Julian Edelman.

“He’s tough, has great change of direction, and elite hands.” High praise from Addazio, who’s coached some of the best college players of this generation.

While his measurements at the Senior Bowl weren’t great, Renfrow was ready to “go show it on the field that I belong and show I can play with these guys”.  And he did just that, catching five passes for 63 yards, adding an 18-yard punt return — the longest return of the day.

After the Senior Bowl, many still doubted his ability to play at the next level. After the NFL Combine, Renfrow’s numbers didn’t scream “we gotta have him,” as they were just average. He benched 225 lbs 7 times, ran a 4.59 40-yard dash, and measured in at 5’10” 184 lbs.

NFL analyst Lance Zierlein believes Hunter Renfrow is “a reliable, sure handed slot receiver who lacks size and speed but creates catch opportunities for himself”.

Some scouts see Renfrow as a Wes Welker or Julian Edelman-type player.

But others, like Rivals.com National Recruiting Director Mike Farrell, wouldn’t go that far.

“Comparing him to Welker, Amendola and Edelman might be a bit much, but I can see similarities in their games. Sometimes it’s not about testing and all that and it comes down to how good a football player is. And Renfrow is a really good football player.”

Many envision Hunter Renfrow as a mid-round pick. But the team that picks him will likely be drafting him on his potential to be mister reliable in the passing game.

One thing is for sure though, Hunter Renfrow has overcome many obstacles to get to this point in his career. One does not simply receive four college scholarship offers and go on to play in the NFL.

Renfrow demonstrates a true underdog mentality, full of determination and grit. If there was anyone who could go from a virtual nobody to NFL star, it’s him.