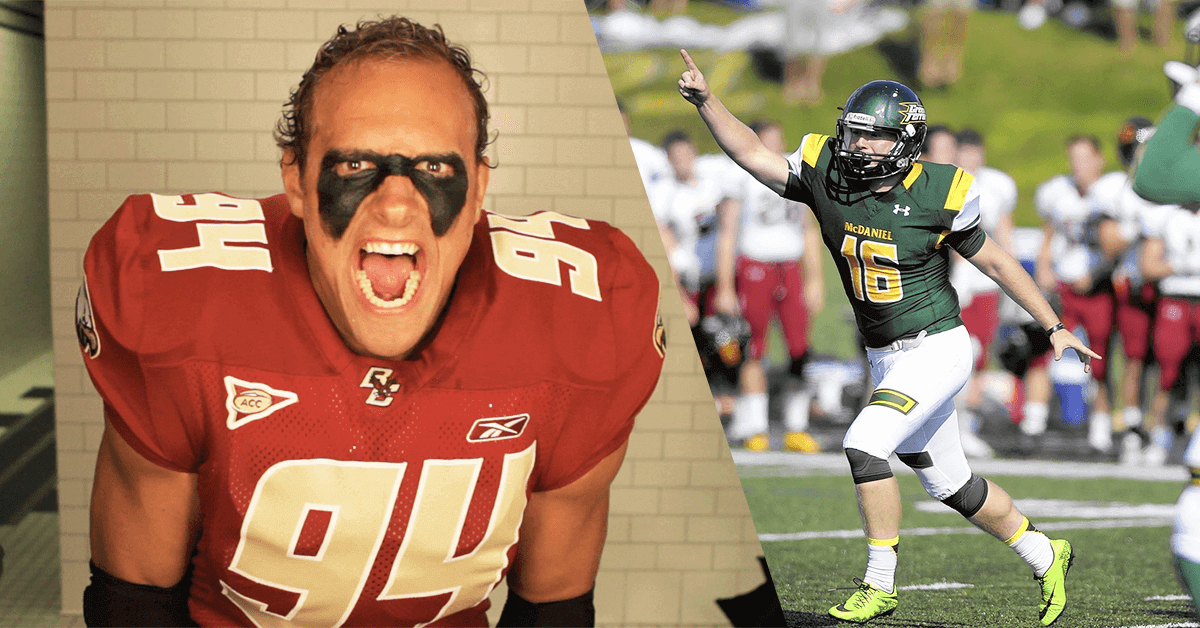 Enter the world of the 2009 ACC Defensive Player of the Year and one of the nation’s top linebackers, Mark Herzlich. As a junior that year, Herzlich amassed 110 tackles and six interceptions as he became the heart and soul of the Boston College’s defense.

After the season, NFL analysts projected him as a first round pick and surefire star linebacker. Instead, Herzlich decided to return to BC for his senior season, surprising most experts and putting the NFL on hold for one more year.

But his journey to the NFL would take longer than expected.

Since he was little, Spencer Wiersberg wanted to be a police officer like his father. Growing up in a police family, he learned the dedication and sacrifice it took to serve a community.

He took those lessons he learned watching his dad and applied them to other aspects of his life, including sports. Wiersberg starred at James M. Bennett High School in Salisbury, Maryland in both lacrosse and football, eventually garnering interest from college programs.

Spencer chose to attend McDaniel College, a Division III school in Westminster, Maryland. There he joined the football team as a kicker.

As a freshman in 2014, Wiersberg split time with a senior, serving as the short yardage field goal kicker and for extra points, while the other kicker handled kick-offs and longer field goal attempts. Wiersberg was a perfect 4 for 4 on field goals and 20 for 22 on extra points that year.

As a sophomore, he took over as the primary kicker in all aspects of the game. Again, he was perfect on field goals, going 7 for 7. Then, as a junior, Wiersberg had his biggest moment on the football field.

In Week 4, the McDaniel Green Terror were playing at home against Ursinus College. McDaniel had been on a 22-game losing streak and were heavy underdogs to the visiting Bears.

But with the score tied at 27 late in the game, the McDaniel offense drove down the field. After going 2 for 2 on field goals earlier in the game and 3 for 3 on extra points, Wiersberg lined up for a career-long 43 yard field goal on the final play of the game.

The kick was good.

As his team rushed toward him in celebration, he ran across the field with one arm raised in the air, having captured the team’s first win since he was a freshman. He went on to be selected as Centennial Conference Special Teams Player of the Week and his kick was nominated for the GEICO Play of the Year in college football.

Not to be outdone, Wiersberg followed his junior year up with an even better senior campaign.

He went 13 for 16 on field goals and a perfect 30 for 30 on extra points and earned an All-Conference selection at the end of the year. By the end of his career, Spencer ranked near the top in all major kicking categories in school history.

Herzlich recalls pain in his leg early that year.

The pain did not subside, so he got an MRI. He and his family hoped it was merely nerve damage. Then the doctor who took his MRI called for him to meet with an oncologist.

That’s when Herzlich’s world turned upside down. He was diagnosed with Ewing’s sarcoma, a rare form of bone cancer that can spread to other bones, and even the lungs.

Herzlich showed great maturity as he laid out his options:

“The worst-case scenario is obviously [that] it gets into other parts of your body and it completely kills you,” Herzlich said.

“Second worst-case scenario is if they saw a small fracture in the bone and it was seeping out. Then they would have to amputate my leg right away within hours of finding it out.”

“Then better than that would be to remove that portion of the leg, putting in a cadaver bone and being in a cast for six months from the waist down, not ever being able to run again,” he continued.

Fortunately, Mark and his family learned that the cancer had not spread. Unfortunately, he was faced with a serious dilemma. Either opt for surgery, leaving his football career behind, or pursue intense chemotherapy in hopes that he one day could return to the gridiron.

But like any great competitor, Herzlich chose to fight the cancer. Ultimately, he decided to go through chemotherapy and, in turn, potentially return to the field, his safe haven.

So many factors played into his decision, with consultation from multiple doctors, family, friends, and coaches. In the end, I want to believe that Herzlich chose the road less traveled so he could return to football.

But at the same time, deep down he wanted to serve as a symbol of hope and optimism for those battling cancer, that one can overcome it, and lead the life they want to live.

To Herzlich, cancer would not dictate his life, and neither should it for anyone else.

His mission was clear:

“I was focused on how I needed to get better but I also knew if I wanted to be myself, I had to be able to play football,” Herzlich said.

Off the field, Wiersberg was just a successful as he was as a football player.

He joined the Sigma Alpha Epsilon Fraternity on campus where he served as the Health and Safety officer, taking care of his brothers and educating them on subjects like the dangers of drunk driving.

His role in the fraternity only strengthened his desire to become a police officer. After wrapping up his senior season, the sociology major graduated a semester early in the fall of 2017. Then Spencer began his journey towards fulfilling his lifelong dream.

Not long after graduation, Spencer achieved that dream.

He became a police officer at the Fruitland Police department in Fruitland, Maryland, a town about 10 minutes away from his hometown in Salisbury. There he began serving his community in the only way he knew how, with the dedication he learned from his father and in sports.

Currently, Spencer is at Johns Hopkins Hospital in Baltimore receiving treatment for his condition.

After seven months and fifty cycles of radiation, with many occasions where Herzlich would have to give himself a shot in the stomach and take many different types of medication, he began to think about football.

During this time, he was a vocal supporter of cancer patients on campus.

The BC community rallied around him, even creating “Beat Cancer” t-shirts with Herzlich’s iconic winged eye black on the Boston College eagle mascot. During his year away from the field, Herzlich won the Disney Spirit Award, the Niles V. “Swede” Nelson Award, and honorary Lott Trophy for his sportsmanship, spirit, and courage fighting cancer.

After missing the entire 2009 season, Herzlich made an emotional return to the field in 2010. He started 13 games, amassing 65 tackles and four interceptions. He also won the Rudy Award for courage and the Brian Piccolo Award, named after former Wake Forrest and Chicago Bears running back Brian Piccolo who passed away in 1970 from cancer.

Once a highly-touted prospect before his battle, Herzlich went undrafted in 2011. But the New York Giants decided to give him a shot.

Herzlich was more than a feel-good story because the man could flat-out play. In his rookie year, he went on to win a Super Bowl with the Giants. All in all, he played seven seasons in the NFL.

Herzlich’s statistics might tell you that he did not have a successful career.

But the fact that he came all the way back from rock bottom to play professional football at the highest level, while at the same time inspiring countless others, is the only statistic you need to know.

And yes, he never forgets how he got to where is today.

“When I was going through the process, I wouldn’t allow myself to fall into that pattern of thinking, ‘Why me?'” Herzlich said. “Then hope would have been lost. You don’t want to lose hope or quit on yourself.

He is a true underdog in every sense of the word. We all face challenges in life, but cancer is different kind of beast.

And if you need help standing back up, there are others — friends, family, and teammates — there to help you. Cancer cannot defeat the collective human spirit and the love that drives it.

Love wins every time. Above all, that’s what Mark Herzlich has shown us.

In the same way the BC community rallied around Herzlich, those around Spencer are coming together to help.

With help from his family, his brothers and sisters in his fraternity, and his police department have set up a group to support Spencer known as Wiersberg’s Warriors.

Today, Wiersberg’s Warriors is selling t-shirts and wristbands to support Spencer and his family. as well as taking any donations to help with his medical expenses and care.

Much like Spencer spends his life protecting and serving those in his community it’s now our turn to return the favor.

If you would like to support Spencer, please see below, or visit the Wiersberg Warriors Facebook page.

This piece was written in collaboration with Evan Callahan, fraternity brother and friend of Spencer Wiersberg.