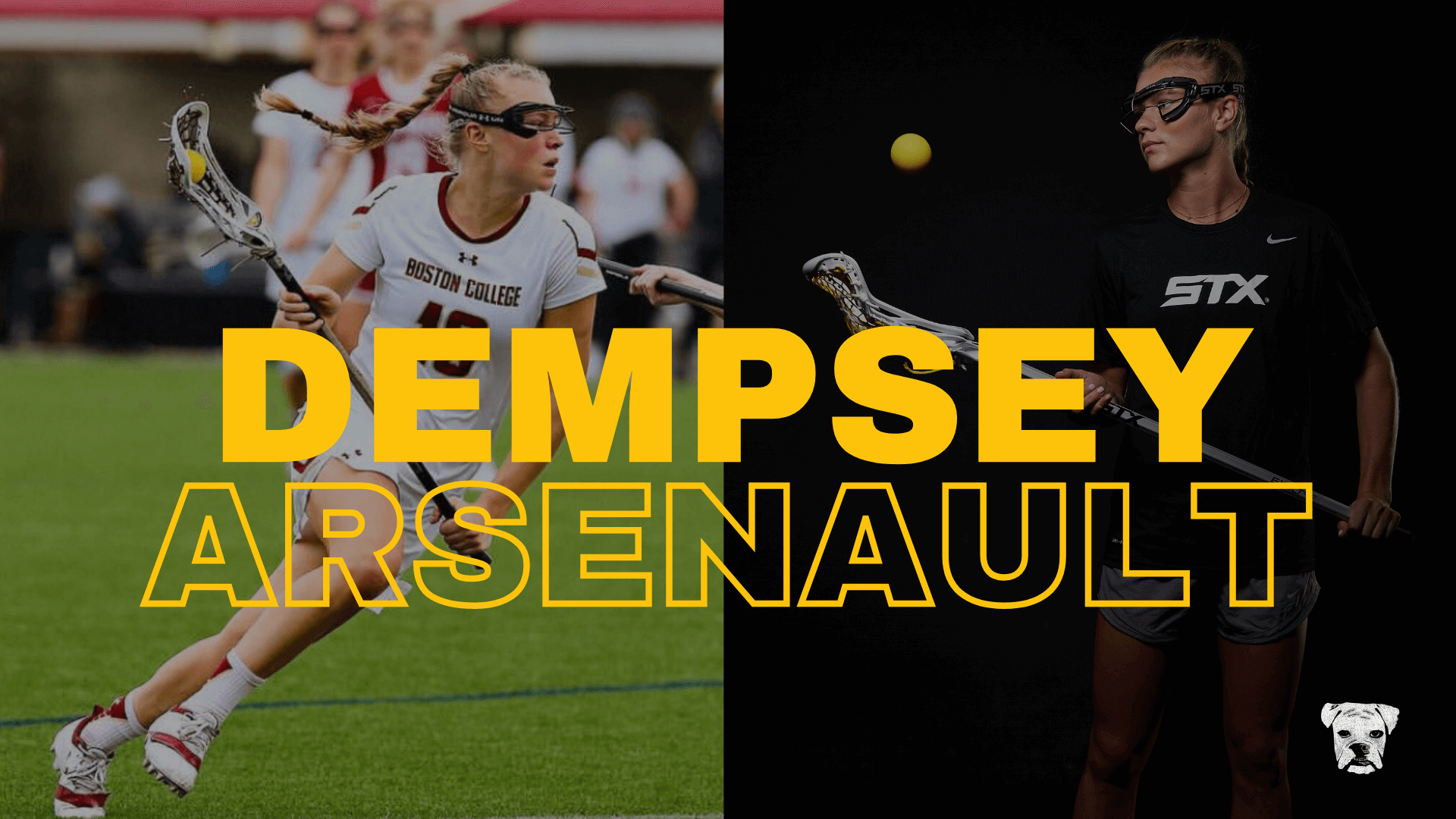 Growing up in New Hampshire never seemed to bring boredom for Dempsey Arsenault. When the season with New Hampton School would end, she’d simply jump right back playing for a local club team.

But before the summer approached, she shined in the spring.

At New Hampton School, the midfielder dominated. In her senior season, Arsenault scored over 40 goals, tailed over 40 assists, and competed in the Under Armour All American Senior Game. She left New Hampton as a three-time Lakes Region All Star and a two-time All American.

In her youth, she competed in rec leagues. Into high school, she played for Granite State Elite (GSE), a club team where Arsenault says she really grew as a player.

She’s a natural athlete. And when lacrosse season ended, she jumped back into field hockey and ice hockey.

When GSE ended during her junior year of high school, she joined the 3d lacrosse program, aimed at further developing players and helping them improve their skills.

It was there that her future in lacrosse faced a serious obstacle.

Arsenault tore her ACL at a 3d tournament in Richmond, Virginia, the summer before her senior year. While she had already committed to college, it was her upcoming high school season that worried her the most.

“In the back of my mind, I was worried about getting back and making it to college,” she remembers of the initial aftermath of the injury. “But honestly, my priorities were making it back for my senior season. I missed my field hockey and ice hockey seasons – my final ones – so that was heartbreaking.”

Shipping Up To Boston

Northern New England, with its beautiful mountain scenery, is known for hockey, skiing, and snowboarding. As Arsenault puts it, “New Hampshire is not a hotbed for lacrosse at all.”

Yet she still received attention from some of the Carolinas’ top Division I lacrosse programs.

Duke University, the University of North Carolina at Chapel Hill, and Elon University traveled well out of their state to recruit Arsenault.

“I went to a Duke overnight camp, and that’s where I got a lot of interest from [those programs],” recalls Arsenault.

Ultimately, she was drawn to a school less than two hours south of her hometown.

“In conversations with [Head Coach] Acacia Walker and the coaching staff as a whole [at Boston College], they talked about the trajectory they saw the program going and me being a part of that,” Arsenault recalls.

“The girls were also so nice. They really seemed like they cared about me as a person.”

So BC it was. With her college decision already locked up, Arsenault had plenty of time to focus on her remaining years in high school. Over two more years, to be exact.

She committed to BC as a sophomore in high school. Nowadays, high school student-athletes must wait until at least their junior year before signing a collegiate letter of intent.

When the Terrapins celebrated their fourth championship in six years, it marked the end of an era for the other side.

After four seasons together, three of the best players in Boston College women’s lacrosse history had just played their final game together.

Dempsey Arsenault, Sam Apuzzo, and Kenzie Kent – also known as “The Big 3” – led the team to three consecutive national championship game appearances. While their collegiate careers ended without a championship, the impact this group made on the BC lacrosse program is immeasurable.

The trio holds numerous records in the program’s record book. In doing so, they’ve made the Eagles a name to be known at the top of the lacrosse world.

“It was so cool playing with them – they’re both such good players,” says Arsenault on her time with Apuzzo and Kent. “We all play so differently; we all brought something different to the table.”

Make no mistake though – this incredible era of BC women’s lacrosse was a total team effort. From 2016-2019, BC posted a 61-11 overall record, including back-to-back seasons in which the team went 22-2.

The Big 3 often took the headlines. Yet Arsenault acknowledges that all of her teammates played a vital role in the team’s success.

“I always felt bad that not enough people got credit,” says Arsenault. “The little things that aren’t stats that all of the other players were doing on the team helped us get more of the spotlight.”

In the spring of 2019, all three graduated from Boston College and went their separate ways. They still keep in contact to this day, despite no longer sharing the field together.

As fate would have it, lacrosse would soon bring the Big Three back together – at least for a moment in time.

With her 2015 spring lacrosse season in jeopardy, Arsenault attacked rehab from the get go. In working with a triathlete in Concord, Arsenault focused on regaining strength in both her knee and leg.

The results? Improvement both physically and mentally.

“That time where I was able to work on my own body – that helped me so much,” says Arsenault. “We did full body workouts where I really had a plan and knew what I was doing. I got so much stronger, so much faster, as a whole. I also used mountain running – one of the perks of being from New Hampshire.”

“I feel like if I didn’t go through my ACL [injury], then I would not have had as much success as I’ve had because of [the injury].”

By the spring of 2015, Arsenault was back on the field for her senior season at New Hampton. Without skipping a beat, she looked like the dominant player of old.

As she was set to embark for college, Arsenault used her injury as further motivation to be the best.

“I feel like one thing that I could control going into BC was being in the best shape possible,” she says. “Taking that injury and having that chance to grow.”

The 2019 WPLL Draft came and went without much celebration.

In fact, Arsenault was completely unaware that the draft was even happening. She’d soon learn that she was the second overall selection by the Brave.

“I remember that the draft happened, and I wasn’t even watching it,” recalls Arsenault. “I had no idea – and then I saw a post that we all [Dempsey, Sam, and Kenzie] went 1, 2, and 3.”

While each level of lacrosse has brought its own share of challenges for Arsenault – some more difficult than others – focusing on mental health has always been an utmost priority of hers.

In a game that requires hours of hard work, sweat, and dedication, the mental side is as important as the physical.

“[Dealing with] confidence and anxiety is definitely something that I’ve had to work on and grow from,” says Arsenault. “It’s been a challenge at times. But one thing that has always grounded me is that when I am on the field, I am happiest.”

Dempsey’s Journey: From Coast to Coast

The WPLL folded operations after Arsenault played just one season in the league. But in that one year, she wasted no time in making it memorable. As the league’s 2019 Most Valuable Player, she tied for the league lead in both points (13) and assists (6). She scored seven goals as well.

Since the onset of the COVID-19 pandemic, Arsenault has not played in a real game in approximately a full year. But this time has also given her new outlets to step out of her comfort zone.

“I’ve been doing a ton of yoga everyday, and trying to be the best version of myself now that I have the time to focus on it,” says Arsenault. “But I’ve been able to do [Zoom] lessons and clinics – connecting with so many different people and seeing the positive impact that I can make.”

Not only is her training helping others, but she is almost making a major investment into herself.

After spending most of her life in New England, she knew it was time to make a giant leap – one that spans over 3,000 miles.

“Taking this risk and seeing it pay off has been so rewarding,” says Arsenault.

In The Golden State, she has been working with a trainer to get stronger and stay in lacrosse shape. When she’s not on the field or playing wall ball, Arsenault has also taken an interest in healthy eating. Finding an edge to improve her game has always been important to Arsenault, but especially now so that college is behind.

Without the busy schedule of a college workout and practice routine, she’s had time to closely research what is best for her body. With these extra hours, she’s also trying to play as much lacrosse as she can.

This summer, she plans to play in Athletes Unlimited’s newest lacrosse league.

“I am excited to play with the best of the best again and finally get back on the field,” says Arsenault.

While games continue to be on halt, she remains focused on her end goal of being the best athlete she can be.

Leading The Next Generation

From her recreational playing days to competing for New Hampton, Arsenault has always used STX lacrosse gear. The Baltimore-based sports equipment manufacturer produces everything from goggles to sticks. Athletes at all levels of the game have used their gear in competition.

Now, Asenault has come full-circle. She is a brand representative for STX, promoting their products frequently on social media. Despite having initial fears about coming off as too “self-promoting”, she has learned a lot from the experience.

“STX has made me more comfortable with posting myself and resharing things,” she says. “It’s building a brand. People want to see this.”

And it’s the people that want to see these products that have made an immense positive impact on Arsenault. She has received many messages from girls who are just getting started in the sport of lacrosse, seeking her advice.

There are so many young lacrosse players who truly look up to Arsenault.

While giving Zoom lessons to these players, there will sometimes be upwards of 40 people on the screen at a time. This may not replicate in-person, on-field demonstration, but the new reality of virtual clinics has taught Arsenault a lot about herself as well.

“It really pushed me to use creativity,” she says. “It was also so cool to see that we’re all in our different places, but we’re able to connect over Zoom.”

Dempsey Arsenault’s lacrosse career has been far from linear. Losing three national championships, getting drafted into a league that soon folded, and teaching lacrosse through a computer screen are probably the last things she expected to happen in a five-year span.

But it’s often the way that one bounces back from adversity that defines success.

For the midfielder from New Hampton, she’s cemented her name in the record book of a top ACC program. She packed up her life and moved to a new city chasing her dream of representing her country on the lacrosse field. And perhaps most importantly, she’s inspired a new generation of lacrosse players who want to be just like her.

Even once her playing days are over, Arsenault’s impact on the sport will last for years.

So while New Hampshire may not be a hotbed for lacrosse, that narrative is changing.

And Arsenault is leading the way.