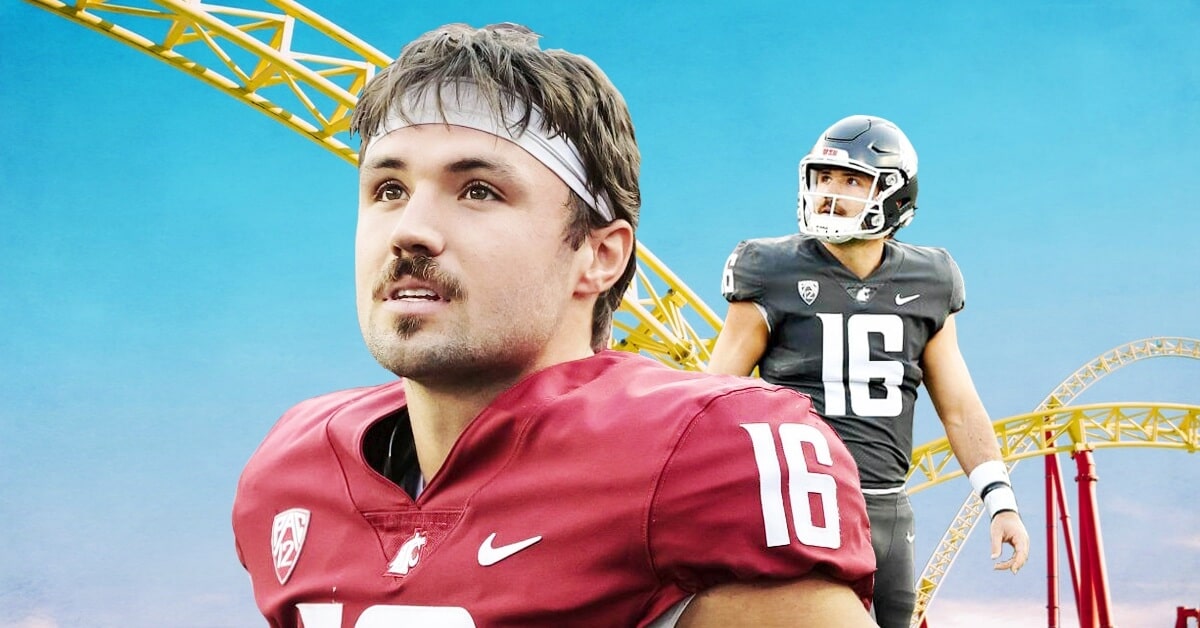 Flowood, Mississippi is home to 7,823 people. It’s the hometown of a Mississippi State Senator, a Medal of Honor recipient, and a soon-to-be NFL quarterback.

No. Flowood is home to Washington State QB Gardner Minshew.

Minshew’s story to position himself as a potential NFL Draft pick is about as unique as they come. It’s been nothing short of a rollercoaster ride, beginning with his high school days.

Despite throwing for 3,541 yards and 31 touchdowns in his senior year, leading his team to the South 6A Championship, and shattering passing records along the way, Minshew did not receive a single athletic scholarship offer.

In fact, he was rated as just a 3-star prospect, considered the 70th-ranked pro-style QB in the nation.

After his senior season in the fall of 2014, Minshew committed to Troy University, enrolling for the spring semester after graduating high school early.

Coming in on an academic scholarship, Minshew thought he found the perfect situation. However, his stay at Troy lasted just a single semester. Then he transferred to Northwest Mississippi Community College, a JUCO boasting over 14 NFL alumni.

It was there that Gardner Minshew made a name for himself. He came right in and led the team all the way to the NJCAA National Football Championship.

They dominated on junior college football’s biggest stage, winning 66-13 over the #2 ranked team in the nation.  Minshew completed 23 of 30 pass attempts for 421 yards and 5 touchdowns.

After showcasing his talent at the JUCO level, he transferred again.  This time to East Carolina University, his third school in as many years.

But despite his list of accolades, there were no guarantees.

During the 2016 season, Gardner Minshew was primarily the Pirates’ backup quarterback. He played in just seven games, two of those as a starter. Then, in 2017, his second season at ECU, he split time with Duke University transfer Thomas Sirk.

In December of 2017, he graduated with his bachelor’s degree.  His undergrad career was over, but he still had a year of eligibility left.

So Minshew committed to the University of Alabama, and since he’d be considered a graduate transfer, Minshew would be eligible to play right away. He made his decision and was all set to join the Crimson Tide.

That is until Washington State head coach Mike Leach got in his ear.

Mike Leach’s recruiting pitch to Gardner Minshew: “You wanna be a backup at Alabama or you wanna lead the nation in passing?”pic.twitter.com/blHiIejdE9

The sales pitch worked, and Minshew settled on the final landing spot in his college career — Pullman, Washington.

No one realized it at the time, but Minshew was about to take the college football world by storm.

In a poignant piece for SB Nation’s Coug Center, journalist Jeff Nusser did his best to find words to describe the unimaginable situation.

“This was their friend who died, and the football season was coming no matter how sad they were. And the guy who was supposed to be leading them through the preparation was the guy who was gone.”

A few weeks ago, Minshew spoke to Dale Grummert of the Lewiston Morning Tribune about his attitude when joining the team.

“I just had to come in and be myself,” Minshew explained.

“Just be respectful of the loss that everybody had suffered. I had no clue what I was going to walk into, how it was going to be. The last thing I wanted to do was be the guy who was really trying to replace somebody. I was going to try to come in and be myself and earn everybody’s respect. And do it my own way.”

And Minshew did just that, leading Washington State to an 11-win season, the best in school history. He broke several school records along the way, ending the regular season leading the country in pass completions, pass attempts, and finishing second in passing yards.

At the conclusion of their Alamo Bowl victory over Iowa State, Minshew stood at atop the leaderboard for single-season passing yards in Pac-12 history, a record previously held by current NFL Pro Bowler Jared Goff.

After the season, Gardner Minshew won Pac-12 Offensive Player of the Year and finished fifth in the Heisman Trophy race, the highest for a Washington State quarterback since Ryan Leaf.

Now that Gardner Minshew’s roller coaster of a college career has come and gone, his focus shifts to the NFL Draft. What once seemed like a pipe dream for a quarterback with zero scholarship offers has now become a reality.

Minshew is listed as a 6’2” 220 lb quarterback, which is an ideal size for the position at the next level. Where Minshew really impressed was with his arm strength and to be able to show it off on the national stage paid off greatly for him.

A majority of draft pundits believe Minshew will end up as a Day 3 selection.  Many view him as someone who could learn from sitting behind a veteran QB for a few seasons.

For now, though, Gardner Minshew will get a chance to improve his stock at the 2019 Senior Bowl on January 26th.

Just 12 months ago, he was preparing to spend his final year of eligibility on the bench at Alabama. Today, he’s an NFL Draft prospect.

His journey embodies the true power of the underdog mentality. Stick to your mission. And never give up.  It will take you far.