Fallen Angels: Another Lost Season for the Halos

The Angels and Mike Scioscia entered the 2018 season coming off back-to-back losing years, failing to reach the postseason for three straight seasons. Los Angeles hasn’t even won a postseason game since 2009.

However, the additions of Shohei Ohtani, Zack Cozart, and Ian Kinsler, along with the resigning of Justin Upton, and a healthy Mike Trout had La La Land abuzz. Could the Angels finally claim supremacy over their crosstown rivals, the Dodgers?

Could they take control of the division with the reigning world champion Astros, up-and-coming Mariners, and perennially competitive A’s?

Those additions have not been enough to propel the Angels into contention in the AL West, as they currently sit in 4th place with a 64-69 record. So what went wrong for GM Billy Eppler and manager Mike Scioscia? 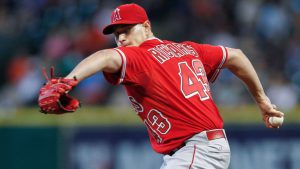 Unfortunately, it has been yet another forgettable season for the Halos’ rotation. The pitching has been decimated by injuries, with 8 pitchers currently on the 60-Day DL, 5 of whom have undergone the infamous Tommy John Surgery.

Due to the rash of injuries, Mike Scioscia has been forced to use a whopping 15 different starting pitchers this season, and 34 total arms altogether. Not a recipe for success — unless you’re the Tampa Bay Rays.

Their team ERA sits at 4.10, good for 16th in the league. But the long ball has really done them in, as they’ve surrendered 173 total bombs, tied for 4th most in the majors with the cellar-dwelling Kansas City Royals.

The injuries have forced Scioscia to call on ineffective replacements to fill in. The Angels’ bullpen has had to consume 509.1 innings, 2nd most in the AL behind the Rays, who are doing it intentionally.

The Angels entered the season with enviable pitching depth. Garrett Richards, Shohei Ohtani, Matt Shoemaker, Tyler Skaggs, JC Ramirez, Parker Bridwell and Andrew Heaney all figured to play a role. But those 7 starters have managed just 74 starts of the 133 games — just 55% — that the Angels have played.

Mike Trout has done Mike Trout things, per usual. Despite his short DL stint in early August, the future Hall of Famer has managed to post a WAR of 8.1, good for 2nd in the league behind AL MVP frontrunner, Mookie Betts.

The offseason acquisitions of Cozart and Kinsler have not panned out well by any means. Cozart hit just .219 before succumbing to a torn labrum, and Kinsler was shipped off to Boston after posting his 2nd consecutive sub .240 average season. Overall, the Angels have received below average production at catcher, first base, second base, third base, and right field.

Having the best player in the league is simply not enough to mask the deficiencies around him. The Angels have managed to give 100 at-bats or more to the following players, all of whom are hitting under .230:

Despite the lack of production throughout much of the lineup, Los Angeles is still putting up a respectable 4.55 runs per game, which is good enough for 13th in the majors.

It’s safe to say things would be a bit different if the team wasn’t hit as hard by injuries. The team has managed to stay respectable, hovering around .500 despite the barrage of DL stints. Losing your number 1 and 2 starter, Richards and Ohtani, is a morale killer for any clubhouse.

The team is 16-9 when either of those two take the mound — a .640 winning percentage. But the Halos also have one of the best defensive squads in the game. They’ve committed the 4th fewest errors (54) and are also 6th in the league in BIS-defensive runs saved (42).

Andrelton Simmons can be thanked for the latter, as his defensive ability is valued at 17 runs saved. They have outscored opponents 605-582, a +23 run differential, which is far superior to teams with winning records such as the Phillies (+1), Rockies (-13), and their divisional foe Seattle Mariners (-43).

Clearly, luck has not been on their side this season.

What Does The Future Hold? 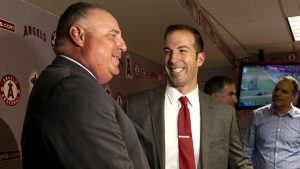 With the news that Mike Scioscia will walk away from the team following the season, an era will end in Tinseltown. Scioscia has managed the club for 19 consecutive seasons. With the team stuck in mediocrity, perhaps a change will provide a much needed spark for the club.

GM Billy Eppler is entering the last year of his contract in 2019, which should prioritize the need to bring the Halos back to the October baseball. 2019 will be a pivotal season for the team. Multiple contracts are coming off the books, and the team will enter the offseason with a guaranteed $116MM on the payroll, not including arbitration eligible players.

Albert Pujols’ contract continues to hamstring the team’s financial situation, as he’s accounting for $28MM against the club next season. Owner Arte Moreno is not shy about spending money, as the team has finished with at least a top-8 payroll in baseball in every season since 2004.

However, he’s stopped short of exceeding the luxury tax threshold, which will limit Eppler’s expenditures. The team will need significant internal improvement, a clean bill of health from its key contributors, and notable outside acquisitions to get back to competing in the ultra competitive American League West.

The Angels can’t afford to continue to waste the talent and prime career years of Mike Trout. After all, he’s only under team control through 2020. If the team continues to struggle during the rest of his tenure, will it also signal the end of his Angels career?

That’s a question that the organization and its fans do not want to have to think about.

What’s your prediction for the future of the Los Angeles Angels? Comment below.