3 Overlooked MLB Lineups That Could Do Damage in 2018

In just eight days, the first pitch of the 2018 season will be thrown.  This one pitch will open the floodgates, sparking a remarkable series of events that will last the better part of seven months.

This season, there will be roughly 165,000 at-bats, 42,000 hits, and over 6,000 home runs.  All offseason, baseball’s newest “super team” has captivated fans everywhere.  The mighty Giancarlo Stanton joins the “Baby Bombers” in New York.

Sure, the Yankees will hit their fair share of home runs.  So will the Indians, Cubs, Dodgers, and Red Sox.  But what about the rest of the league?  After all, there’s plenty of power to go around.

Here’s a look at some of the most underrated lineups heading into 2018.

Anchored by Khris Davis, who is quietly coming off of back-to-back 40 home run seasons, the A’s roll into this season with a very young lineup.

23-year-old first baseman Matt Olson was the West Coast version of Rhys Hoskins last season.  In just 59 games, the young slugger whacked 24 homers.  It’s exciting to imagine what Olson can do with a full season’s worth of at-bats.

Further down the lineup, it’s not ureasonable to expect 20 home runs out of both Stephen Piscotty and Marcus Semien.  Also, snagging Jonathan Lucroy coming off a down year could pay dividends.  The 32-year-old backstop is just two seasons removed from an All-Star season.

With a mix of steady veterans such as Jed Lowrie and Matt Joyce, the A’s have what it takes to turn some heads in 2018.

Paul Goldschmidt is one of the best all-around players in baseball.  He regularly hits 30 homers and 30 doubles with an OBP over .400.  The man steals bases too — 18 last year and 32 the year before!

But while Goldschmidt is one of the best, every team has their superstar.  What makes the D-Backs stand out is that they’re above-average at almost every position.

Sure, Jake Lamb struggles against left-handed pitching.  But he’s hit nearly 60 home runs over the past two seasons and he’s entering his prime at 27.  An outfield of David Peralta, A.J. Pollock, and Steven Souza is pretty good, too.

Despite the new humidor, opposing pitchers will have a difficult time slowing down the D-Backs offense this season.

Let’s make this interesting by breaking down the Angels’ lineup without mentioning the best player in baseball.

The Angels are full of aging veterans with plenty of All-Star appearances to go around.  After bouncing around a lot, Justin Upton has finally found a place to stay, inking a 5-year deal to remain in Anaheim.  He brings 35-home run power and is only 30-years-old.

Ian Kinsler is still a solid bat at the keystone, even at age 35. Albert Pujols is in the twilight of his Hall of Fame career, but he’s still capable of hitting baseballs over the fence.

Along with the seasoned vets, the Angels’ left side of the infield features two players coming off career years.  Zack Cozart pushed close to the .300 clip while hitting an even 24 homers and 24 doubles.  Andrelton Simmons smacked 38 doubles and 14 homers.  The two combined for nearly 9 wins above replacement on offense last season.

On top of this solid young core, the Angels landed “Japan’s Babe Ruth”.  Shohei Ohtani is unproven at the highest level, but anything he adds with his bat should be considered a bonus.

What lineup do you think will do the most damage in 2018? 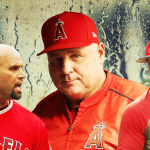 Fallen Angels: Another Lost Season for the Halos