The Tampa Bay Rays have garnered the attention of quite a few people this season, something largely unfamiliar down at The Trop. The media, players, and fans are all mixed in a frenzy with the team’s new approach to their starting rotation.

What exactly are they doing? And how has it worked for them thus far?

Tampa Bay is shying away from the typical 5-man rotation that we’re so accustomed to seeing. Instead, manager Kevin Cash is taking a different route.

With his core group of established, veteran starters like Chris Archer and Blake Snell, he’s staying true, not altering their schedule much, and allowing them to pitch deep into games per usual.

But the experiments have come when these guys are not on the bump. Cash is going into games where he uses only the bullpen, rolling without a traditional starter.

Long relievers tend to start the game, where he hopes to get 3-4 useful innings out of them. Then, he calls on the ‘pen to chew up the remainder of the game.

He’s gone straight to matchups to open the game on several occasions, opting to bring in his “starter” or long man after the first inning.

The strategy is being met with strong opinions from players and managers, reacting to this challenge of the status quo. Angels infielder Zack Cozart chimed in, stating, “I don’t think that’s good for baseball… It’s Spring Training, that’s the best way I could describe it”.

Texas reliever Jesse Chavez went even further, asserting, “It’s not baseball”. Former Rays skipper, and current Cubs manager Joe Maddon gave his thoughts on the situation: “To see that becoming a part of the norm, I doubt it…I think you’re going to wear out bullpen dudes if you do something like that”.

On the surface, these reactions seem to have merit. But how have the Rays fared in their trial by fire?

#Rays relievers are getting it done.

The collective team ERA sits at 3.81, ranking a very respectable 12th in the MLB. The starting pitching ERA is 13th in baseball, with a 3.99 ERA in 340.2 IP. The innings pitched number is dead last in baseball by a wide margin.

Astros starters, who lead the league in innings, have managed to eat more than 487 of them, which is 147 IP more than the Rays.

To give you an idea of the disparity between these two teams, Tampa Bay starters would have to throw 16 consecutive complete games — while Houston accumulates zero innings from their starters — just to get within 3 innings of the Astros.

Kevin Cash’s strategy has produced results, especially in the first inning, where opponents have scored the 2nd lowest runs per game at 0.36. However, the limited use of a traditional starter is evident in the innings totals, and has caused the bullpen to rack up 335 IP, the most in baseball by a wide margin. 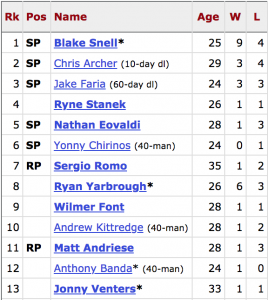 The long list of pitchers who have started a game for the Rays this season (Credit-Baseball-Reference.com)

With that, the experiment looks like it will continue for the foreseeable future. Especially with the results being so favorable.

The team stands at 36-40 (3rd place in the AL East), which is more successful than most would have predicted going into the year. It will certainly be interesting to see how the bullpen can handle the stresses of an enormous workload going forward.

The front office and manager Kevin Cash will need to continue to shuffle players back and forth, as the Rays have already used 13 different pitchers as starters, and a total of 23 arms so far this season.

With starting pitching salaries skyrocketing, and a lack of quality rotation depth for most organizations, should the success continue for the Rays, could we be looking at the next trend in Major League Baseball?