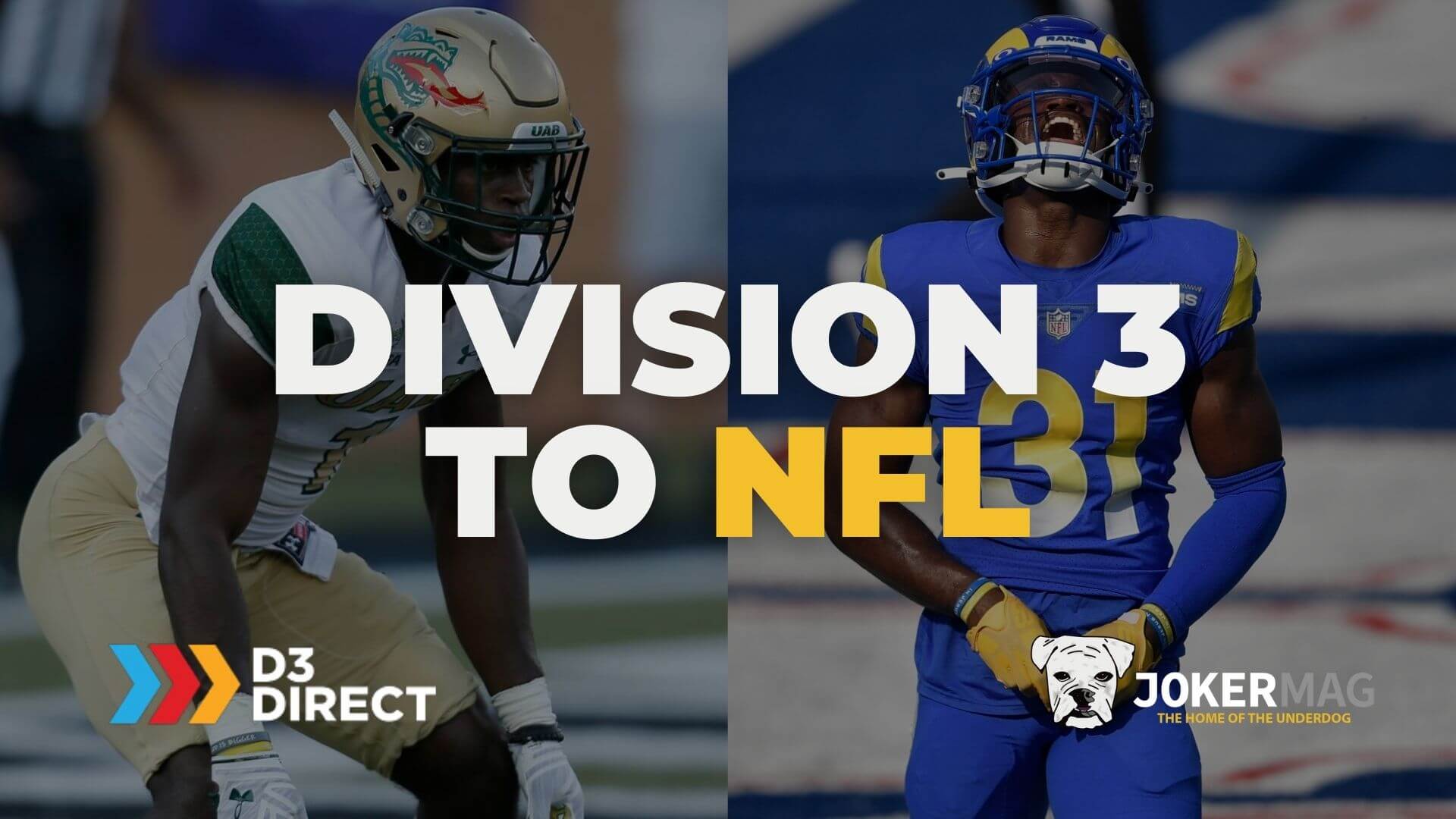 Darious Williams has a story shared by many D3 student-athletes: Under-recruited out of high school and left with something to prove.

Flash forward to the present, and Darious is now an every-week starting CB in the NFL for the LA Rams and is preparing to play in the Super Bowl.

Despite being a multi-sport athlete (basketball, track, and football) at Creekside HS in Saint Augustine, FL – Darious wasn’t ranked.

That’s right, a starting CB in the 2022 NFL Super Bowl had zero stars and zero offers coming out of HS.

So what did he do? Quit? Give up on his athletic dream?

Instead, he found his first opportunity at Marietta College – a Division 3 program in the Ohio Athletic Conference.

Most players with D1 or pro dreams might have scoffed at the Pioneers, but Darious was different – he just wanted to get on the field.

Unfortunately, his tenure in Ohio was short-lived as he ultimately returned home to Jacksonville, Florida after one season due to family issues. But it gave him a foothold in college football and a body of work (38 tackles and 5 INTs) that he could share with other coaches.

After some time away from the game Darious tried to walk on in his spring semester at UAB – a school much closer to home. After being turned away the first time, Williams made the team as a walk-on in 2014 under new head coach Bill Clark.

He earned a scholarship halfway through that season, “only to have the school administration shut down the program a few weeks after the season.”

“All of that is just a prelude to maybe the most amazing part of Williams’ journey. He came home after UAB dropped football, which the administration reinstated after much public pressure in June 2015, and worked as a floral delivery man at Ace Hardware while taking classes at Florida State College of Jacksonville.”

While the program was shut down, Williams received offers from Southern Miss, South Alabama, and Troy. Those teams liked what they saw in the cornerback’s first D1 season. Ultimately, Darious decided to stay put in Birmingham, playing junior college ball until the UAB program returned in 2017.

When the Blazers stepped back on the field, Williams was older, faster, stronger, and better than ever.  In 18 starts, he notched 73 tackles, 26 passes defensed, and 6 interceptions (two of which were pick-sixes).

By the time he declared for the NFL Draft, he’d been named first-team All-Conference USA and first-team All-American.  And yet, despite a pro day that put him among the top-10 cornerback prospects, Darious Williams went undrafted in 2018.

Picked up by the Baltimore Ravens as an undrafted free agent, Williams contributed as a special teamer before being waived after Week 4.

That’s when Coach Sean McVay and the Los Angeles Rams came calling.  As the sixth cornerback on the depth chart, Darious stuck around for the entire season – playing in one game.

Before that, Darious started in the 2022 NFC Championship game where he matched up against Deebo Samuel and other 49ers receivers, helping the Rams secure the win.

After helping the Rams secure the Lombardi Trophy with a 23-20 victory over the Bengals, Williams was a popular name in free agency rumors heading into the offseason.

But the star cornerback said he was not thinking about his contract situation, per the LATimes:

“I don’t really get into any of that stuff,” he said. “Just play ball.”

In March 2022, Darious Williams signed a $39 million contract with the Jacksonville Jaguars. Not too shabby for a D3 football alum.

Editor’s Note: We hope you enjoyed this special collaboration with D3 Direct – your go-to source for info and advice on Division 3 recruiting, admissions, and post-grad opportunities. If you’re a prospective student-athlete, parent, or coach who wants to learn more about the D3 level, join their Recruit to the Real World Substack and follow them on Twitter @D3Direct!