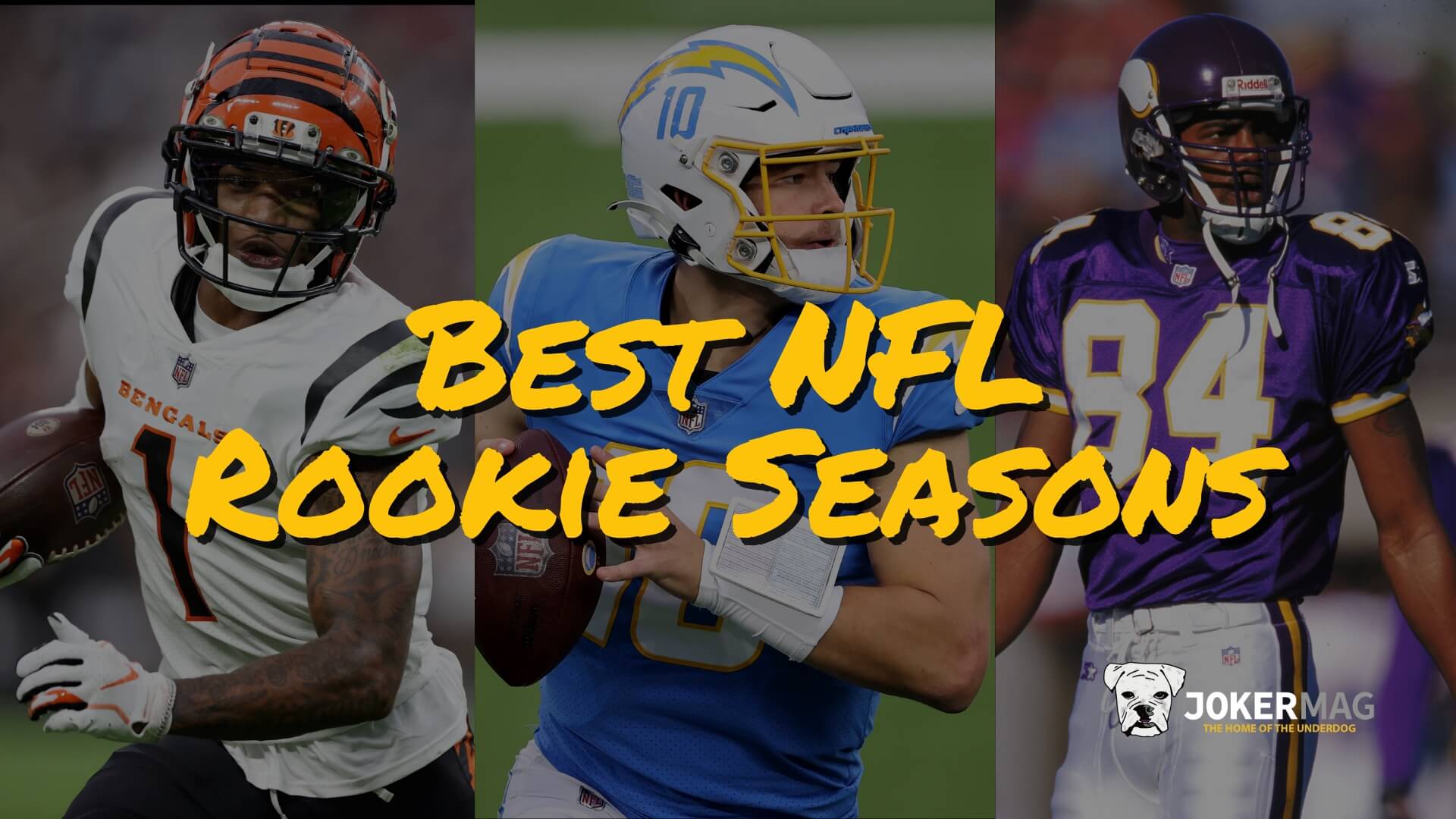 After the NFL Draft wraps up, all 32 teams have a fresh crop of drafted and undrafted rookies to put to work. Ideally, all of these rookies are able to make the final 53-man roster and get added to the team’s gameplans every week.

But the reality is, that not all rookies make the final 53-man roster. And the ones who do are not guaranteed to carve out a role for themselves in the NFL.

We’ve already detailed the best 7th-round picks in NFL history as well as the best undrafted rookies who beat the odds. But we haven’t yet looked into the best NFL rookie years – until now.

From Randy Moss’ sensational rookie season to Ben Roethlisberger’s sheer brilliance as a rookie signal-caller, there is no shortage of players who have made an impact in their first season in the league.

Here’s how we rank the best rookie seasons in NFL history.

Barry Sanders won the Heisman Trophy in his final year at Oklahoma State and was drafted 3rd overall by the Detroit Lions in 1989.

In his rookie year, Sanders started 13 games and ran for 1,470 yards and 14 touchdowns. Sanders was named Offensive Rookie of the Year and was also a First-Team All-Pro in his first season of NFL Action. At just 5’8’’, Sanders also could qualify as one of the best, and shortest, NFL players in history.

Looking at just the box score, you may be wondering why Devin Hester is on this list.

The Bears rookie played in all 16 games in 2006 but had only one target on offense. So how did he have one of the best rookie seasons in NFL history? It is simple – Hester put on an absolute clinic on one of the most overlooked aspects in football – special teams.

Hester returned three punts for touchdowns as well as two kickoffs for TDs. His ability to score points on special teams was unprecedented, and he was a major factor in the Bear’s journey to the Super Bowl in 2006.

Ja’Marr Chase was such a highly-touted collegiate prospect that he sat out an entire season and was still the fifth overall pick in the NFL Draft. He did not disappoint, putting up one of the best rookie wide receiver performances in NFL history.

His skillset opened up the playbook for the Bengals and seized the opportunity. In his rookie season, Chase caught 81 passes for 1,455 yards, an NFL record, and 13 touchdowns. Chase’s impact on the Bengals transformed one of the worst teams in the NFL into a Super Bowl contender.

Big Ben was drafted to the Steelers in 2004 after Pittsburgh went 6-10. Ben stepped in and immediately delivered for Steelers’ Nation.

He won each of his 13 starts in 2004 and he led the Steelers to a 15-1 record. Roethlisberger won Offensive Rookie of the Year honors after he threw for 2,621 yards and 17 touchdowns by completing 66.4% of his passes. The Steelers made it all the way to the AFC Championship game on the back of their rookie signal-caller.

In 1999, Jevon Kearse set the NFL rookie record with 14.5 sacks. He was affectionately nicknamed “The Freak” when he entered the league because, well, he was an absolute anomaly.

Kearse started all 16 games for the Titans in 1999 and compiled eight forced fumbles, one fumble recovery for a sack, and an astounding 14.5 sacks. He was named the 1999 Defensive Rookie of the Year, a First-Team All-Pro, and finished second in Defensive Player of the Year voting.

In 2020, Justin Herbert had the best rookie quarterback season ever. What he did after stepping in for QB Tyrod Taylor is remarkable.

Herbert broke rookie QB records for most passing touchdowns with 31 and he threw for 4,336 yards, just 11 shy of Andrew Luck’s rookie record, in just 15 games. Naturally, he won Offensive Rookie of the Year honors for his record-breaking 2020 rookie campaign.

After an illustrious collegiate career at the University of Texas, Earl Campbell was the No. 1 overall pick in the 1978 NFL Draft. Campbell, literally, rushed his way onto the NFL scene with 1,450 rushing yards in his rookie season which won him the NFL’s rushing title in 1978.

What constitutes an amazing rookie season? Is it hard to qualify which rookies are the best? Well, in Dickerson’s case, it’s pretty simple.

Dickerson finished 2nd in MVP voting, 2nd in Offensive Player of the Year voting, was a First-Team All-Pro, and of course, won Offensive Rookie of the Year honors.

When Lawrence Taylor made his NFL debut in 1981, sacks were not officially recorded as a stat. However, looking back, NFL statisticians have attributed 9.5 sacks to Taylor during his rookie season.

LT, after his tremendous rookie season, became the first player in NFL history to win both Defensive Player of the Year and Defensive Rookie of the Year honors.

Moss was the 22nd player drafted in the 1998 NFL Draft out of Marshall, a small school in West Virginia. He burst on the scene with 17 touchdown catches – an NFL rookie record – and led the Vikings to a 15-1 record.

The Minnesota wideout caught 69 passes for 1,313 yards and won Offensive Rookie of the Year honors, finished third in MVP and Offensive Player of the Year voting, and was a First-Team All-Pro. His Thanksgiving day performance against the Cowboys, when he caught three passes for 163 yards and three touchdowns, remains one of the most iconic stat lines in NFL history.