If you’re an all-around sports fan or a fan looking for a new team and city to cheer on, ‘Places to Go/Teams to See’ is a must-read series for you. The series will highlight cities and teams from across the globe in each of the major sports.

With the FIFA World Cup just a couple of weeks away, soccer fans are preparing with some MLS action. The MLS season is at its midpoint and the 2018 campaign has been an exciting one.

If you, like many others, are unable to make it to Russia for the World Cup, here are a few MLS Stadiums that you must see instead: 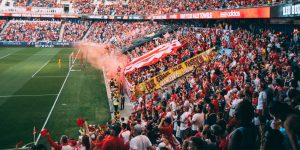 The New York Red Bulls play their home matches at Red Bull Arena in Harrison, New Jersey. The arena provides all the excitement for the area as it not only hosts the Red Bulls but the US Men’s National Team as well.

Its location is ideal for commuters from both New Jersey and New York where soccer is gaining more and more fans every year. The Red Bulls are an exciting team that is a continuous threat in the Eastern Conference to win it all.

They have arguably one of the top scorers in MLS history in Bradley Wright-Phillips. He paces the Red Bulls with a dominant attack. This season he’s getting help from midfielder Alejandro Romero Gamarra. The 23-year-old Argentina native is a dynamic playmaker, leading the team with 9 assists.

Overall, a New York Red Bulls game should be added to your summer agenda. Red Bull Arena is an ideal location just across the Hudson River from New York City and the Red Bulls always put on a show.

Admittedly, the LA Galaxy are not having a good season — at least by their standards. They currently hold the 8th seed in the Western Conference with 17 points in 14 matches played. However, with 20 matches left for the Galaxy, no one would be surprised if they made a run for the playoffs.

They are a must-see team for one reason and one reason only: Ibra. Yes, you read that correctly. Zlatan Ibrahimovic is in the MLS and plays for the LA Galaxy.

He leads the team in goals with 5 and still holds the Goal of the Year in all of soccer. Ibra is one of the most talented players in the world who’s blessed soccer fans in the United States and Canada with his play.

Head out to Los Angeles and visit the StubHub Center. You will be graced with the opportunity to watch a world-class athlete at the top of his game with some of the best fans in the entire league.

Things are going well for sports in Atlanta. The Braves are playing their best baseball in years and the Falcons, despite blowing a 28-3 lead in the Super Bowl two seasons ago, have been a juggernaut in the NFC.

With that being said, the greatest surprise for Atlanta sports fans is the dominant play of Atlanta United. The team leads the MLS with 29 points and 30 goals in its second season. They are led by forward Josef Martinez.

Martinez is an electric player that scores goals at an unbelievable pace. In 2017, he had 19 goals in just 20 appearances. This season he’s already netted Atlanta United an astonishing 12 goals in just 14 appearances.

His productivity, along with USMNT Goalkeeper Brad Guzan stopping shots, is lighting up the Mercedes-Benz Stadium on a nightly basis.

Although the US Men’s National Team didn’t make the 2018 FIFA World Cup, soccer is hot in Atlanta in the club’s second season. Atlanta United average an astounding 48,000 fans per game and there’s no slowing down in sight.

So take the trip to Atlanta and witness an incredible event among thousands of other fans!