If you’re an all-around sports fan or a fan looking for a new team and city to cheer on, ‘Places to Go/Teams to See’ is a must-read series for you. The series will highlight cities and teams from across the globe in each of the major sports.

You might even find yourself a new favorite team!

The MLB season is two months in and it has been nothing short of incredible. The Red Sox-Yankees rivalry is officially back and the NL Central is absolutely stacked.

With the brink of June on the horizon, here are the must-see ballparks for this summer. 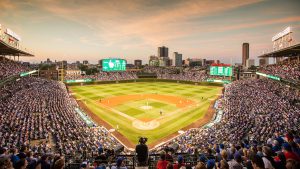 Fly the W. That’s what you will see and hear all over Wrigley Field. While Wrigley Field may not have the greatest, state-of-the-art facilities, the atmosphere is impeccable.

Where modern stadiums are more focused on the big board and entertainment, Wrigley is all about the breathtaking game of baseball. Cubs fans are tuned in the entire time, most holding scorecards, and following every pitch of the game.

The Cubs are also an exciting team to watch. They won their first World Series in over 100 years in 2016 and lost in the NLCS in the fall of last year. With young stars such as Kris Bryant, Willson Contreras, and Javier Báez, the Cubs will continue to be a special team and a source of happiness for their fans.

After watching Anthony Rizzo go deep, or Javier Báez make an electric play, don’t forget to enjoy all that Chicago has to offer. In addition to baseball, Chicago is famous for its deep dish pizza and wide array of interesting museums.

Boston, in general, is a thrilling sports city. Fenway Park, however, is its focal point. The city surrounding the ballpark is always buzzing before and after games.

Fenway Park is most iconic for the famous Green Monster in left field. If you ever have the chance to get tickets for the Monster, do not hesitate. There is no better view in all of sports.

Before you head into the ballpark, there are two places that you must visit: The Dugout and Yawkey Way. The Dugout is a rooftop bar located on the street behind right field and there is a great view of the stadium. It is a must-stop destination for sports fans.

Yawkey Way, on the other hand, is an evident hangout spot at Fenway Park. It is ultimately a small street attached to the stadium and it is filled with food and drinks as well as Red Sox history.

Fenway has it all. There’s not a single flaw with the ballpark or the surrounding areas and the Red Sox are not too shabby either. 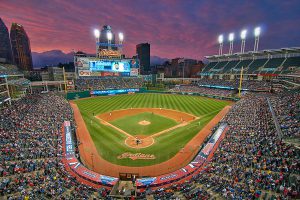 The Cleveland Indians have been known as the ‘WINdians’ for the last few seasons after a rough patch in the early 2000s. This resurgence in the AL Central has turned Progressive Field into an excellent ballpark to visit.

Our fellow writer visited Progressive Field in the summer of 2017 and was blown away by the Cleveland fans’ immense amount of knowledge and passion for the game. The stadium is viewer-friendly and even the standing room section is a great place to watch the Indians play.

What a play by Lindor!! This game is unbelievable!! pic.twitter.com/4E8MiQ5TgZ

It’s a treasure to watch Francisco Lindor play a flawless shortstop, José Ramírez chase a batting title, and Andrew Miller shut teams down from the left side.

Outside of the ballpark, the city of Cleveland has a collection of fun sports bars and a lively nightlife. Cleveland should definitely be on your radar if you are looking to not only watch baseball, but enjoy yourself in a new city.

Black and yellow — the only colors you’ll see once you enter the city of Pittsburgh. Outsiders often view Pittsburgh as muggy and groggy, but the city might be one of the best sites in the US. PNC Park adds to this beauty.

PNC Park has a jaw-dropping landscape. From any seat facing the outfield, you can see the city of Pittsburgh in the background. The Roberto Clemente Bridge hangs behind centerfield in front of the city’s skyscrapers and there’s not a better picture for your camera to capture.

Andrew McCutchen may no longer be roaming centerfield, but the Pirates are surprising many in arguably the toughest division in baseball. All-Star Corey Dickerson and “El Coffee” Gregory Polanco are a treat to watch. They are as gritty as the city of Pittsburgh and are not backing down from the stout play of the Cardinals, Cubs, and Brewers.

So head out to Pittsburgh and tailgate with some of the best fans in sports, who swarm the surrounding streets of PNC Park hours before games to drink, eat, and talk Pirates baseball. PNC Park has a surplus of excitement to offer as a baseball fan and sports fan, in general.

The Baltimore Orioles are not exactly a fun team to watch at the moment, but Camden Yards will always be an attraction for baseball fans. Located in the heart of Baltimore, the stadium is located adjacent to the Inner Harbor.

The harbor is a family-friendly hotspot. There are restaurants with views of the water and the Baltimore Aquarium, the largest tourist attraction in the state of Maryland.

For young adults and college students, Pickles Pub is the place to be before and after Oriole’s games. The place is flooded with people and is the perfect spot for food and drinks before spending more money than you should in the stadium.

Then there’s Eutaw Street, which is actually within the stadium. Sandwiched between the right field stands and the famous warehouse, shops and concession stands line the alleyway.

As of now, the Orioles are dead last in the AL East. However, Camden Yards will always be a summer destination because of the landscape and the atmosphere surrounding the stadium.

Head on out to Baltimore this summer before Manny Machado gets traded and enjoy the Inner Harbor while drinking Maryland’s famous National Bohemian Beer!

What’s been your best sports city experience? Comment below.