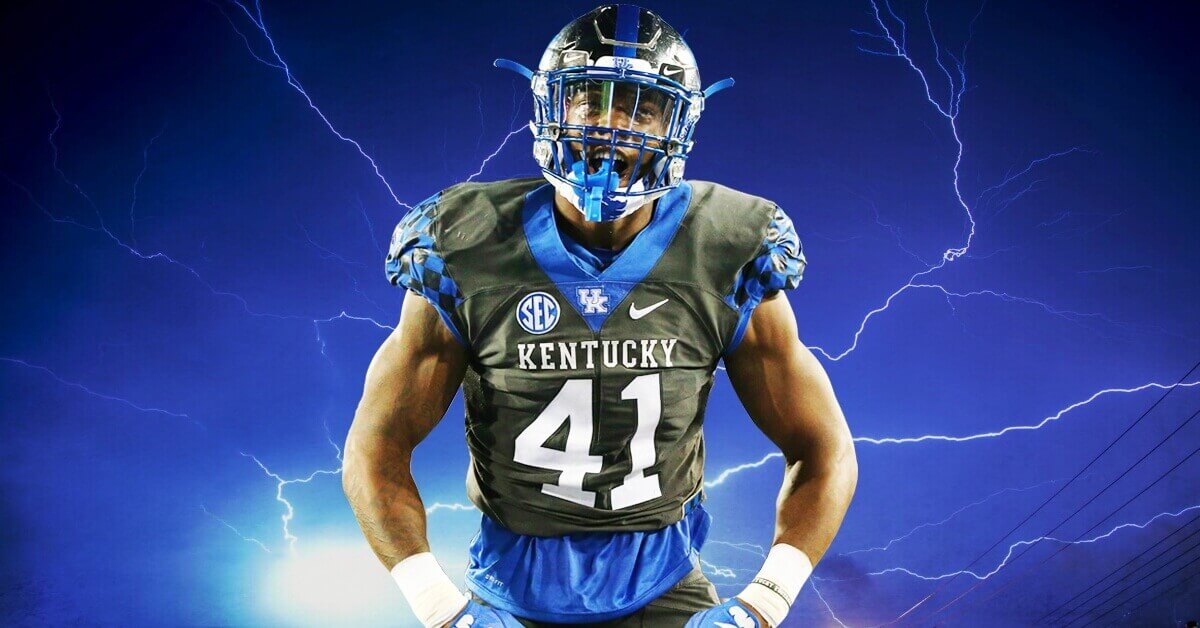 With the season inching closer, fans around the country are patiently waiting to see who their team will pick in the upcoming NFL Draft. One name making the rounds is University of Kentucky outside linebacker Josh Allen, a former 2-star recruit from Cumberland County, Virginia.

Josh Allen’s old high school coach, John Fiore from Montclair High School (Montclair, New Jersey) has been a believer in his potential to become a top NFL pick since his commitment to Kentucky, saying, “To be honest with you, it doesn’t shock me at all.”

While Allen is now a consensus top-10 pick in this year’s draft, getting to that point was not easy.

Allen’s career began at a small high school in Alabama where he played wide receiver and linebacker before moving to New Jersey prior to his senior year of high school. He credits his “dog mentality” for helping him overcome triple-teams on defense.

After his move to New Jersey, Allen went on to lead New Jersey in sacks. Initially, he was committed to Monmouth University, a FCS school in the shore area of New Jersey.

But then a friend of Mark Stoops urged the Kentucky head coach to take a look at the underrated pass rusher.

Allen didn’t draw many eyes on the national recruiting stage, as he barely cracked the top-100 at his position. In fact, he barely even cracked the rankings as a top-50 recruit in all of New Jersey.

Officially, he was the 2,121th ranked recruit in the nation!

As a 2-star recruit, Josh Allen was seen as no more than a dart throw in the 2015 recruiting class. College scouts saw him as someone who could possibly become a reliable backup by the time his senior year rolled around.

Well, we all know what happened next.

Allen transformed himself into a 6’5″ 260-pound beast. And, after playing just three games his freshman year, he recorded a combined 14 sacks over his next two seasons.

After an outstanding junior season, many in Allen’s circle pushed him to enter the NFL Draft. His girlfriend had just given birth to their first son and Josh Allen was expected to be a top-round pick.

Now it was time to make the most important decision of his life.

While no one would’ve questioned his choice to leave school for the NFL, where he’d instantly secure millions for his new family, he chose to return for his senior season, a choice met with much criticism.

A major factor in him returning to school was time. Instead of traveling all over the country for different camps and events to prepare for the draft, he’d get to spend that time with his newborn son and fiancé.

And that decision paid off greatly.

In his senior season, Josh Allen went on to sack the quarterback 17 times. That’s more than his previous two seasons combined!

He shattered the Kentucky single season and career sacks record, earning the National Defensive Player of the Year award. To win the award in a conference dominated by Alabama, Georgia, LSU, and Florida is a huge deal.

Trying to focus on Drew Lock against Kentucky but Josh Allen dominated with a couple strip sacks. Great inside moves, but also enough speed to win around the edge. Can see why such hype around him pic.twitter.com/Yu38cMJHJG

Throughout his tenure at Kentucky, Allen gained close to 40 pounds, making him almost impossible to block. During the NFL Combine, Allen ran a 4.68 40-yard dash. His combination of size and speed is extremely rare in an NFL prospect.

Josh Allen bet on himself and, come draft night, it will pay off greatly.

In a matter of five years, Allen went from a 2-star recruit to an all but likely top-10 pick. Many so-called draft experts are projecting the New York Jets to draft Allen third overall, which would add to their already stellar defensive additions this offseason.

Good luck to those offensive linemen going up against Josh Allen next season, you’re going to need it.