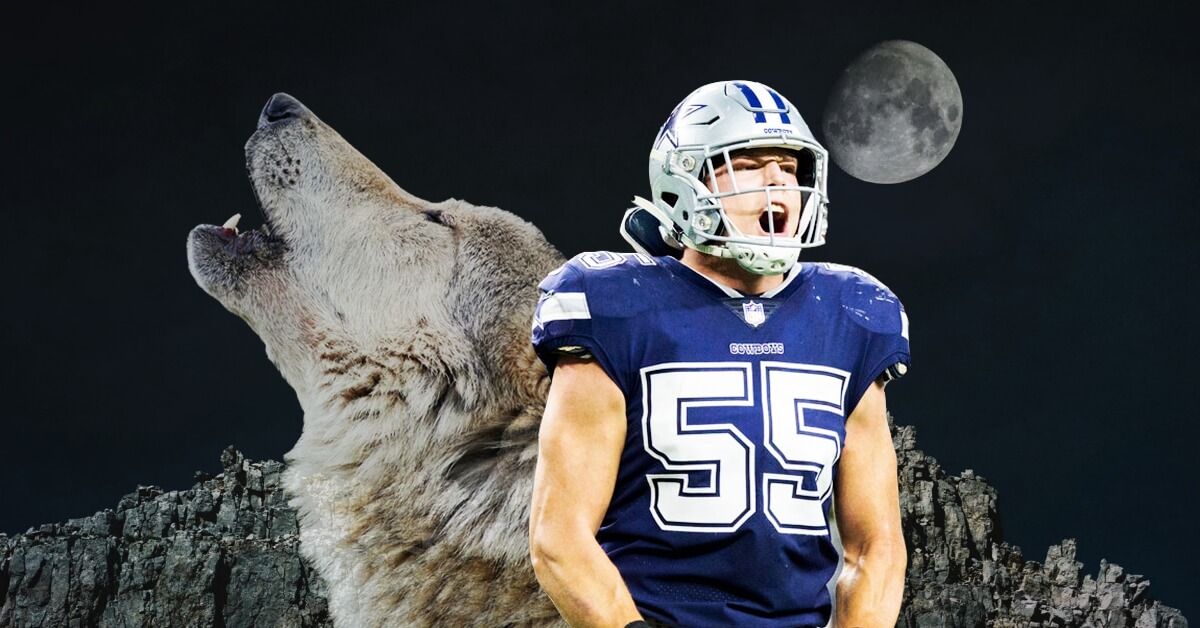 Underdogs come in all shapes and sizes. This one happens to be massive. He goes by the name of Leighton Vander Esch and he’s a starting linebacker for the NFC East Champion Dallas Cowboys.

Vander Esch exploded onto the scene this year in his first NFL season. In the shadows of veteran LB Sean Lee, it seemed as though Vander Esch’s snap count would be limited for his rookie season.

But that’s not been the case.

Lee went down with in an injury in Week 3, immediately forcing Vander Esch into an expanded role. And the rookie LB did not disappoint, recording 8 solo tackles and assisting on 2 others in a loss to the Seahawks.

Cowboys fans felt the rookie’s presence and were elated to realize that their first-round draft pick might end up panning out after all.

How He Got There

Unless you’re a Mountain West Conference football fan, you likely never heard of Leighton Vander Esch until the Dallas Cowboys selected him with the 19th overall pick in the 2018 NFL Draft.

As the commissioner announced the selection, the crowd erupted in a share of mindless cheers. ESPN’s draft show hosts couldn’t keep their shock to themselves.

“Wow. This is interesting.”

Barely anyone knew who this kid was. Many called it a reach. And it’s hard to blame them.

Vander Esch is not your typical first-round draft pick. He did not attend a power-five university. In fact, he was barely recruited out of high school.

And that may have stemmed from the type of football Vander Esch played in Idaho.

“What do you mean, the type of football?” some might ask.

For this reason, his high school’s conference competed in 8-on-8 football instead of the standard 11-on-11, forcing all players to play on both sides of the ball.

“[Eight-man football] teaches you to be a well-rounded player,” Vander Esch told NFL.com. “…It teaches you to really learn the aspects of all the positions and be able to play everywhere.”

Vander Esch was both the starting QB and MLB for his 8-man football team and led his high school to a State Championship in his senior year while earning the award for All-Idaho 1A Division II Player of the Year.

Because his school was so small and insignificant to college recruiters, Leighton Vander Esch needed to try walking on at Boise State. And he did so successfully.

After redshirting his first year, he cracked the second linebacker unit in his second year, and then injured his neck after just 6 games in his third year.

Not exactly a recipe for success for an NFL dream chaser.

But Vander Esch wasn’t going to let anything stop him. In 2017, in his fourth year at Boise State, he earned himself a starting spot at linebacker for the Broncos and did not disappoint. He played well enough to be named Mountain West Defensive Player of the Year.

Quite an accomplishment for a player’s first year as a full-time starter.

After a stellar junior season, Vander Esch had a tough decision to make. He still had one year of eligibility left at Boise State. From the outside looking in, it’s easy to sit there and comment on a kid’s life decision.

“He should enter the draft” or “he should stay and get his degree” always ends up being the argument.

Now, if he felt that he needed to stay at school for another year, I truly believe he would have. But Vander Esch didn’t feel that. He believed he had what it took to make it big time.

After making the announcement, Vander Esch told the Idaho Press-Tribune, “[I have] complete and total confidence in myself because I love competing and going out there and proving people wrong.”

Leighton Vander Esch opted to forgo his senior season and enter the 2018 NFL Draft. He attended the NFL Scouting Combine, where he thoroughly impressed several scouts. By the conclusion of the pre-draft process, Vander Esch ranked in the top-5 at linebacker across a spectrum of scouts and teams.

At that point, he knew he made the right decision. But the process wasn’t over.

On the night of April 26, 2018, the Dallas Cowboys selected Leighton Vander Esch with the 19th overall pick. The selection was met with heavy criticism on the national stage.

But for Vander Esch, it was time to silence the haters.

Slamming the Door on the Doubters

Vander Esch did just that. And rather quickly, I’d say. The now Dallas Cowboy made a name for himself across the league when he stepped in for Sean Lee.

But it wasn’t until the Week 10 tilt against the divisional foe Philadelphia Eagles that the rookie LB won over the hearts of Dallas fans across the country.

13 solo tackles. A tackle for a loss. An interception. One Cowboys victory. And Defensive Player of the Week.

It couldn’t get much better than that for Leighton Vander Esch. The buzz around the league was evident and The Wolf Hunter was risen. He parlayed that DPOW into a Defensive Rookie of the Month award for November.

While he didn’t crack the Pro Bowl roster, Leighton Vander Esch made a statement this year.

The rookie LB’s stellar play is a big reason why the Cowboys are heading to Los Angeles this weekend to take on the Rams in the Divisional Round of the playoffs.

It’s time that NFL pundits and fans alike put some respect on The Wolf Hunter’s name.