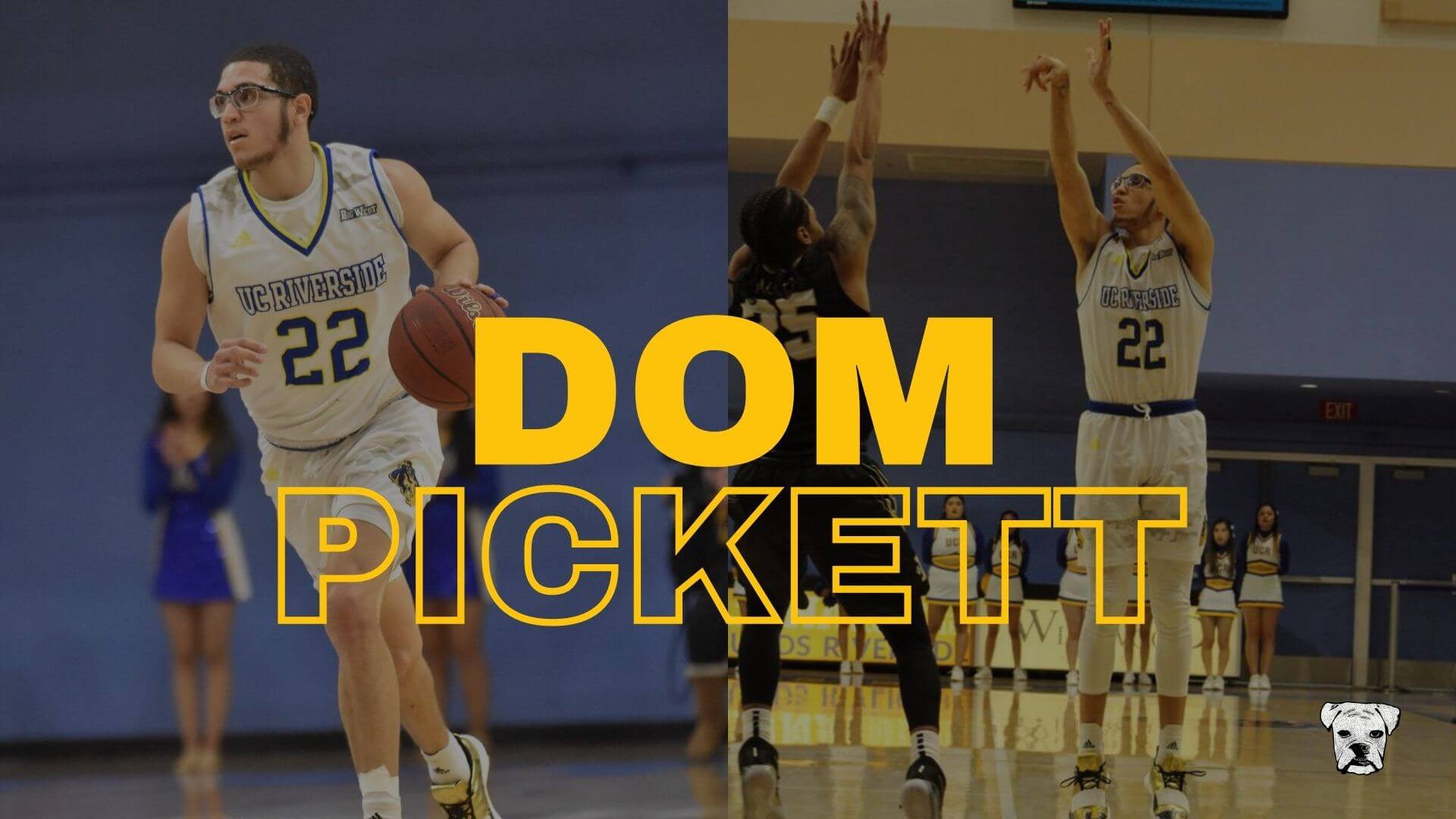 In the coaches’ office on the campus of the University of California, Riverside, Dominick Pickett listens attentively.

On the court, Pickett began as the Highlanders’ basketball team manager. But when games and practice weren’t in session, he made the most of his time. Although serving as team manager was only one stop on his hoops journey, it was certainly not one he took for granted.

“I took this role head-on and made the most out of the opportunity,” recalls Pickett. “Throughout that year I just continued to work on my game and study day in and day out until the opportunity presented itself and I was ready.”

Southern California has long been noted for its long list of basketball talent. But lost in the hoopla of the bright lights of LA, the magic of Anaheim, and beaches of San Diego is the Inland Empire.

Sitting just east of the state’s entertainment capital, this region of SoCal often seems to get overlooked in all aspects. But make no mistake about it – Pickett, who grew up in Moreno Valley, played against some of the region’s top players during his high school years.

“There were a lot of big-name prospects playing during that time,” says Pickett. “I remember competing against them either on the AAU circuit or during the high school season.”

“There are a lot of great schools around the area with a lot of high collegiate talent year in and year out.”

Against the state’s best, Pickett soared. As a senior at Rancho Verde High School, he led his team to an appearance in the CIF Southern Section, Division 1AA Tournament. Many of his teammates and opponents were NCAA Division I hopefuls as well, which gave Pickett an enhanced level of confidence to succeed in college.

Yet he still knew he’d have to set himself apart from the pack in order to really excel at the next level.

“I wasn’t the most athletic and I wasn’t freakishly tall,” he recalls about his senior year of high school.

“I understood that in order to get that same opportunity and reach my goal of playing Division I, I needed to do something else and bring something unique to the table.”

He wouldn’t have to travel too far to make his mark on the NCAA.

Home Is Where The Heart Is

Committing to college meant more than basketball to Pickett. It meant family. And family to him is everything.

“Being able to stay close to home and be able to have all my family, close friends, and my younger siblings be able to come out to the games and watch really made me feel comfortable out on the court.”

Away from the hardwood, Pickett knew he also had the opportunity to attend one of California’s most prestigious universities. His mom valued education, understanding how important it was to set up a plan for after basketball.

So all of this considered, it was an easy decision to enroll at UC Riverside, where he is currently a graduate student pursuing his MBA.

Pickett was just entering the university as most other students do, looking to balance academics, social life, and the new journey of college life.

Yet his goal of playing Division I basketball never wavered. After arriving at Riverside, he spoke with then-assistant coach Justin Bell. Pickett was told that although the roster was full, there was an opportunity for him to be a team manager.

With an opportunity in hand and a meaningful connection made within the program, Pickett got the chance he needed. And he didn’t take the opportunity for granted.

“The regular manager duties [included] making sure practice was set up and cleaned up, rebounding for players, getting film together, and making sure food is in order.”

“But on top of [these duties], I would always be in the coaches’ offices, dissecting their brains about the college game, and seeing how I could impact the team in any way.”

After a full season in this role, Pickett truly gained an appreciation for being around the program.

His newfound perspective would go a long way in shaping his next several years in Riverside.

Taking a Leap of Faith

When faced with one of the biggest risks of his basketball career, Pickett bet on himself.

He wanted to prove to the doubters, to those who said “I told you so” that his dreams were more than just dreams.

Outside all the noise though were those who had his back since Day 1.

“What inspired me most to walk on was my support system – my family, friends, trainers, ex-coaches, and the UCR team at the time,” says Pickett. “They all knew what I could bring to the table and knew with the opportunity that I could make something happen.”

Pickett made his first appearance for the Highlanders during the 2017-18 season. Despite initial nerves, having his family in the stands for the game made him feel more at ease. Soon enough, Pickett had settled in and was able to just enjoy the game and play basketball.

The redshirt freshman knew how far he had come to achieve this goal. In one sense, he had finally made it. But on the other hand, he knew he had a ways to go to be the best player he could be.

“[Basketball] is much bigger than just me,” says Pickett. “I understood that now that I am here I can not be content because the odds were still stacked against me. I had to continue to improve and beat [those] odds.”

Since Pickett’s freshman season, he’s increased his minutes per game and points per game averages in each subsequent season.

Once Pickett earned a spot on the Riverside roster, that just meant a new beginning in his ongoing basketball journey.

Now it was time to focus on his body, improve his nutrition, and work on the basketball skills that would enable him to maximize his potential.

“I took my [fitness and nutrition] goals to our strength and conditioning coach, who set me up with a meal plan and a workout plan that included extra conditioning,” says Pickett.

By the start of the following season, Pickett had noticeably improved physically – allowing him to play more minutes, defend better, and be quicker running up and down the court.

His body fat percentage decreased from the 13-14 percent range to just 9 percent.

Yet Pickett knew this would only get him so far. With most players on the roster already in pristine shape and adept at shooting the ball, Pickett needed to establish a unique role amongst his teammates.

He started to focus on the intangibles of the sport, which revolve around the common denominator of hard work. Oftentimes, these aren’t results that will appear in a boxscore. Pickett calls them “the little things.”

At the end of the 2020-21 season, Pickett was named the Big West Conference’s Best Hustle Player.

“My focus was, and continues to be, on rebounding, not turning the ball over, hitting open shots, being a leader, taking charges, playing defense, and using my high [basketball] IQ,” he says.

Among these attributes, leadership is one that has perhaps most benefited the team. It’s a role Pickett was shy to step into at first, but he’s fully embraced being the “on-court” coach ever since.

It’s one of the many ways in which the coaching staff has counted on Pickett to step up throughout his collegiate career.

For someone who entered college as an undersized, far from vocal student, his leap has been remarkable. Next year, he plans to use his last season of eligibility while he completes his master’s program. Even after leaving campus, Pickett aims to continue building on what he’s learned in Riverside, whether or not that’s on the basketball court.

“If the opportunity presents itself, I would love to play professionally,” he says on his future plans. “If not, I am fully prepared to use my degree and knowledge to take me to other avenues, whether that be coaching or getting involved in business.”

In Pickett’s first season with the Highlander program, the team posted a .276 win percentage, with Pickett on the sidelines as team manager.

Four seasons later, and the team has improved their win percentage each subsequent season. This year, the Highlanders advanced to the semifinals of the Big West Tournament for the first time since 2011 and posted their highest winning percentage since their ascent to Division I play.

As the tournament’s #3 seed, it marked the program’s highest ever rank in Big West Tournament history.

Ever since joining the Big West Conference in 2001, the program has been one of the nation’s most consistent underdogs. In fact, they’ve only posted three winning seasons in those twenty years.

But now, times are changing for the better in Riverside.

In the 2019-20 season opener, Pickett scored 10 points as UC Riverside dominated the Big Ten’s Nebraska Cornhuskers on the road.

Pickett knows a thing or two about playing the underdog role. It’s one he’s developed a true connection to.

“The underdog mentality to me means everything,” he says. “It means having that hunger or determination to beat whatever odds are stacked against you at that given moment.”

Quote of the Day

The journey from team manager to Division 1 starter is not common. Pickett understands that. He knows the road that led him to UC Riverside is far different from others – but he wants to end the stigma around “being different.”

“Understand that everyone’s story or journey is going to be different and that is okay – that’s what makes you unique,” he says.

“Embrace your story and journey and use your experiences and situations as a catapult, not as an excuse.”

Pickett’s own life experiences have taught him countless lessons that have aided him both in basketball and beyond. But sometimes, inspiration from others can be a significant source of motivation too.

The words of Nipsey Hussle and Kobe Bryant have made a profound impact on Pickett.

Their messages align with the adversity Pickett has been through, and the courage he has gathered to overcome any and all obstacles.

“The best thing you can do for a person is to inspire them. That’s the best currency you can offer; inspiration. So, when a person can rely on you for that, that empowers them in every realm of their life.” – Nipsey Hussle