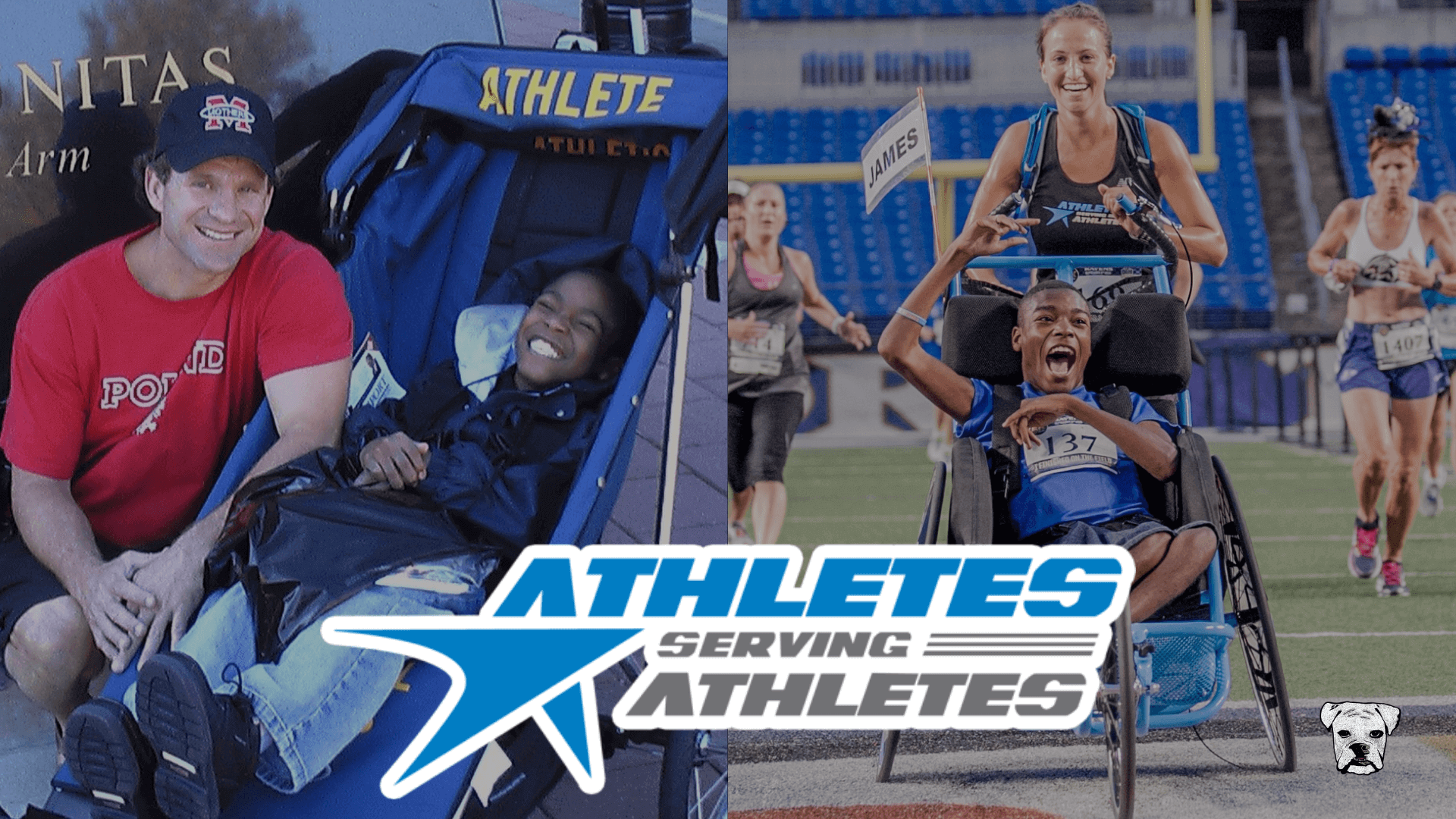 David Slomkowski created Athletes Serving Athletes with the goal of making a difference in the Baltimore community.

Over a dozen years later, the number of lives he has positively impacted is more than you could count. His organization’s impact goes beyond Maryland and extends well beyond sports.

During the COVID-19 pandemic, Athletes Serving Athletes (ASA) organized a fundraiser to raise funds for its mission:

“To elevate the quality of life for individuals with limited to no mobility by empowering them to train and participate in mainstream running events.”

With fundraising and in-person races at a minimum, the ASA team needed a way to pay for various program bills. Slomkowski, the founder of ASA, made a pledge. He would run one mile for every one thousand dollars raised.

“In one day, David Slomkowski started out at mile zero on the NCR trail [in Baltimore] and did forty miles in one day to keep that promise,” recalls Jack Gibbons, a Baltimore-based sportswriter and a longtime volunteer with ASA.

“While pushing another jogger, David would also stop every mile to do a set of curls with a pair of dumbbells that he brought along with him.”

$40,000 later, Slomkowski committed to his goal. With an ASA athlete by his side, the duo set forth to carry out the motto that has held ASA together since its beginning.

Inspiration from the Hoyt Family

Slomkowski was first inspired by Jimmy V award winners Dick & Rick Hoyt, a father and son duo who competed in many marathons and Ironman races together.

During each race, Dick would run while pushing his son Rick in a wheelchair. Although Rick has lived with cerebral palsy, it never stopped him from being his best when it came to sports.

An athlete himself in college, Slomkowski was instantly inspired by these two men.

“I was crying on my couch [when I first read their story],” says Slomkowski. “Who is doing that in the Baltimore area? I would like to be a part of that.”

“I need that inspiration.”

Soon enough, Slomkowski acted on his words. He connected with the Baer School, a Baltimore-area school that serves students up to 21 years of age on the disability spectrum.

One connection led to another. Eventually, hundreds of athletes with disabilities were competing in local races. By their side were up to 500 volunteers, called wingmen and wingwomen.

These wingmen and wingwoman are tasked with jogging or running an entire race while pushing an athlete beside them. Physically demanding, the conclusion of each race provides an immense sense of joy for all involved.

“It’s a great feeling to know that not only are you cheering for your team, but other people are cheering you on,” says Barrett Ozga, an ASA wingman who hails from Baltimore County. “It’s a feeling of accomplishment.”

“While running together with the athlete on your team, you feel that connection throughout the whole time, which reinforces [the motto] of ‘together we finish.’”

Training For A Greater Purpose

When Slomkowski started Athletes Serving Athletes, he wanted to not only serve as its Executive Director – he wanted to be an active runner too.

“It culminated with me and my good friend James doing an Ironman race in Boulder, Colorado,” says Slomkowski.

With the organization growing at a rapid pace, Slomkowski realized that this model was not sustainable. Rather, he decided to pour his effort into ASA as a whole, so that each athlete could receive the individual attention they deserved.

Today, the majority of races are 5Ks, far from the 26 plus miles that a marathon entails. But what lacks in distance is made up for in collective dedication and heart by the participants.

While each athlete trains on average 18 times a year, ASA holds over 200 training events per year. Each run brings its own share of challenges, but what remains most consistent are the strong bonds formed between athletes, volunteers, and community members.

“There is an athlete in Baltimore County, whose name is Megan. She has the sweetest spirit and is always smiling,” says Gibbons. “She says hello to everybody on the NCR trail in north Baltimore County.”

“When you’re pushing her in a jogger, everybody responds to her. It’s the neatest feeling because she makes others feel good, and by extension, she makes you feel good that you’re a part of this.”

To this day, many of the athletes, wingmen, and wingwomen remain close to one another. Ozga recalls one of his favorite memories from his time with ASA, a Halloween event in which he ran with James.

“It was a great time and reinforced the ASA values,” recalls Ozga. “We had a lot of fun with that. That’s something I’ll always remember.”

Yes, there are the values of hard work and persistence on the track, on the hill, or on the road. But ASA really makes its mark by enforcing ideas of teamwork, never leaving a fellow runner behind.

The saying “together we finish” is not just a series of words that come and go. For ASA, it is a sincere mission that’s carried out daily.

Since the inception of ASA, James has participated in numerous races with various program volunteers.

But his involvement with the organization had to start somewhere. It all began alongside Slomkowski, during a run in Baltimore to remember those lost in the 9/11 attacks.

Someone suggested that the pair start at the beginning of the pack. They navigated toward the starting line, in front of hundreds of other athletes. Within the crowd were Olympic athletes who competed in these races as their profession.

“If it weren’t for racing with James, I’m the back of the pack somewhere – another average Joe,” says Slomkowski.

“James made me feel special. At the core, some of our most basic needs are to feel loved, significant, and accepted. Our program gives you those [three] elements.”

Energetic crowds surrounding athletes running down the streets of Baltimore City are not the only times the program delivers its impact. In fact, races only account for around 6 of a total of 27 interactions that each athlete will have per year.

The majority of those are training sessions, but special events in the Baltimore community allow for athletes and volunteers to truly develop a connection with each other.

Because it’s not about the time the racers take to reach the finish line. It’s about getting there with their team.

In Slomkowski’s home office, a photo of Vince Lombardi adorns his wall. The legendary football coach is not the main focus of this frame though.

Just above the image of Lombardi is a quote from Bob Dorfman, a sports marketer from San Francisco.

Slomkowski has long been a fan of the television show American Idol, showcasing underdog singers looking to make their name in the entertainment industry.

With Athletes Serving Athletes, Slomkowski has created an organization entirely focused on the underdog as well.

As athletes with physical disabilities, many may have been told – or even thought themselves – that they will have no chance to compete in athletic events. That a mile-long race is out of the realm of possibility.

But when a group of ASA athletes and volunteers get together, everyone feels like they are part of the same mission.

“Athletes Serving Athletes has given us a purpose to run,” says Gibbons. “You’re part of a team.”