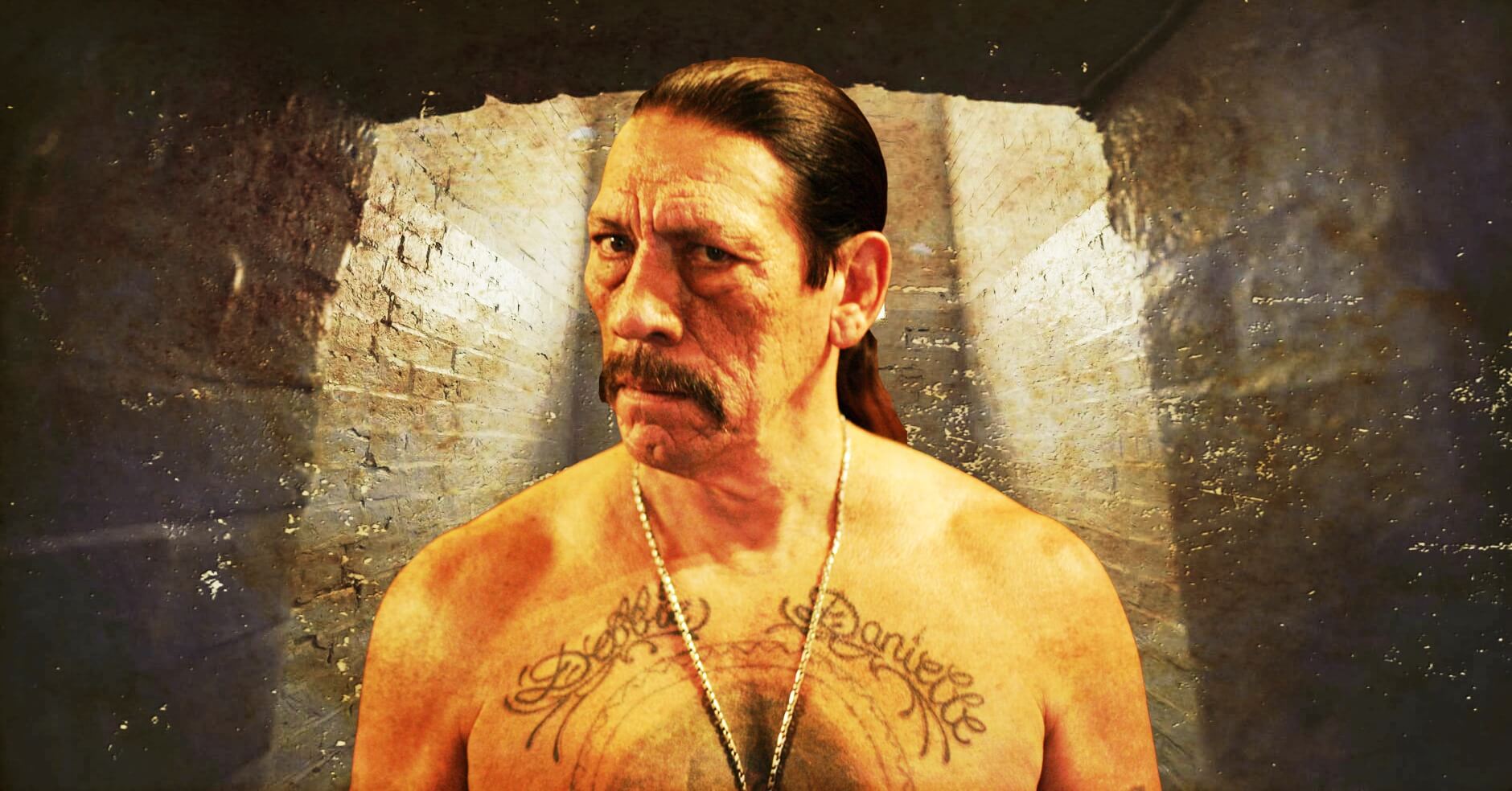 Growing up, Danny Trejo looked up to his uncle Gilbert. As his dad’s youngest brother, Gilbert was like an older brother to Danny.

“He was only like 6 years older than me,” Trejo told Mario Lopez in 2014.  “He always impressed me.  Always had a lot of money…I just gravitated towards him.”

His uncle taught him how to box.  But he also got him into drugs at an early age.  Trejo started smoking pot when he was just 8-years-old.

Then, at the age of 12, he caught his uncle shooting heroin.

From that point on, he joined his uncle in committing a series of armed robberies to feed their drug habit.  Throughout his youth, Trejo spent time in almost every juvenile detention center in the state of California.

When he was 18, after his release from juvie, he immediately got himself in more trouble.  A disagreement at a drive-in movie theater ended with him stabbing a sailor with a broken beer bottle.  He went to jail – a real, adult one this time – for two years.

A few months after his release for the stabbing, Trejo went back to dealing drugs.  This time, he got into another sticky situation, selling four ounces of fake heroin to an undercover federal agent.

He ended up in San Quentin State Prison.

It was there that his uncle’s boxing lessons came in handy.  Trejo became the light and welterweight champion in just about every penitentiary he was in.

Despite his boxing prowess, Trejo couldn’t keep himself out of trouble.  Everything came to a head when he hit a guard with a rock during a prison riot.  To this day, he says he was aiming for someone else.

But still, it left the guard seriously injured and landed Trejo in San Quentin’s solitary confinement.

Isolated from the outside world (and the other inmates), he’d try to ease his mind by acting out his favorite movie scenes.  But nothing could distract him from reality.

He was facing not one, not two, but three gas-chamber-worthy offenses.  And with a rap sheet longer than a CVS receipt, Trejo was convinced he’d be put on Death Row.

So he began saying this prayer: “God, if you’re there, everything will be alright.  If you’re not, I’m screwed.”

That was the time Danny Trejo credits to turning his life around.  “I was in the depths of hell, and because I said that prayer, my life changed.”

His prayers were answered when the charges got dropped on a technicality.  There were no witnesses.

“Three thousand inmates and they had no witnesses,” Trejo recounted.

With a new lease on life, he decided to make an effort to turn things around.  Thinking back on his crimes, drugs and alcohol were always the common denominators.

Released on parole in 1969, at the age of 25, he joined Alcoholics Anonymous and Narcotics Anonymous.  Then his sponsor got him into a program called RIF – Recover, Independence, and Freedom – working with teenage drug addicts.

“I had dedicated my life to helping other people,” Trejo said in an interview with AARP The Magazine.

For the next 15 years, he struggled to make ends meet.  Aside from counseling, he picked up work as a landscaper and even fought in a few unsanctioned backyard boxing matches.

One of his clients, an 18-year-old trying to kick a cocaine habit, called him.  His co-workers were using a lot of drugs at his job, and he worried about relapsing.

“I went down to support him,” Trejo said in an interview.  “I thought he worked at a warehouse but he didn’t.  He was a production assistant on a film called Runaway Train.”

When he walked onto the set, Trejo’s distinct look drew attention immediately.  Then, one of the producers asked if he wanted to appear as an extra in a prison scene.

When he took off his shirt, revealing his now-famous chest tattoo, the screenwriter, Edward Bunker, recognized him instantly.  Bunker also served time in jail and remembered Trejo as a boxing champion at San Quentin State Prison.

“It was like divine intervention,” he told NPR.  “For me to meet Eddie Bunker on a movie set, it was amazing.”

By sheer coincidence, the filmmakers were looking for a boxing tutor to help the movie’s lead, Eric Roberts.

Then, the director of the film, Andrey Konchalovskiy, was so compelled by their sparring behind the scenes that he offered Trejo an on-screen role as the big bad guy.

So he fought his way into the industry.  But the work didn’t stop there.  He continued to grind away, taking every small part he could to make a name for himself.

Today, he has over 350 film and TV credits, and is one of Hollywood’s most recognizable action stars.  He’s versatile too — appearing in everything from Muppets Most Wanted and Modern Family to Breaking Bad and The Devil’s Rejects.

In the end, Danny Trejo made a conscious decision to change his life for the better.  It took some time, but he ultimately learned from his mistakes.

He makes an effort to appear in four or five student films per year, helping kickstart the careers of budding directors.  He also speaks at high schools across the nation, making sure the next generation doesn’t have to learn the hard way.

“Everything good that has happened to me,” Trejo says, “has happened as a direct result of helping someone else.”