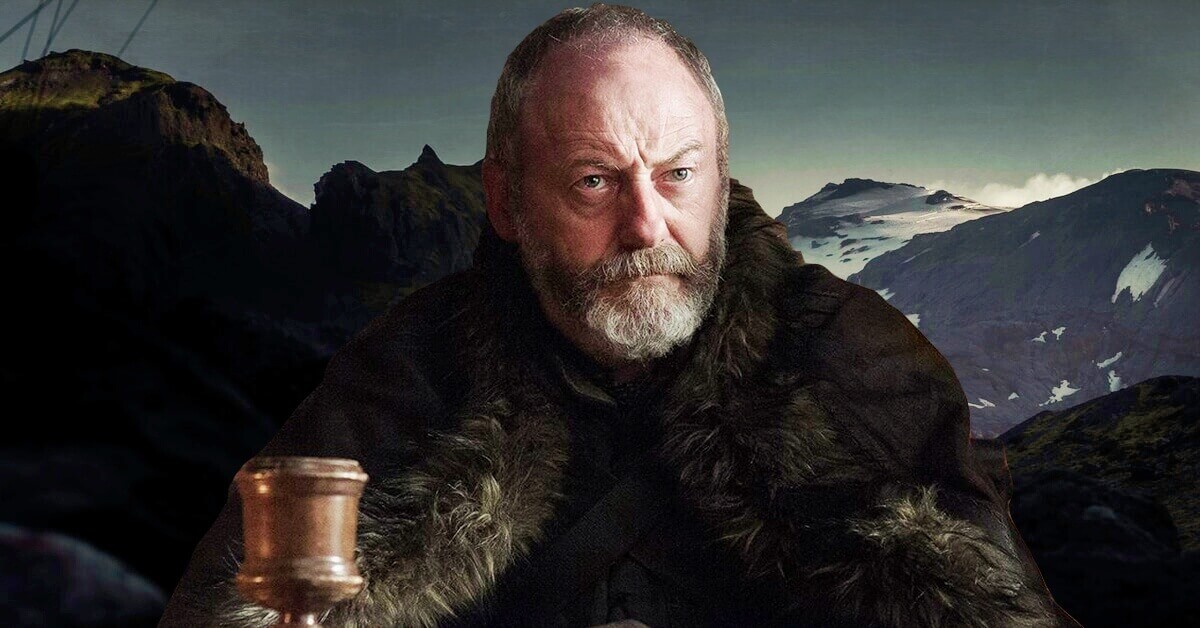 Ser Davos Seaworth is a universally beloved character on Game of Thrones. The Onion Knight’s story is an unlikely one — a journey from sneaky smuggler to good-guy knight. But what if I told you the man who plays Ser Davos on TV has a better story than the character himself? Meet Liam Cunningham.

The Irish-born actor grew up in a family of seven in a modest home with his parents, three sisters, and brother. His father made a living working on the Dublin docks.

After seeing the way his father was treated at work, Liam decided he never wanted to rely on someone else for money.

The seed was planted. He didn’t want to take the conventional route of working for “the man”. But it’d take many years before that vision came to fruition.

One day, when he was walking home from school with some friends, Cunningham ended up at an Electricity Supply Board show room. Along with his buddies, he filled out an application for an apprenticeship.

While Liam was in the process of starting a career as an electrician, his father’s career was falling apart — soon becoming unemployed.

“He was given a small amount of redundancy money when he left, which he dually put through his liver.”

Despite the unfortunate circumstances his family endured, Liam insists he had a happy life.

“I had an absolutely textbook gorgeous childhood, you know, without much money.”

Before Westeros: The African Safari

Living at home, working as an electrician in the city, Liam Cunningham was a normal, working-class guy. But then, for the first time, a small window of opportunity opened for him.

After their country gained independence from the British, Zimbabwean officials came to Ireland looking for electricians to run their high-voltage transmission networks. Cunningham pounced on the opportunity.

At the age of 23, he made the first spontaneous decision of his life — leaving home, marrying his girlfriend, and moving to Africa.

He looked after the power supply at a safari park while teaching native electricians the ins and outs of the job. The park spanned over 11,000 square miles, nearly the size of Belgium, and was home to more than 16,000 elephants, lions, cheetahs, and leopards.

“It was complete culture shock. Eye-opening…A bit scary, but in a good way.”

Not long after getting there, he discovered a harsh reality. Racism was rampant, and the white population ostracized him because he hung out with his black co-workers outside of the job.

“I was slightly pushed to one side…the racism was appalling…they were just so old-fashioned. The thinking was just like ‘What?!’ Nuts. I didn’t get it. I still don’t get it.”

Ultimately, he spent three and a half years in Zimbabwe, among the lions and elephants. At the time, no one expected that years later he’d be among dragons and White Walkers on the most popular show in television history.

After arriving home in Dublin, he was back in the same job he spent the past 11 years doing.

Except now, the Irish economy had taken a major hit. Things just weren’t the same, and Cunningham was having a hard time getting re-adjusted to the city life.

“The only thing I was interested in was motorsport and movies and good drama. I couldn’t afford to be buying racing cars or bikes, so I thought I’d have a go at the acting.”

So for two years, he spent the workweek as an electrician, stacking cash, while he learned the ropes of acting on the weekends. Then, in 1989, he finally turned in his letter of resignation.

“I had no choice. Just in my head I had no choice…I wasn’t doing it because I had a great plan. I kind of fell in love with [acting] when I started doing it. It kind of was like a smack in the mouth.”

People at acting school told him he needed to seriously pursue it. They saw the talent. And Cunningham was afraid of what might happen if he didn’t listen to them — never knowing what could’ve been.

“It was the fear of regret that made me go for it.”

“Stupid move. On a spreadsheet, it’s a stupid thing to do. But it’s like…fortune favors the brave…In retrospect it probably looks good. But naivety is a wonderful thing.”

While taking classes at a local acting school, he was doing some electrical work for his teacher.

At the time, his acting school was putting on a production called The Lament of Arthur Cleary. The play is about a working-class man who returns to Dublin after being away for years. But the man feels lost in the city of his youth — it’s infested with drugs, unemployment, and money-lenders.

“The guy who was playing the lead…was leaving the play. And I really never did anything before that…and then I got offered the role because I’d lived the research.”

He did well enough to continue with the production, going on tour in the U.S. It was his first big break, and served as a launching pad for his acting career.

Later on, Cunningham had the opportunity to do another play. This time it was Shakespeare, and his character gave a long opening monologue he needed to memorize. That’s when things got rocky for him.

“That’s the first time I’d ever experienced panic attacks…horrific, horrific panic attacks because I just thought, ‘I’ve decided to do this and I’m about to ruin my own career.'”

At the time, he was staying at his sister’s house in her spare bedroom to stay close to the production. And things weren’t going well.

He was out of his element, surrounded by highly intelligent, well-educated people, and felt like he didn’t belong.

So how’d it turn out?

From The Stage to HBO

After 171 performances of the Shakespeare production, he appeared in a multitude of other plays and his career started to take off.

Cunningham spent 20 years doing various television shows and movies, and working his way up the totem pole. He always chose his roles very carefully, which is why he jumped at the chance to be a part of HBO’s Game of Thrones after reading the script.

But when he auditioned for the show, things didn’t go as planned.

“In true Hollywood fashion they came back after I’d met them and said, ‘Look, it hasn’t worked for you but…in the second season we have some really interesting characters that we’d like to talk to you about,’ and that’s kind of the standard ‘piss off’ from Hollywood.”

He put it to the side, thinking he’d blew his chance.

But a year later, before shooting season two, HBO came back to him with the Davos Seaworth character. Cunningham jumped on board right away and has been with the show ever since.

According to Forbes, Game of Thrones is broadcast across 207 countries and nets well over 33 million viewers each season.

From the streets of Dublin, to the grasslands of Zimbabwe, and all the way to the Seven Kingdoms, Liam Cunningham has certainly come a long way.