Philadelphia Flyers’ goalie Carter Hart is about to break the internet. And, no, we’re not talking about breaking the internet in the way Gritty, the Flyers’ new mascot, did for 15 minutes at the beginning of the week.

I was planning on writing this article way back in June. Before anyone but me was ready to think about ice hockey again.

Hart is a 20-year-old goalie who has never played an NHL game. But he’s under contract with the Philadelphia Flyers, a team with a forlorn goaltending storyline for the last 30 years.

Their crestfallen fans, without a championship for almost as long as the Toronto Maple Leafs, have ravenously snatched up any and every hope between the pipes for the last three decades (remember Ilya “One Month Wonder” Bryzgalov? We do, but not for anything on the ice).

So what’s so special about Hart, a kid who fell all the way to 48th overall in the 2016 draft? 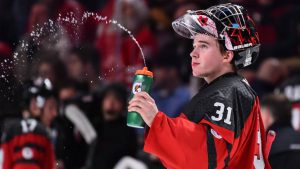 How about a 31-6-3 record in his final year of juniors last year? He earned it, with a .947 save percentage and miniscule 1.60 goals-against-average in the notoriously pond-hockey atmosphere of the Canadian Western Hockey League.

His numbers were built on the strength of Carey Price-like mobility, and a technician-like approach to the positioning areas of goaltending.

Two experienced Flyers goalies are already hurt as we sit here late in the preseason. Michal Neuvirth and Alex Lyon could both potentially miss the first month of the season. This opens the door for Hart to beat out the once future hope, Anthony Stolarz, for the backup gig on opening night.

But, there’s this 20-years-old thing.

Ask any front office executive, and they’ll likely tell you how important it is to let a young goaltender marinate in the minors for at least a couple of seasons before throwing him to the wolves.

Executives and fans alike have a long-standing belief that you will ruin your prized young investment by rushing him to the show, which has led to this magical age cutoff of 20-years-old, which is often the age of a player their first year after exhausting Canadian Junior eligibility.

History tells an interesting story, though.

In the NHL annals, only 25 (gulp! That many? The horror!) goaltenders have played more than 20 games in their age-20 season. 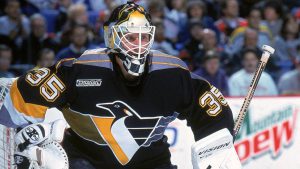 That doesn’t sound too promising, does it?

One of the Calder Trophies belongs to Tom Barasso. He won the Rookie of the Year when he was 18-years-old, and he was in his third season by age 20.

The other Calder belongs to Steve Mason.

Following his 2009 rookie campaign, the young Blue Jacket became a certifiable headcase, and, of course, the Flyers thought he was the perfect goalie to rest their hopes on. Who wouldn’t take Mason’s 2014-15 season numbers: 2.25/.928? However, they were largely overshadowed by the Flyers’ offensive ineptitude at even strength. Aside from that, Mason has been decidedly mediocre in his career. 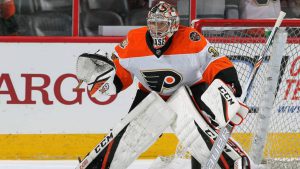 However, those two both prove Hart can come in and have success right away, despite his young age.

The league only recorded save percentage for 20 of the rookie seasons in question. I researched 11 of them vs. that season’s league average, hoping to make the argument against Hart based on that. But I gave up when 8 of those 11 percentages were above league average, and had a new tune to sing.

Carey Price was absolutely superlative his rookie season, blocking pucks at a .920 rate (average in 07-08 was .909). Yeah, he faltered in the playoffs that year, but he’s now a future Hall of Famer.

Jim “The Net Detective” Carey (yes, that was a thing) debuted in 94-95 with a save percentage 12 points above the league average in 28 games. He was named to the NHL All-Rookie team as a, you guessed it, 20-year-old.

He won the Vezina Trophy the next year. Then he disappeared from the face of the Earth with an .884 save percentage in 73 games over the next 3 years, which led to the end of his career. 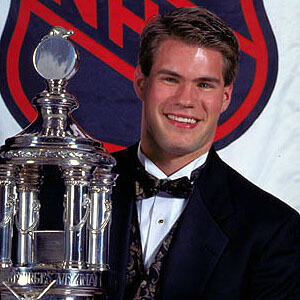 One might surmise that he was a headcase to begin with, and pin his disintegration on a dreadful playoff series in 1996, followed closely by his midseason trade from the only team he’d known at the NHL level.

Jocelyn Thibault posted a .907 save percentage his rookie season in the midst of being traded to Montreal for the legendary Patrick Roy. He then spent two full seasons as a hometown kid trying to live up to the stature of the legend. And he did a solid job, all things considered.

Speaking of Roy, he’s on this list as well. He couldn’t have landed in a better place in 1985-86, and the Montreal Canadiens benefitted from the youngster as well. Bolstered by strong defense and offense in front of him, Roy posted a league-average save percentage that season. The legend of St. Patrick was born that postseason, as he led Le Bleu-Blanc-Rouge to their 23rd Stanley Cup.

In the immortal words of F.P. Santangelo, “Call him up, he’s ready.”

Call him up even if he’s not completely ready. History approves.

Will Carter Hart solve the Flyers’ goalie problems? Comment below.