The Stanley Cup Playoffs are finally here and the 2018 brand comes with a few new features. These new features include an expansion team in the Vegas Golden Knights, a throwback team in the Colorado Avalanche, and the energized Winnipeg Jets for the Western Conference.

However, the most surprising detail in the West is that the Chicago Blackhawks are not playing playoff hockey this season. The conference is evolving and the aforementioned teams are here to stay.

As far as the Eastern Conference goes, the lack of the New York Rangers in the playoffs is a complete shock. The East, specifically the Metropolitan Division, is slowly becoming a hockey powerhouse.

The Met is sending five teams to the Stanley Cup Playoffs, all of which are cup contenders, including the rejuvenated New Jersey Devils and a gritty Philadelphia Flyers team.

The conference has taken home the cup two years in a row via the Pittsburgh Penguins, but there is a wider range of teams to watch out for this time around.

With the start of Round 1 last night, the following will dictate what to look for throughout the entirety of the Stanley Cup Playoffs.

You might say to yourself, “New Jersey? Aren’t they the second wildcard team?”. The answer is yes, they are. However, they are not just a wildcard team that snuck into the playoffs.

The Devils have been playing fearless hockey and won high-quality matchups down the stretch to propel themselves into the playoffs. In the last 10 games, New Jersey put together a record of 7-2-1. One of those losses came to the Caps with Taylor Hall taking a breather after they’d already clinched a playoff spot.

Ultimately, they are the team to watch based off of their first round matchup against the Atlantic Divisional winner Tampa Bay Lightning. The Devils recorded a clean sweep of the Lightning during the regular season.

While the playoffs are a different monster, the Devils have the utmost confidence going into this series. And they certainly have the firepower to win it behind the goaltending of Keith Kinkaid and Corey Schneider, as well as the leadership and fantastic play of Taylor Hall.

Overall, the speed and tenacity of the Devils can slingshot them deep into the Stanley Cup Playoffs. 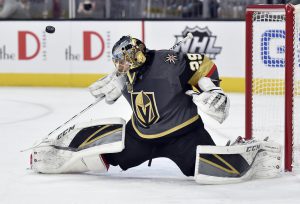 The Knights are having a spectacular inaugural season, making the playoffs within their first year of existence. For that reason alone, they are a team to watch in this year’s Stanley Cup Playoffs.

But they are much more than that. The Knights are comprised of seasoned veterans with years of playoff experience in goaltender Marc-Andre Fleury and forward James Neal. Look for these two to lead this team deep into the playoffs and possibly the Stanley Cup Final.

In addition to Neal and Fleury, Vegas has a special talent brewing in a young two-way forward by the name of William Karlsson. The 25-year-old Swedish born player piled up a career-high 43 goals on top of 35 assists in a breakout year.

If Karlsson keeps up his stellar play, the Knights will be a force to be reckoned with in the Western Conference.

If everything goes the right way in Round 1, the Penguins and Capitals will face off yet again in the Stanley Cup Playoffs. The Penguins have prevailed in the most recent years and Washington sports cannot seem to get it together in their respective postseasons.

However, every year is different. This might just be the year that the Capitals play to their full potential and overcome each and every team like they can. Alexander Ovechkin is still Alexander Ovechkin, and it would be safe to assume that hockey fans would like to see him stick it to the infamous Sidney Crosby.

With the help of Holtby and Grubauer in net for Washington, the Capitals and Penguins can put together a series to remember.

The 2018 NHL Stanley Cup Playoffs are blessing hockey fans with an immense amount of young talent and new faces to get familiar with.

Look for these young players to make an impact for their respective teams: