Looking at this year’s leaders in receiving yards, you’ll see many of the usual suspects. Antonio Brown. De’Andre Hopkins. Julio Jones. But there is one name that doesn’t blend in with the rest of the pack. For the first time in his career, he’s not getting overlooked. In lighting up the stat sheet week in and week out, Adam Thielen is inching closer to becoming a household name.

After redshirting in 2008, Thielen was named Minnesota State’s Offensive Player of the Year in 2010. He was the top target in the passing attack in each of his final three college seasons. He also made contributions on special teams as the punt and kick returner. And then, when other graduating players across the country were getting ready to go pro, Thielen did not even receive an invite to the NFL Combine. 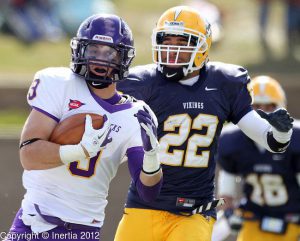 Despite posting over 1,000 receiving yards and 8 touchdowns in just 14 games his senior year, the fact was that he did it at the Division II level. Not many teams send their scouts to attend Division II football games in the midwest in the freezing winter months. Regardless, Thielen was determined to prove his worth.

So he attended the Regional Combine: a place for undersized, overlooked players to show their stuff. Players have to pay their own way and there are no scouts in attendance, but the Combine results are sent to all 32 NFL teams.

Turns out, Thielen’s 40-yard dash time (4.45) was good enough to land him an invite to the Super Regional Combine. There, he turned heads with an impressive showing that put him on professional scouts’ radar.

Still, the NFL Draft came and went. With each passing round, Thielen waited for a call that never came. In going undrafted, Thielen still didn’t quit. He got invited to two rookie tryouts. One with the Carolina Panthers and the other with the Minnesota Vikings, the team he grew up rooting for. Of course with tryouts, there are no guarantees.

Thielen made the 90-man roster out of Viking’s training camp in 2013. But ultimately, he was released and signed to the practice squad. After another year of hard work, Thielen finally earned a spot on the 53-man roster in 2014.

Fast forward three years and he’s now top-3 in the NFL in receptions, receiving yards, and receiving yards per game. Thielen started as one of many Division II football players in the nation. After years of fighting to prove himself, he now stands amongst the top receivers in the game.