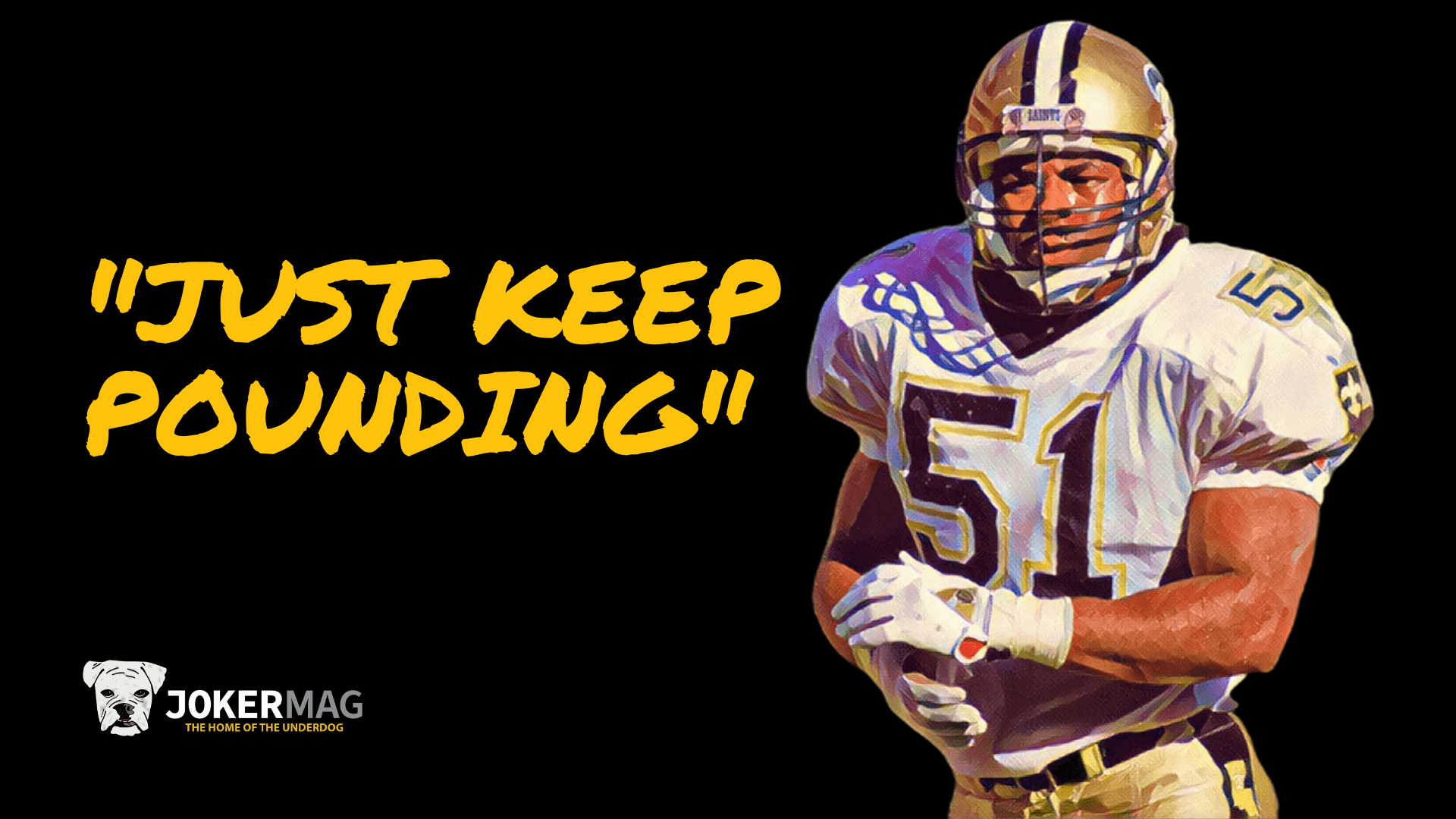 Sam Mills receives far too little recognition for what he accomplished as a football player. The Hall of Fame linebacker overcame every obstacle imaginable.

So how did an undersized, overlooked linebacker become one of football’s all-time greats?

Raised in the beachside town of Long Branch, New Jersey, Sam Mills was smaller than most kids his age. While a standout two-sport athlete in high school (football and wrestling), he wasn’t sought after by college scouts.

With no college offers, he stayed in New Jersey and walked on at Division III Montclair State. There, he became the school’s all-time leader in career tackles (501) and a two-time All-American.

“I always kind of felt like I have nothing to lose because they always thought…that I was too small to do it anyway,” Mills said in an interview.

Despite his collegiate success, the odds were stacked against him at the next level. While pro scouts loved his game tape, they lost interest when they heard Mills was only 5’9″.

After he went undrafted, Mills’ old Pop Warner coach helped get him a try-out with the Cleveland Browns. He stuck around through training camp but was cut at the end of the preseason.

Then he went up to Toronto to try out for the Canadian Football League, but he didn’t make the team there either.

With nowhere left to turn, Mills took a job as a photography teacher at East Orange High School in New Jersey. The window of opportunity was all but closed.

But in August of 1982, everything changed.

“Sam said they were letting a guy go that he didn’t think they should be letting go, but his staff and defensive coordinator wanted to do it,” Peterson said. “He said they didn’t think he was big enough to play.”

So Peterson offered Sam Mills an unguaranteed $20,000 first-year salary, plus a $500 signing bonus to play for the Philadelphia Stars. It may not look like much now, but it meant everything to a man who spent his life dreaming of a pro contract.

But it wouldn’t be easy.

Peterson’s first head coaching hire, George Perles, said the same thing everyone else did: “We can’t play professional football with a 5’9″ middle linebacker, it’s not going to work. We’ve got to let him go.”

Perles quit before ever coaching a game, but his replacement – Jim Mora – had the same reservations.

“He saw him in one no-pads minicamp before we left for training camp and said, ‘Carl, we can’t play with a 5-9 linebacker. This is professional football,'” Peterson said. “I told Jim the same thing I told George: ‘We’re not going to let him go until we see him hit.'”

As the great Lawrence Taylor once said, “Just once, I’d like to get a hit like he does. It has to be better than sex.”

Soon, Mora became a believer. And Sam Mills anchored the best defense in the USFL’s 3-year existence, leading the Stars to back-to-back championships.

“He was the best player I ever coached,” said Mora – a massive compliment from a man who also coached the likes of Peyton Manning and Marvin Harrison.

After the Stars’ second USFL title in 1985, Jim Mora returned to the NFL to coach the New Orleans Saints. And he brought his best linebacker with him.

Entering the NFL at 27 years old, Sam Mills became one of the league’s oldest rookies ever.

Although he finally achieved his dream, he never got complacent.

“He played with a chip on his shoulder,” said his Stars teammate Glenn Howard.

“Even after that first year when he was the league’s Defensive Player of the Year, he still played like he needed to prove himself to people.”

After entering the league at an age when most hang up their cleats, Sam Mills stuck around for 12 NFL seasons.

Upon retirement at age 38, he closed the book on an NFL career that included:

The following season, he transitioned from star player to beloved assistant coach for the Carolina Panthers.

In his fifth season as a coach, he was diagnosed with cancer and told he had just three months to live.

With the Panthers mounting a playoff push, Mills delivered a passionate speech that has lived in the team’s lore ever since:

“When I found out I had cancer, there were two things I could do: quit or keep pounding. I’m a fighter. I kept pounding. You’re fighters, too. Keep pounding!”

He lived 17 months longer than doctors predicted – defying the odds until the very end – before passing away at age 45 in April of 2005.

Sam Mills left behind a legacy unlike any other.

His son, Sam Mills III, told Montclair Magazine, “I think people gravitated to him because of his path to get to the NFL. And he never forgot that journey. That journey helped make him who he was.”

In his 20th and final year of eligibility, Sam Mills was elected into the Pro Football Hall of Fame.

“Sam worked harder than his peers,” said his wife, Melanie, in his posthumous induction ceremony. “He took advantage of every opportunity.”

“Sam was always ready to show you what hard work looked like. He led by example and people followed. He was more than just a great football player: He was a father, a friend, a husband, and a leader who always kept pounding, no matter what the odds were.”

Mills’ mantra, “Keep Pounding”, is the embodiment of his career. And the saying lives on as the official slogan of the Carolina Panthers.

It’s a reminder of what we can accomplish when we refuse to give up.

As columnist Scott Fowler said, “The next time you’re in a tight spot in your own life, think of Sam Mills. And keep pounding.”

Want more stories like this? Join our Underdog Newsletter!