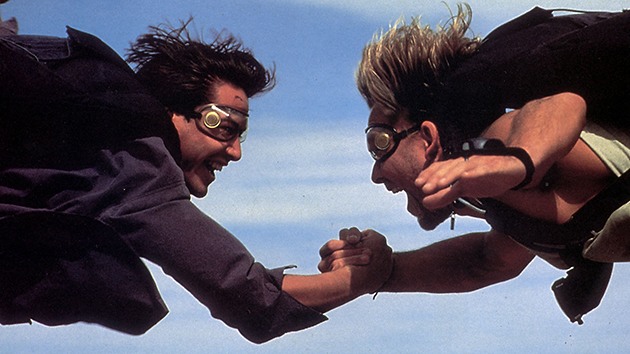 What more can you ask for in an action film?  Point Break has it all.

And if that’s not enough, The Fast and the Furious ripped off the story.  That’s right.  The wildly successful blockbuster franchise is based on the same premise.

It follows in Point Break’s exact footsteps: a quiet, composed undercover cop befriending an adrenaline junkie covertly committing felonies behind his back.  The waitress he falls in love with having a personal connection to said criminal.

The internal struggle of the main character to decide where his loyalties truly lie: his newfound friendship with a felon, or his duty as an undercover agent.

Point Break is a real one-of-a-kind film (which is why the 2015 remake is an injustice to fans everywhere—but that’s another story for another day).  Patrick Swayze breathes life into Bodhi, an interesting and complex character.

Although he is technically the antagonist of the story, it is so hard to root against him.  Yes, he robs banks.  Yes, he points guns at people.  Yes, he threatens to kill them.  As crazy as it sounds, though, he seems like a decent guy at heart.

Bodhi’s outlook on life is different than most.  Even though he commits crimes to get by and make a living, he has a peace-and-love type of mindset.

There is a quote from one scene that sums his character up best:

“This was never about money for us, it was about us against the system. That system that kills the human spirit. We stand for something, to those dead souls inching along the freeways in their metal coffins.  We show them that the human sprit is still alive.”

Johnny Utah (killer quarterback name, by the way), Keanu Reeves’ character and the protagonist of the story, learns a lot from Bodhi and begins to embrace his philosophy on life.

He starts to enjoy the carefree, ‘carpe diem’, surfer lifestyle.  But just as he gets comfortable in this escape, he is ripped back down to Earth and forced to face reality.  He is an FBI agent and he has a job to do.  That is where the excitement comes in.

The viewer shares Utah’s conflict; we want to root for Bodhi too.  We can hope that everyone comes out unscathed and Bodhi and Utah can be friends forever, but we too have to acknowledge the reality of the situation.

Point Break is not just about a conflict between its characters, it is about the conflict of life.  It teaches us that yes, we can have our escapes and the things that we enjoy but when it comes down to it, there are realities we have to face and things we have to do.

In all aspects, Point Break is the perfect action movie.