Marcus Peters & The Culture of An NFL Locker Room 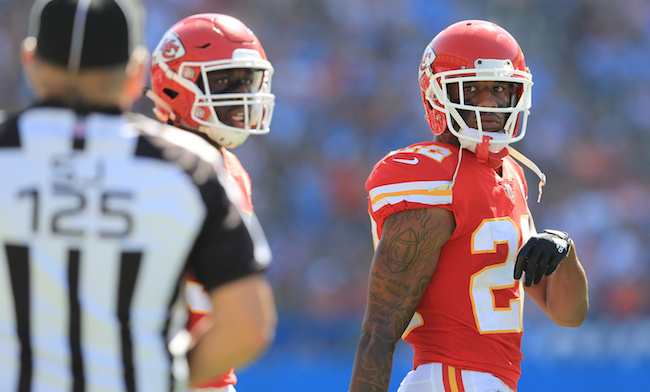 Josh McCown scrambles 15 yards behind the line of scrimmage. As the defensive line closes in, he heaves a throw out of the back corner of the end zone. A yellow penalty flag appears. Then, in the blink of an eye, Marcus Peters picks it up and chucks it six rows deep into the stands.

As a fan waves the flag in excitement, Peters walks off the field and into the locker room.  There’s just one problem — he wasn’t ejected.  When he realizes this, he returns to the field without socks.  Later, the team hands him a one-game suspension.

Friday afternoon, reports emerged that the Chiefs are trading Peters, the 18th overall selection in the 2015 NFL Draft, to the Rams.  The 25-year-old, 2-time Pro Bowler’s talent was never a question for the Kansas City coaching staff.  But, it’s become apparent that his attitude was just too much to bear.

The culture of a professional sports team is a controversial subject in today’s “hot take” sports media circuit.  Head coaches are either scrutinized or praised for placing an emphasis on team culture.  Of course, their treatment by the media depends on their success in the win column.

Ex-Buccaneers coach Greg Schiano was ripped for his “Schiano Men” approach.  More recently, former Eagles and 49ers coach Chip Kelly was criticized for cutting and trading away players that didn’t fit his culture.

On the other hand, Bill Belichick is applauded for his strict team rules.  When he cuts a big-name player, no one blinks an eye.  If Belichick doesn’t want him, they say, there must be something wrong with him.

In a year that saw the underdog Philadelphia Eagles run the table, team culture is back in the spotlight.  It plays a key role in the success of a team.  When a team is clicking both on and off the field, you can sense it.  Fans will tell you, “this team just feels different”.

Super Bowl-winning coach Bill Cowher once stated, “All players want three things: structure, direction and accountability”.  When a team operates as a single unit, the sky is the limit.

That, in a nutshell, is why the Chiefs decided to unload Marcus Peters.  A team can only get so far when it’s bogged down by selfish behavior from a star player.  Instead of putting up with it any longer, Kansas City decided cash in on Peters’ talent and move forward building a better locker room.

Whether Peters will clean up his act in Los Angeles remains to be seen.  But one thing is clear: in the NFL, and sports in general, team culture trumps talent every time.