Brady Policelli Looks to Make His Mark With Detroit 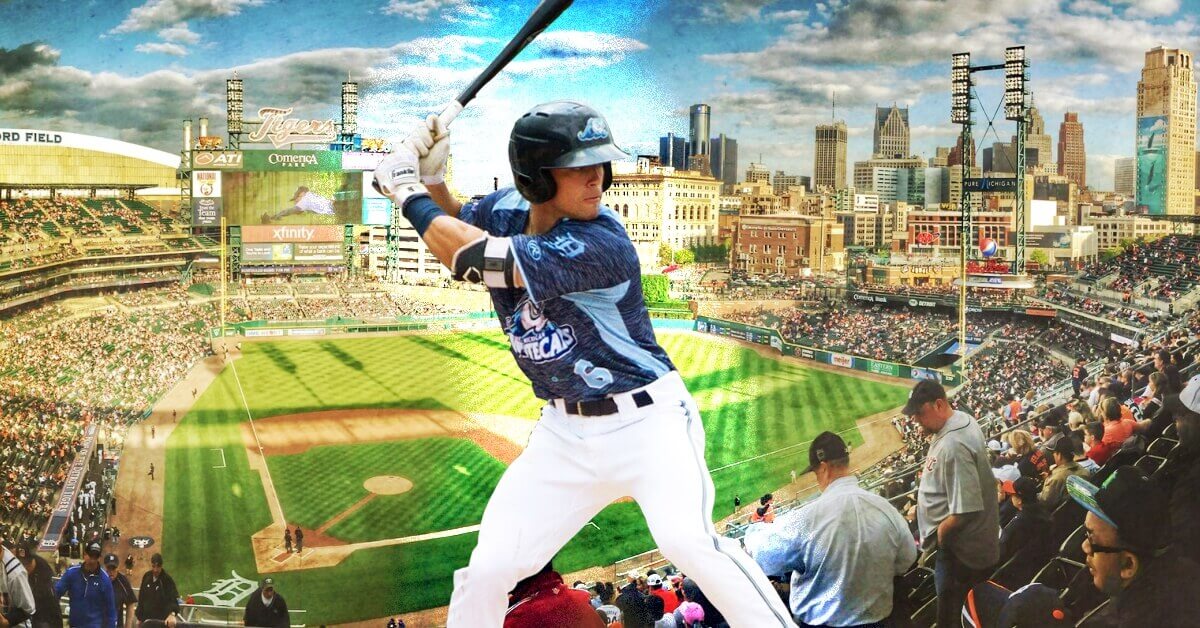 Just 2.1% of high school baseball players will go on to compete at a Division 1 level. Of those talented enough to play at the highest collegiate rank, 9.1% will have the chance to play professional baseball.

Tigers prospect Brady Policelli is one of the select few athletes to accomplish both feats.

Policelli hails from the small town of Walkersville, Maryland. With a population of just over 6,000 people, the area is known more for its endless farm fields and smell of manure.

Not exactly a hotbed for Division 1 or professional scouts.

Despite that, Brady still managed to drum up interest from several local D1 schools such as Longwood University, Towson, UMBC, and MD Eastern Shore.

“I had talked to some bigger schools that I had interest in, but they didn’t offer,” said Policelli, a decision many schools surely are kicking themselves over.

His illustrious high school career featured All-Area and All-County honors for baseball, and even an All-State selection for football after starring as a 3-time starter at quarterback. He would eventually accept a scholarship to play baseball at Towson, a decision that would pay dividends for his future.

His success would pick up right where it left off after arriving on campus. Brady would go on to start 134 games over his three seasons at Towson. His baseball acumen allowed him to transition seamlessly across the diamond, as he started games at catcher, second base, shortstop, and third base.

It’s not often that you see a catcher with the ability to play middle infield, which is a nod to the rare athletic prowess he demonstrates. By Policelli’s junior season, he cemented himself as a one of the premier players on his team and in the conference.

That performance drew the attention of major league scouts.

Then, in the 13th round of the 2016 MLB Draft, the Detroit Tigers selected Brady Policelli as a catcher at pick #385.

“It was a pretty surreal feeling knowing that all my hard work up to that point had paid off, and got me one step closer to fulfilling my dream of playing in the big leagues,” explained Policelli. “Becoming a professional athlete was always a huge goal of mine, and achieving that is something I’ll always remember.”

He signed with Detroit almost immediately following the draft and made his professional debut thereafter. His first season was a learning experience and a series of adjustments.

He posted un-Policelli-like numbers, finishing with a batting average below .200 in 26 games between rookie ball and low-A.

The biggest difference from college to pro ball for Policelli? “The velocity, for sure,” he said. But the offensive side wasn’t the only struggle he faced.

“I made the transition from infielder to full-time catcher in my first year of pro ball, and it wasn’t easy.”

After his first offseason, Brady was determined to improve upon his debut. The Tigers would start him off in high-A for the 2017 opener. “Heading into my second season, I was finally starting to feel comfortable behind the plate.”

Then disaster struck. A broken thumb. Major surgery. Season over.

“It happened 4 games into my season, so it set me out the whole year.”

His career was at a crossroads. After two seasons of professional baseball under his belt, Policelli had only 30 career games to his name. Entering his age 23 season, having yet to fully establish himself, and with no experience above A-ball, the clock was ticking on his lifelong dream.

“It was a tough time for me…Mentally it hit me kind of hard. The minor leagues are a tough business if you don’t perform, or let alone can’t get on the field.”

But it was family that kept Brady focused on his goal.

“I remember talking to my parents about the possibility that the 2018 spring training was the last chance to prove myself. They reminded me that I’ve never been the type to give up, and I couldn’t let my injury dictate my whole career.”

After rehab, he was determined to show the talent and ability that got him selected in the 2016 Draft. “I used all that down time to really better myself as a player. I worked on my swing and my defense behind the plate to make sure I came into the 2018 spring the best player I could be.”

His work ethic and drive would soon be rewarded.

Brady parlayed his spring performance into an assignment with the West Michigan Whitecaps, the Tigers’ single-A affiliate. With his returned health, his true talent and ability would show.

Policelli displayed his versatility by starting games at catcher, second base, and right field. He swiped 19 bases, unheard of speed from the catching position. He flashed his raw power more often during the 2018 season, as evidenced by his 19 doubles, 6 triples, and 7 homers, which included his first as a professional. Most importantly, he appeared in 98 total games, more than tripling his career total to that point.

On his breakout year, Policelli said, “I made the most of my opportunities, and ended up having a decent 2018 season.” That “decent” season surely turned some heads in the Tigers front office, as it earned him a spring invitation to Major League camp in Lakeland, Florida for the 2019 season.

“It’s both a motivating and rewarding feeling. It’s an awesome opportunity that I want to make the most out of.”

While the Tigers are in the midst of a full rebuild, this is the most opportune time for players like Policelli to shine, as Detroit looks for the next young wave of players to build around.

Without a current long-term option at catcher, the time is now for him to leave his mark with the Major League coaching staff in the spring.

At this time last year, he was reporting to minor league spring training unsure of when his opportunities would run dry. Now, he will be taking orders from veteran manager Ron Gardenhire, and share the same locker room and dugout with future Hall of Famer Miguel Cabrera.

Brady’s work ethic, self-belief, and ability to power through adversity has changed his fortunes and outlook for the better.

While he chases his dream of playing Major League Baseball, his small town of Walkersville, Maryland will surely be watching and cheering from afar.

Enjoy this story? Check out our FREE eBook, “The Anatomy of An Underdog” for more.

Get the best underdog stories delivered straight to your inbox every week.