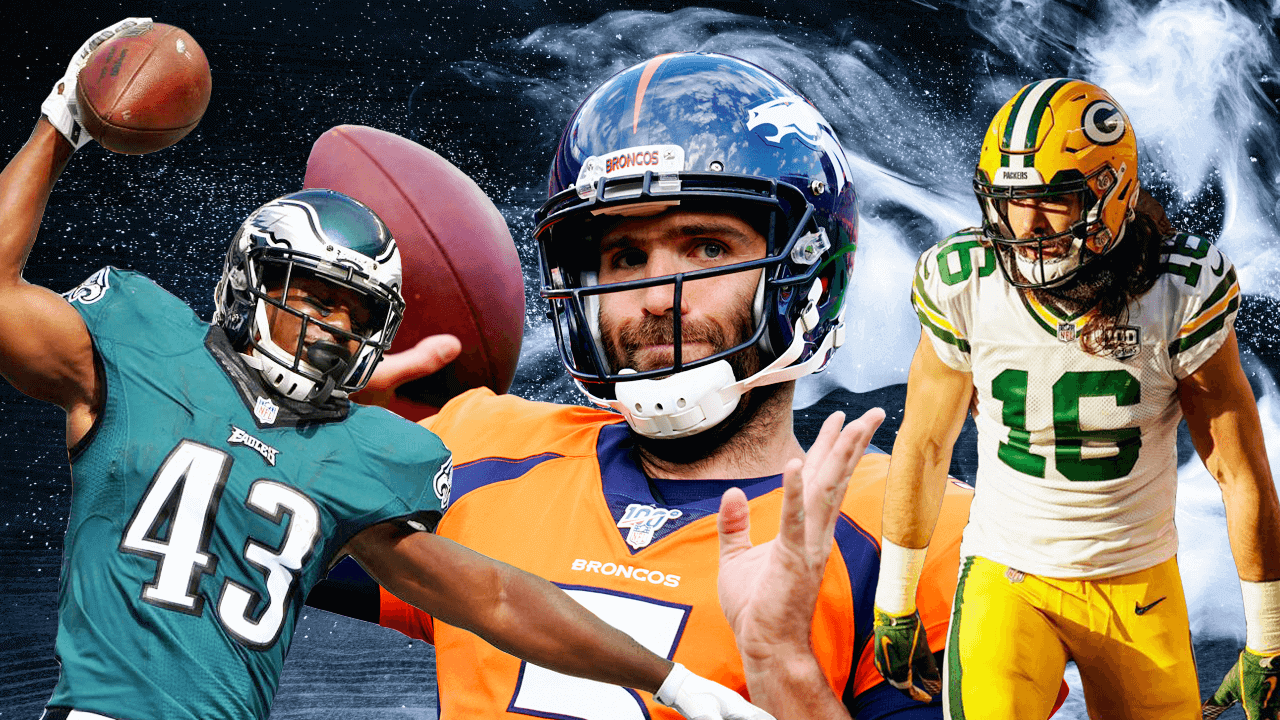 In the immortal words of one of the gritty heroes referenced in this piece once said: “An underdog is a hungry dog.”  With football season fast approaching, I asked our esteemed panel of Joker Mag football aficionados about their favorite football underdog stories.

In our 2019 NFL preview, our experts share their favorite tales of grit and perseverance, and also predict their best bets for unlikely success stories in the upcoming season.

They also mention some quotes and pump-up tracks that will have you preparing to run through a wall.  Coach Eric Taylor would be proud.

What are your favorite football underdog stories or memories?

Tyler O’Shea: The 2017 Philadelphia Eagles season.  The team lost their MVP candidate QB in Week 14 and in came Nick Foles, surrounded by a world of doubters across the entire sports landscape.  This is a guy who was drafted by Andy Reid, shipped away by the next regime, and then returned to Philadelphia after strongly considering early retirement.  We all know what happened next. Poetic justice, baby.

Dom Fierro: The 2010 Green Bay Packers season. Only Aaron Rodgers’ third season as the starting QB. They finished 10-6, second in the NFC North, and second Wild Card team. From there they went on to beat the Eagles, the [top-seeded] Falcons, and Bears all on the road on the way to an eventual Super Bowl victory.

Chris Morris: I am going to undoubtedly agree with Tyler. As a lifelong Philadelphia Eagles fan, the 2017 team captured the hearts and souls of an entire city/region. For a franchise that had gone 57 years without a championship, they certainly delivered in the most dramatic way possible. MVP candidate Carson Wentz went down with a torn ACL in Week 14 and in stepped Nick Foles to engineer this incredible underdog story.

After struggling in the final weeks of the regular season, Foles caught fire in the playoffs, leading the Eagles to home victories over the Falcons and Vikings before upsetting the hated New England Patriots in Super Bowl LII. The Eagles won all of their playoff games as an underdog. The true mark of a champion.

Led by overlooked veteran, Drew Brees, and third-round pick diamond in the rough, Alvin Kamara, the Saints have had great regular season success. But due to the Minnesota Miracle in the playoffs two years ago and one of the worst officiating no-calls in sports history, they have received the short end of the stick in two consecutive playoffs.

Drew Brees is not getting any younger, but I root for them to finally get over the hump and reach the Super Bowl (sorry, Eagles fans) where I hope they lose to, none other than my New England Patriots.

Who is the quintessential football underdog?

Tyler: I’m starting to sound a lot like an Eagles homer here, but the answer is Darren Sproles. A 5’6″ pass-catching machine, the guy changed the way NFL teams view the running back position. He also paved the way for fellow undersized backs to make their mark. We wouldn’t have guys like Tarik Cohen and Chris Thompson without #43.

Dom: Packers wide receiver Jake Kumerow. He was an undrafted free agent out of D-III powerhouse Wisconsin-Whitewater and eventually landed with the Packers as his second team.

Last year he was having a stellar preseason until an unfortunate injury put things on hold until Week 16. This year he is once again having a big preseason and looks like he could be a big-time player for the Packers.

Chris: Staying with the Eagles theme here, I have to go with All-Pro center Jason Kelce. The 6th round pick in 2011 out of Cincinnati was largely unknown when he came to Philadelphia.

However, the offensive line coach at the time, Howard Mudd, had a knack for grooming undersized centers. He gave Kelce a chance to start right from the beginning and Kelce never looked back. He’s [anchored] the Eagles offensive line ever since with multiple All-Pro selections and trips to the Pro Bowl.

Of course, he also delivered the greatest speech from a pro athlete in Philadelphia history at the Super Bowl parade.

Henry: I have to go with a young man who has yet to play in an NFL game, but already has had a storied football career. From catching crucial passes in the College Football Playoffs from Deshaun Watson and Trevor Lawrence, Hunter Renfrow continues to deliver.

Am I bewildered that my Patriots did not draft him? Of course. We could have had the greatest history of slot-receivers to ever play in the NFL. But I digress. The man who walked-on to Clemson’s football team became one of the most sure-handed and trusted receivers in the NCAA these past few years.

Sure, there are guys who are faster, bigger, and stronger than Hunter, but I doubt many would want anyone [else] to line up in the slot on a crucial third-down where a catch needs to be made. Don’t screw this guy’s career up, Jon Gruden.

What under-the-radar teams will have great seasons?

Tyler: I’m going to pick the Tampa Bay Buccaneers to exceed expectations this year. Vegas oddsmakers have their over/under win total at 6.5 and, with Bruce Arians at the helm, I’ll take the over.

Dom: While they may not be the biggest underdog with the offseason they had, my pick is the New York Jets. With second-year QB Sam Darnold, a new coaching staff, and a revamped AFC East that looks to be better than usual, I have this team making the playoffs as a Wild Card at 9-7 or 10-6, easily surpassing the betting O/U of 7.

Troy Cavell: WHO DEY!?!? WHO DEY THINK GON’ BEAT DEM BENGALS!?!? I like the Bengals to sneak in as the sixth seed in the playoffs, and potentially win the division if Cleveland falters.

They only have three of what I’d call “for sure” losses vs NE, LA, and SEA. I think they sweep BAL and split between CLE and PIT in the division. Joe Mixon will solidify himself as a top-5 RB in the league by season’s end.

Chris: The Denver Broncos will win 10 games and make the playoffs as a Wild Card team this season. I’ve grown increasingly confident in the Broncos over the past few weeks. Emmanuel Sanders seems to be fully recovered from a torn Achilles and Joe Flacco has had an impressive training camp.

Look for a bounce-back year from Flacco with a change of scenery. The Denver defense is also nothing to sneeze at with pass rushers Von Miller and Bradley Chubb coming off of the edge.

Henry: The Seattle Seahawks overachieved last year. With a hobbled Doug Baldwin, the only people Russell Wilson threw to were Tyler Lockett and the Three Blind Mice.

I loved how they just pounded teams with the run game last year and look out for them to do that again. We all hope that Russell Wilson will have others to throw to besides Lockett, so he does not take a beating when he has to make Houdini moves outside of the pocket because his O-Line does not know how to do their job.

Keep chewing that gum, Pete — in your Dad shoes — because you and Russell only have a few more years left to make this thing work.

Do you have any favorite football quotes or pump-up songs?

Tyler: I’ll give you two.  First, I’ve been watching a lot of Friday Night Lights lately, and “Clear eyes, full hearts, can’t lose” always fires me up.  Then I’ll just drop this video here.  Brian Dawkins, aka Weapon X, at his very best.

Dom: For my first one, I agree with Tyler. “Clear eyes, full hearts, can’t lose” is by far my favorite quote and something I also wrote on the inside of my baseball hat every year in college because of what it meant to me. One of my favorite pump-up songs is also Wanted Man by Rev Theory.

Chris: My favorite quote is also from the great Brian Dawkins. “Respect is not given, it is earned”. You have to fight for everything you get in professional sports, especially football. My favorite pump-up song is Seven Nation Army by The White Stripes.

Henry: Just look up Enter Sandman for Virginia Tech football games. It will give you goosebumps. I guarantee it.

Also, don’t forget to join The Underdog Newsletter for a weekly bite-sized rundown of the best underdog stories in sports!