Your Ultimate Guide to the 2018 FIFA World Cup

The World Cup is an epic event that takes place every four years during the summer months and it never disappoints. Every World Cup has its surprises and upsets.

But this year, the World Cup is missing two standout teams: Italy and the United States. While the U.S. is not typically a threat to win it all, it’s catastrophic that American soccer fans don’t have a dog in the race.

Despite this harsh reality, the World Cup is still worth the watch.

There are three ‘Matchdays’ in the group stage of the World Cup and there are four teams per group. This means that every team in each group plays each other once.

Here are 3 must-watch matches, one from each ‘Matchday’, and 5 new players to look out for in the 2018 World Cup.

The first stage of the World Cup never disappoints. Teams come out of the gate with a voracity and passion to honor their homeland on the pitch.

This is why Germany and Mexico will put on an absolute show on Sunday morning. Germany won the World Cup in 2014 after easily polishing off a talented Brazilian team by a score of 7-1 in the semi-finals and not allowing Lionel Messi and Argentina to net a goal in the finals with a 1-0 victory.

Mexico, on the other hand, fell short in the round of 16 after losing a nail-biter to the Netherlands 2-1. But the team played with pride and determination and is most certainly looking forward to redemption in 2018.

These two teams have faced off only once, with Germany leaving victorious by a score of 2-1. Despite their brief history, this matchup would be intriguing in any circumstance. Both rosters feature tremendous talent across the board.

Germany ultimately has the better overall roster, but Mexico has midfielders and forwards that can challenge the play of any back line. Look for midfielder Jesus Corona and forward Hirving Lozano to stir up the offense with excellent pace, causing confusion for the German back line.

All that being said, Germany hasn’t changed much from the last World Cup. They still have stars such as Marco Reus, Thomas Muller, and Jerome Boateng at the realm. Look for them to utilize their size and their ability to widen the pitch to score against the far less talented Mexican defense.

Germany will struggle, but they will not fall.

Poland and Colombia each have one player at the focal point of their game plans. For Poland, it’s forward Robert Lewandowski, an exceptional talent who can score goals at will.

In 95 international appearances, the Polish superstar has 55 goals. Look for him to put Poland on his back for the entirety of the World Cup and carry them to the round of 16.

Colombia, however, also has an elite goal scorer by the name of James Rodriguez, known simply as “James”. He won the Adidas Golden Boot in the 2014 World Cup and was one of the most electric players to watch.

Despite missing five matches throughout Colombia’s journey to this year’s World Cup, James led the team with six goals. Look for him to build on that success as the leader Colombia can depend on.

The greatest part of this matchup is that these two teams have yet to meet head-to-head. The first half of the match will most likely consist of reading tendencies and flow. The second half will certainly consist of goal-scoring on both sides.

Overall, Poland is better on the defensive side of the pitch than Colombia. Lukasz Piszcek is a more than capable defender and Wojciech Szczesny is no slouch at goalkeeper either.

In the end, Poland’s defense should hold up. There will be only two total goal scorers — Lewandowski and James.

This match comes at a critical point as it is each team’s last one of the group stage. Uruguay and Russia will likely be playing for the top seed in Group A at this time, which is exciting in general.

But what makes this match even more compelling is that Russia will have their entire country behind them. Hosting the World Cup gives them the advantage they need to compete with an experienced Uruguay club. 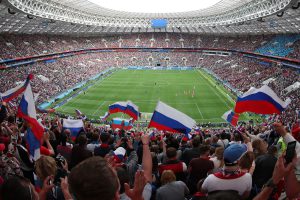 Uruguay will be powered by forwards Edinson Cavani and Luis Suarez. These two outstanding players will make it tough for defenses if they are on top of their game. This duo has the ability to put teams away on their own.

But with Russia’s stern defensive play, they may be able to withstand their attack and hold them to a reasonable amount in their final group stage match. Artem Dzyuba must pace the offense with his size and strength if Russia wants to stay in the match and compete all 90 minutes.

With Russia’s host team advantage, this will be an even match.

The following players should be on your radar for the World Cup. They are newer additions to their national teams and will be assets for their respective club.

Milinkovic is a 23-year-old with exceptional talent. He’s only played in 4 international matches, but Serbia plans to utilize him to bring control to the midfield with crisp passing alongside Nemanja Matic.

Mario Gavranovic is a hard-working forward with experience. During the 2014 World Cup, he ruptured his cruciate ligament prior to the round of 16 and missed out on an opportunity to help his team against Argentina.

After a long layoff from international play, Gavranovic is back and ready for action. Look for him to score goals late in matches for the Swiss.

This young French forward is an absolute nightmare for opposing defenders. Dembele can fly with riveting acceleration and is capable of dribbling and finishing with both feet.

With Griezmann on the pitch as well, Dembele will likely be able to escape and find himself with a plethora of opportunities to score.

Johann Gudmundsson is a midfielder who provides Iceland with a big left foot. The 28-year-old midfielder has the ability to strike from distance and bring more energy to an already passionate Iceland team.

Being able to score from outside the box is crucial for spreading the field and dragging defenders out further than they should. Gudmundsson brings experience, as well, and could make Iceland a team to watch in this year’s World Cup.

England has not been the team it is capable of being. They’ve been quite unlucky and lost some matches that they should have won.

However, the tides will turn for England this year. They are young and rejuvenated with Lingard bringing the pace in the midfield.

Southgate, the young English coach, has many lineup options, which could mean that Lingard could start one match and come off the bench in another.

He has the speed and tenacity to pester opposing defenders and provide England with many scoring chances.