If you’re like me, you tend to judge a city by what you see, what you eat, and what you drink. Oh, and by what tangentially you have learned about the area through hit TV shows like, say, Breaking Bad.

Admittedly, I like drinking more than eating and Santa Fe is about an hour north of Heisenberg territory (i.e. Albuquerque). Regardless, Santa Fe does not disappoint. The sights, food and drink are all top notch and let’s say, act like bricks in a wall of awesome.

First off, Santa Fe is not what I expected. I mean, hey, I watched Breaking Bad religiously and was sure the scenery would provide nothing but sand and Gila monsters. I had to prepare for the inability to, as Hunter Thompson put it, “properly explain myself in this climate.”

I was dead wrong. A couple of things right off will hit you: the first is Santa Fe has green — hell, is green. It’s at 7200’ elevation and temperate, thus there are trees and foliage everywhere. I’m not talking the Amazon rainforest, but compared to Albuquerque, it might as well be. It reminded me of the Texas hill country and I noticed lavender, by smell and by sight, all around — definitely not low desert.

The second thing you’ll note is that Sante Fe is, well, quaint…unassuming, hell, just clean and laid back. I half expected a half dozen biker bars and twice as many strip clubs. Truth is, Santa Fe is a quiet, art-centric town with a reputation for it.

Apparently the place has a world-class opera house, attracting aficionados from all over the world. Despite this, the people are cool, and I didn’t see a single hipster — which is surprising for an art town.

This town is serious about art with a flair for the absurd. Just how serious and absurd, you ask? While you are there, check out the Meow Woof exhibit on Rufina Circle. Now, fair warning — do not go to this place on psychedelics. 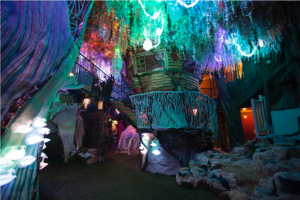 Though they do have a “fuzzy furniture recovery room” located somewhere in the maze of colorful and fully interactive displays, there’s no way you are getting out of here without a serious psychotic episode if you’re on LSD. This place is intense and, as touted, a truly immersive art experience.

It’s incredible, tactile, and like being inside the minds of Stanley Kubrick and Frank Zappa. It’s rare nowadays for me to go somewhere (especially if it’s popular) and lose track of time, but there I did. You have to see this — take a step through the looking glass and enjoy. Plus, there’s a full bar there!

Did I mention that Santa Fe is, how shall I say, an alcohol friendly town? You can get a beer, and a good one made locally, just about anywhere. Despite this, I didn’t see the usual parade of drunks, deadbeats, etc. around that most drinking towns seem to mascot.

Truthfully, Santa Fe is just not that crowded. I think that means a lower return probability for the vagrants. Maybe…it’s still kind of hazy. Anyway, it’s a capital city with about a hundred and fifty thousand folks, and they seem spread out, super chill, and friendly — and they like their tipple from time to time.

And here in Santa Fe there appears to be readily available, high-end mescal if you are into that. I know I am. Now don’t get me wrong, not all mescals are built alike. I have had my share of pond water touted as pure liquid gold. But in Santa Fe, they seem to take this stuff seriously and stock only good stuff on principle.

Check out La Riena in the El Rey on Cerrillos Road while you are there. They offer a wide variety of small batch mescals and high-end tequilas, and some absinth-like equivalents of the southwestern spirits. Rumor has it they have private, small batch, and less-than-legal brands of the good stuff. 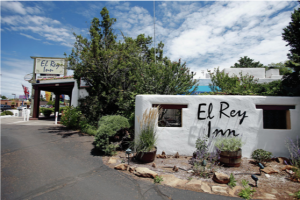 I cannot confirm or deny the existence of such, nor can I recount the mescal I drank as I lost track because they were all damn good. While gulping down the mescal, make sure you eat. Maybe not as much as me, but it helps with the hangovers.

Also, do I have to mention the green chili, red chili thing? Does anyone not know about that yet? Ok. I like the red chili. Deep, rich, and with what I think is a mole-light type flavor.

I got red chili on steak enchiladas and a cold local beer at the Thunderbird Bar and Grill in the Plaza and was set to right for days. Well, maybe hours because I just kept eating. You will too. You can’t help it; the stuff is awesome. 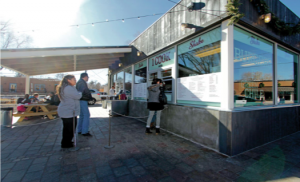 I’m guessing the owner really hasn’t talked to the Shake Shack people. Who cares, the burgers are awesome. (Credit-SantaFeNewMexican.com)

Of course, green chili is great too on a cheeseburger, which you can get everywhere. But if you want some truly next-level stuff, check out Shake Foundation  (again, on Cerrillos downtown) and get some truly great burgers. Think Shake Shack southwest and you get the idea.

Look, I can go on and on, but we have had our time here. Only other thing I have to mention to those of you in the mood to reminisce about the single greatest scientific achievement of mankind — drive 45 minutes north and check out Los Alamos and the Bradbury Museum. That’s true Heisenberg country.

The rest is on you, but don’t worry, Santa Fe makes it easy.

A Few Good Brews: The Best Craft Beers in Pennsylvania