We’ll begin our mock draft series in the NFC East, then we’ll move division by division from East to West. Before we dive in, let me first explain how these drafts work.

At the beginning of each draft, we select a team, the number of rounds, the big board, and the team needs from a panel of experts. After this process is complete, the draft begins. Each team selects based on its big board and its team needs.

Each of these drafts can produce very different results. For example, in the first draft the Browns may take Sam Darnold and in the second that may take Saquon Barkley first overall. These two picks can shape how the entire first round (and beyond) pans out.

These different drafts offer a variety of scenarios for how the draft could end up looking. We’ll discuss each team’s first three rounds while summing up the rest.

Let’s get into it.

We’ll start with the Super Bowl champion Philadelphia Eagles. The Eagles may have the most complete roster in the NFL, so drafting additional talent is somewhat of a luxury.

The absence of a glaring need anywhere on the roster allows for the Eagles to be take a player that will make a good offense even better. Ronald Jones is being compared to Jamal Charles, not just for his dreadlocks but for his explosive plays and hard running style as a lighter running back.

This could be a slam dunk for the Eagles at the end of round one. Pairing Jones with Ajayi for his first year will allow him to split carries as a rookie and then become the bell cow in his second season.

The Eagles only have one top-100 pick, so to summarize a few of the other guys — Scales could be an immediate special teams ace and provide linebacker depth, and Smythe could fill the second or third tight end role depending on if the position is addressed in free agency. The other guys are simply depth pieces aiming to make the roster in training camp.

The Cowboys could go several directions with their draft, as they have 10 total picks due to the addition of several compensatory picks. But, their most glaring needs seem to be at left guard, linebacker, and safety.

This particular draft fell to the Cowboys like some experts are predicting, as they select the first receiver of the draft. Calvin Ridley is an immediate starter opposite Dez Bryant and improves the passing offense in Dallas.

“LVE”, as Vander Esch is often called, replaces Anthony Hitchens as the third guy in the linebacker rotation and becomes the eventual heir apparent to Sean Lee as the WILL linebacker.

Austin Corbett becomes the eventual starter at left guard and improves an offensive line that could elect to bring in a veteran to compete with Corbett in training camp. The rest of the picks are all depth, several would have a much better chance to make the roster than others, including Hynes, Parker, and Holmes.

Overall, this would be a good draft for the Cowboys and upgrade their roster at numerous positions. 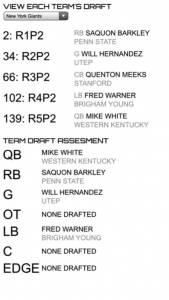 The last time the Giants picked in the top-5 was 2004 when they took Phillip Rivers. Of course, Rivers was flipped for Eli Manning in the same draft and the rest is history. While there’s a lot of talk about Eli’s age, the sense around the league is that they’re going to try to ride it out with him before looking for their quarterback of the future.

In this draft, the Giants get Saquon Barkley and Will Hernandez who instantly upgrade their offense. Barkley is in the mold of Todd Gurley and Ezekiel Elliott, he can carry the offensive load and make things easier for Eli Manning.

Hernandez is a walk-in starter at left guard and can make an immediate impact as well as help secure the interior of that offensive line for the future. Quenton Meeks is a high-IQ defensive back who can step into a secondary that had some issues on and off the field last season and help in several areas.

The other two guys in this draft class could also help. Warner could easily become a starting linebacker and Mike White has some starter-caliber qualities. This class would infuse some much-needed talent into a Giant’ roster that could use a makeover.

In the first round the Redskins get Denzel Ward, who may be the best cover corner in the entire draft class. He doesn’t have the positional flex as Minkah Fitzpatrick, but he is very similar to Chargers’ All-Pro Casey Hayward in his coverage abilities.

James Washington was a highly productive player in college but there are concerns about how his game will translate to the NFL. His testing was average at the Combine but his college tape was too good to let him slide much further than round two or three. He could add to a receiving corps that needs a starter on the outside.

Outside of these two, the Redskins simply add some intriguing depth pieces in the later rounds. All in all, this would be a good draft for Washington, adding two day-one starters.

That does it for the NFC East. Stay tuned for the next installment of our 2018 NFL Mock Draft Series, coming soon.