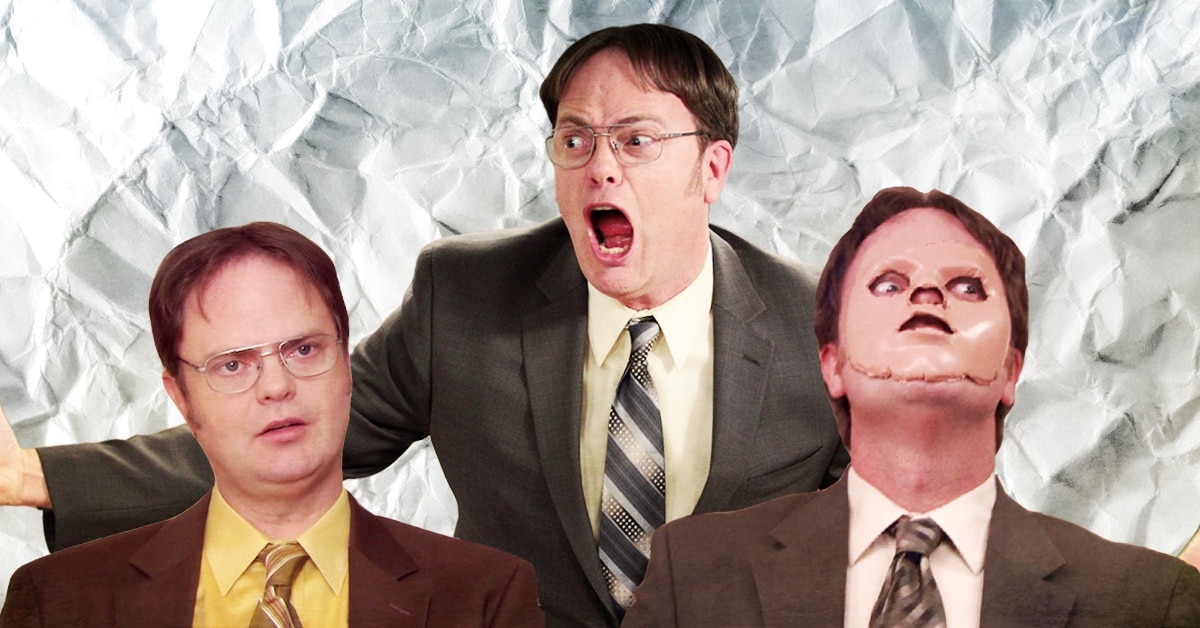 Rainn Wilson’s acting career got off to a crashing start. Literally.  As a child, he landed a part in his elementary school’s version of “You’re A Good Man, Charlie Brown” as the beloved Schroeder, the piano-playing friend of the Peanuts crew.

With the one-night-only play just a few hours away, Wilson zipped down the Seattle streets on his bike.  Suddenly, he lost control, falling off, slamming into the asphalt, and shattering several bones in his hand.

“…I walked into the auditorium in the middle of the second act, with a giant cast on my hand, to great applause, and I was hooked ever since,” Wilson told The Seattle Times in 2006.

And from that moment on, he was destined for greatness.  Just another child prodigy on the fast track to stardom…right?

Many know Rainn Wilson for his portrayal of quirky oddballs like his breakout role as Dwight Schrute on NBC’s The Office.  To the viewer, it just feels natural to see him in those parts.

Wilson can relate so well to such characters because, well, that’s kind of who he was back in high school.

“The posse I traveled with in my Shorecrest [High School] days were not exactly the popular crowd,” he told The Seattle Times.

Wilson lingered in obscurity for years, long before anyone would ever recognize him as the dweeby, power-grubbing assistant manager of a Scranton paper company.

After high school, Wilson wrestled with making a commitment to acting.  Doubt flooded his mind.  His father never made it as an artist.  How could he?

Then, the moment came.  One day, while visiting his estranged mother in Boston, he decided to catch a matinee screening of the film version of A Chorus Line.

The movie made a profound impact on him, and proved to be a defining moment in his life.

“I just related on such a deep level. It hit my heart and I just was crying in the theater,” Wilson told Boston Magazine.

“After that I went and auditioned for theater training programs and actually got into NYU and went and studied theater there. It all happened one fateful matinee at Government Center.”

After graduating from NYU’s Tisch School of the Arts in 1989, he began his career on stage.  Wilson spent that first year in several off-Broadway productions, honing his craft.

For the next six years, Wilson bounced around from production to production.  He took jobs as an understudy on many shows before finally landing a leading role in a revival of Shakespeare’s The Tempest in 1995.

It was his first Broadway role, and it put him in a solid spot in the theatrical world.  But unfortunately, it wasn’t enough to pay the bills.

According to ABC News, there was a time that Wilson was living off of those instant-credit checks that come in the mail with credit card bills.

Something had to change.

Soon, he began auditioning for small TV roles.  Parts that might pay a bit better, and help him to his feet.

After a handful of auditions, he got his first crack, playing a psychotic stand-up comedian on the long-running soap opera One Life to Live. Nothing spectacular.  Some might even call it bad.

But, it was a start.

He parlayed that small part into another minor role in the obscure sci-fi comedy, Galaxy Quest, two years later.  Then, after a TV movie, he got major exposure in Cameron Crowe’s Almost Famous in 2000.

With his foot firmly in the door, Wilson’s reputation grew.  The next five years included appearances on hit shows such as CSI, Law & Order: SVU, Six Feet Under, and Entourage.

Then finally, 16 years into his acting career, he got the audition that changed the course of his life forever.

Rainn Wilson described the audition process for The Office as “long” and “grueling”. After whiffing in his audition for the role of Michael Scott, Wilson went for the Dwight Schrute role.

“For the call-backs, they got everyone they were considering for a weekend,” Wilson told Larry King.

“And they just mixed and matched people, and had them improvise, and they said ‘Be prepared to stay all day. You may need to stay all weekend.’ And it was this really long process, but it was great…I got to improvise with Steve Carrell and John Krasinski and they kinda saw who had chemistry.”

After that long weekend, he got the job.  It was a career-changer, and turned him into a household name.

In 2007, between filming seasons 3 and 4 of The Office, Wilson hosted Saturday Night Live.  He called it one of the greatest moments of his life.

Reflecting on his journey, he told MSNBC:

“I was in New York doing theater for 500 bucks a week and barely making it, driving a moving van to make money to get by. It was never really on my dream list to host Saturday Night Live…so I’ve already exceeded my expectations and I’m very grateful.”

It’s been nothing short of a whirlwind of ups and downs, but it’s safe to say that Wilson’s earned everything he’s gotten.

Bumping around Broadway, searching for roles in Hollywood for sixteen years, all led to his eventual breakout role. He stayed the course, focused on his ultimate goal, and kept plugging away.

If we can learn anything from Rainn Wilson’s career, it’s that once you know your mission, stay the course.  Persistence pays off.

If you liked this underdog story, you’ll love our FREE eBook — The Anatomy Of An Underdog — featuring 5 stories you’ve never heard from your favorite athletes and entertainers.  Click here to grab your copy.