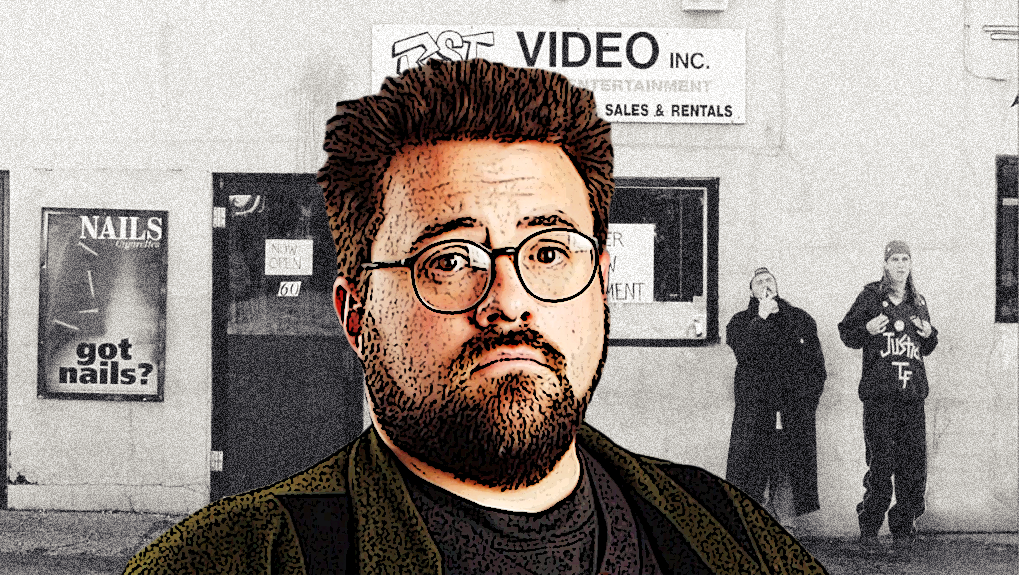 Before he made the low-budget film that launched his career, Kevin Smith was like many other 18-year-old kids.  He had no money and no clue what to do with his life.  From bussing tables at Long John Silver’s to digging graves at a local cemetery, he was stuck in a rut of dead-end jobs.

Smith had no identity when it came to navigating the ‘real world’.  But he’s always been a comic book fanatic, even in those days.

“Dominos Pizza.  Worked there for a day,” he says in the documentary Snowball Effect: The Story of Clerks.  “The day that Batman came out…quit…so I could see Batman.”

Bouncing from job to job was growing tiresome.  He needed something that would stick.  Somewhere to settle in.

He borrowed a friend’s car to interview for a job at Quick Stop, a local convenience store, and RST Video, a video rental shop right next door.  At the time he didn’t realize it, but this job would change the course of his life forever.

The Low-Budget Film That Inspired ‘Clerks’

One night in 1991, on his 21st birthday, a co-worker coaxed Kevin into going to see a low-budget film in New York.  It was called Slacker, and it transformed the way Smith thought about filmmaking.

“It made it seem possible,” he said, “Like, I can do something on a low-budget shoestring.”

Suddenly, he had a vision — to make his very own independent film.  Fanning the flame of inspiration, Smith decided to attend Vancouver Film School, who at the time were offering an 8-month comprehensive film program.

There he would learn how to operate a camera, light a set, and all the other steps to shooting a feature-length film.

But after just four months, he decided to drop out.  Smith pivoted, making the bold decision to go all-in on his idea.  He’d save the $5,000 tuition and invest it into his own film instead.

The day he returned home to New Jersey, Kevin began feverishly writing his script.  He’d be returning to work at the convenience store, so he decided to get resourceful.

Why not write a film that’s set in a convenience store?  He knew that world, he could translate it into an entertaining story, and he had easy access to it.  After his shift ended at night, instead of locking up, he’d bring in his equipment and start filming.

With the script finished, Smith’s next step was to gather the funds. After reading a magazine article breaking down the budget of several independent films, he determined he’d need roughly $25,000 to make his movie.

Problem was, he didn’t have anywhere close to that.  But, he was dead set on doing this. Far too determined to let money be an issue.

So he built up a supply of ten credit cards with $2,000 limits, and maxed them all out.  He sold his comic book collection, got small donations from family members, and used every penny of his Quick Stop checks.

These reckless decisions put him on the brink of financial ruin.  If the film didn’t pan out, he’d be in serious trouble for the better part of his adult life.  But he barely thought twice.

He had a movie to make.

After learning that technology company Kodak was offering a student discount for independent filmmakers, Smith enrolled in a class at a local community college.  He went to Kodak, showed his student ID, rented a camera at the discounted rate, and immediately dropped the course.

With more slick negotiating, he managed to piece together a ragtag cast, including two actors with theater experience, an acting student, and a group of first-time actors.

While he received permission to film at the Quick Stop, Smith was only allowed to shoot at night when the store was closed.  So they filmed every night, from 10:30 pm to 5:30 am, for 21 straight days.

You could imagine the toll it took on him and the crew.

Because he was working during the day and filming at night, Smith slept no more than one hour per day.  In the end, sleep depravation caught up with him. While the crew shot the climactic scene of the film, Smith was passed out in the back of his car.

Despite a plethora of problems and a lack of experience across the board, Smith and company managed to shoot a feature-length film with just $27,575.

After finishing the editing process, they screened the film for the first time at the International Film Festival in Manhattan.

“It was very disheartening,” Smith expressed in an interview.

“There were no more than 18 people at the screening. Everyone who walked out was a woman. I thought, my God, it’s not a chick film…Why did I spend $27,000 on a filthy movie?”

However, one man named Bob Hawk, an advisor at Sundance, was in attendance and actually enjoyed the film.  Over time, word spread and Smith began hearing from distributors and other festival programmers.

The Sundance Film Festival invited Smith to screen Clerks that winter.  It was met with positive reviews and got picked up by Miramax for theatrical release.

All in all, Clerks grossed more than $3 million in theaters, netting Kevin Smith a 10,000% return on his original risky investment.

Now, Kevin Smith is a world-famous filmmaker, actor, and stand-up comedian.  He managed to parlay his small-budget success into a lucrative career built on his passions.

If there’s one lesson here, it’s to take more risks in life.  Never let fear of failure stop you from doing something.

Especially when it comes to your dreams.

What’s one thing you’ll do today that will bring you closer to achieving your biggest dream?  Comment below.