Week 1 is officially among us. The 53 man rosters are locked in and each team is geared up to kick off the season with a win. While each team in the NFL will try to do everything to win their games this week, you should be signing up with DraftKings through our promo and doing everything you can to win some money this Sunday!

With a salary cap of $50,000 and only so many players to choose from, I’m here to help take a little bit of the weight off your shoulders when assembling your lineup.

Here are five under-the-radar picks that you should look to include in your DraftKings lineup in Week One! 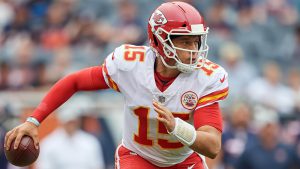 In a slate that features all of the top quarterbacks in the game, lost is QB Patrick Mahomes. The Chiefs felt so highly of him that they traded Alex Smith to Washington so they could give Mahomes the keys to the ship.

While the QB had very limited playing time last year, the second-year passer impressed with his arm in the preseason, completing 72% of passes for 367 yards and 2 TD’s in 3 games.

While Mahomes will have to go up against a stout Chargers defense, his ability to spread the ball around to different receivers, and potential to check down to explosive running back Kareem Hunt, Mahomes is pick that could pay dividends at $6,000.

Stacking with Mahomes with WR Tyreek Hill or TE Travis Kelce will help rack up those fantasy points in Week One.

With star running back Le’Veon Bell yet to sign his franchise tender, RB James Connor is receiving the bulk of first team reps. Pending anything crazy, he’s expected to start Week One for the Steelers.

In limited action last season, Conner ran for 100 yards on 19 carries and 1 TD this preseason. He’s also proven to be a threat in the passing game, racking up 61 receiving yards.

Conner goes up against a Browns defense that was awful last season, and is gave up an average of 128.8 rushing yards per game this preseason. Severely underpriced at $4,500, Conner is worth the shot at the flex or RB2 position on a tight budget!

When WR Kelvin Benjamin was traded to Buffalo last season, WR Devin Funchess took over the primary receiver role for QB Cam Newton. Funchess had some up-and-down weeks, but when he was hot he was unstoppable.

In 2017, Funchess had 10 double-digit fantasy point games, scoring over 14 fantasy points in 6 of those games. Look for much of the same Week One as Cam Newton will look for Funchess to be the guy again this season. At $5,200, Funchess can be picked as a primary receiver or slotted into the flex spot.

Even though the Cowboys have improved their defense, their secondary still cannot be trusted. Stacking Devin Funchess with Cam Newton could mean serious points this Sunday. 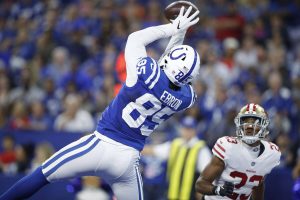 Last season, TE Eric Ebron posted 574 yards and 4 TD’s with Detroit, playing all 16 games for the first time in his career. Now with the Indianapolis Colts, Ebron looks to carry that success into this year.

With QB Andrew Luck back in the mix for the Colts, Ebron has already become a favorite target. The tight end caught 9 passes for 70 yards and 1 TD this preseason. Last season, Ebron had 5 double-digit fantasy point games, with 4 of those games averaging 14+.

While the Bengals defense appears solid, look for more than a few connections between Luck and Ebron, showcasing his value at $3,300 as a low-risk, high-reward player for Week One.

While I’d usually rather stack my lineup and pick the cheapest defense available, Week One is different. While defenses automatically start with 10 points, the Ravens had 6 games last season where they scored 20+ fantasy points.

With the announcement that the Bills will start QB Nathan “Five Picks” Peterman over first round draft pick QB Josh Allen this week, grabbing the Ravens defense at $3,800 is almost like stealing points for a slot that’s typically an afterthought.

The Ravens had a +9 turnover differential this preseason and registered 21 sacks. Look for more of the same in Week One against the Bills. Although the price tag is high for the Ravens defense, the value it could bring your team this weekend makes up for it.

Have a great Week One and come back next week for more under-the-radar picks!

If you haven’t already, sign up with DraftKings here.