From Living in His Parents’ Basement to Doing the Impossible

Joel Runyon is an entrepreneur, athlete, endurance runner, and speaker.

After graduating from college in the midst of The Great Recession, he couldn’t find a job. Living in his parents’ basement and feeling bad about life, he created a challenge for himself called The Impossible List.

Here are some cool things he’s checked off that list so far:

I recently had the opportunity to ask Joel a few questions about his biggest struggles and successes thus far.

What were things like for you after graduating from college? Did you know what you were going to do with your life?

I was following the life script laid out for me until I graduated from school and tried to get a job in the middle of 2009 – right in the midst of the recession.

I applied to my desired jobs and got nothing back. I picked my B-list jobs and they didn’t respond.

Pretty soon I was applying for any job at Starbucks or Target and couldn’t get them to call me back. I felt pretty bad about myself and sort of settled into reading about other people doing cool things, watching Burn Notice, and generally feeling bad about myself and my life.

What was the inspiration for ImpossibleHQ.com?

Sitting in my parents basement, I had a lot of time to think.

I was following blogs around the internet. Chris Guillebeau was going to every country in the world. Tropical MBA was building a business in the Philippines. Sean Ogle quit his job to move to Thailand.

I saw all these people doing things that I wanted to do but they all seemed impossible.

I wanted to travel, start a business and do all these things – but they all seemed like they were for other people. Not me.

So I mostly made out a list of things that I wanted to do but felt impossible – and then I felt sorry for myself that I couldn’t do them.

Of all the things on that list, which was the catalyst for you to change your life in such an extreme way?

All the things on the list seemed Impossible for me. I was a loser in my parents’ basement. I couldn’t travel the world, start a business, or even get a call back from Starbucks.

But one of the things on my list was “run a triathlon.” I had excuses for why I couldn’t do everything else, but I had no answer to why I couldn’t just get on my bike and ride around the block or put my shoes on and start training.

So I signed up for a race, trained for it, and went to my first triathlon – an Indoor one at LifeTime Fitness. It was a 10-minute swim, 30-minute bike ride, and 20-minute run. All indoors. A weird setup for a triathlon but at least I wouldn’t drown in an open water swim.

Long story short, I finished the race and realized that I had spent so much time telling myself that this was impossible – and I just did it (so it clearly wasn’t).

I asked myself – if that’s true, what else could I do if I just decided to go after it, push my limits, and train?

And so I started using that as my reason to begin pushing on my Impossible List and then I began everything at IMPOSSIBLE.

You’ve started multiple businesses. Which came first? And how did you get it off the ground?

My first business was consulting. I just did it outside of my day job and hustled up other clients.

I eventually launched a few fitness products around IMPOSSIBLE and then a bunch of customers showed interest in the paleo diet so I started a content site on paleo, and then eventually a meal planning app.

Most of my business planning is not very elaborate. It just involves creating a bunch of things and listening to customers and helping them answer their questions.

It’s led to other side businesses including MoveWell App and others.

What advice would you give someone looking to change their life for the better (start a business, run a triathlon, etc.)? (Or, what advice should they ignore?)

Take a cold shower. I did a TEDx talk on it and it’s the easiest way for you to get out of your head and into your body.

If you want to stop talking and start doing, you need to actually do things that are uncomfortable.

Cold showers are an easy way to teach yourself that you can do hard things and not die. Once you realize that, you can start leveling up the types of hard things you do until you do more and more and it becomes who you are.

Big thanks to Joel Runyon for taking the time to answer my questions! You can keep up with him over on Twitter @JoelRunyon. 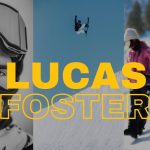 The Underdog Journey of a Team USA Snowboarder

Francis Ngannou: From Poverty & Homelessness to the Most Intimidating Fighter in the UFC