How AC/DC Rode the Highway to Hell Into the USA

When people think about AC/DC, their mind may shuffle through “Back in Black”, “Thunderstruck”, or any of the band’s other popular stadium anthems. Meanwhile, Highway to Hell, and original frontman Bon Scott, are an afterthought.

Without taking anything away from Brian Johnson, the band’s sound was completely different with Scott at the helm.  It was gritty.  It was raw.  The way the real AC/DC should sound.

As Bon Scott’s last album before his untimely death, Highway to Hell is the peak of the band’s early work.  Through their first three albums — High Voltage, T.N.T., and Dirty Deeds Done Dirt Cheap — they built their reputation as fun-loving, hard-partying, boozing maniacs. 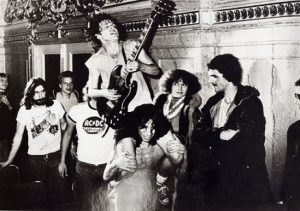 Their lead singer had a serious drinking problem.  A writer at Rolling Stone called them “Australian gross-out champions”.  The band was in hot water with venues, too. “We got banned from a lot of gigs,” then-bassist Mark Evans said, “Angus was dropping his shorts”.

They weren’t exactly taken seriously as the rock and roll superpower they would go on to become.  Due to the group’s laundry list of issues, Atlantic Records grew hesitant of moving forward with the band.

Their message to AC/DC: hire an outside producer or you’re gone.  Since their debut, the band’s albums were always produced by Angus and Malcolm’s older brother, George Young.  After all, AC/DC was a family business, and they were loyal to George.

But, at the same time, they understood that in order to break into the American market, they needed to act on Atlantic Records’ demands.  “George had been fabulous for them but he hadn’t been to America for years,” said band manager Michael Browning, “and American FM radio had a sound you had to experience to really understand.”

After dragging their feet, and some conflicts with the label’s first choice, the group eventually settled on Robert John “Mutt” Lange.  Up to that point, the South African producer’s résumé consisted of a few moderately successful rock bands in the UK.  In the end, though, Lange’s pairing with AC/DC would result in a true rock and roll masterpiece.

In July of 1979, after months of hard work in a London studio, they released Highway to Hell.  Typically, when a record company forces a change, the music gets watered down.  Stripped of the elements that made the band who they are.  But, with AC/DC, that wasn’t the case.

Angus Young takes the lead with face-melting solos, while Malcolm’s unwavering rhythm, the quiet driving force of AC/DC, keeps the train from running off the tracks.  Drummer Phil Rudd and bassist Cliff Williams work masterfully in tandem, driving the pulse of every song.

The album’s title track sets the tone for the rest of the album.  While commonly associated with satanism, the song actually originates from several states banning the band from staying in their hotels.  Instead, they were forced to stay outside state lines, then cross over in the morning for their gig.  Angus called this drive the “Highway to Hell”.

“Walk All Over You” showcases Phil Rudd and his wicked drum fills.  It changes tempos, a driving down-beat that breaks down for each pleading chorus.  “Touch Too Much” deals with the dangers of overindulgence, something Bon Scott was notorious for.  “Night Prowler”, the final track, moves at a stalking pace reminiscent of “Ride On” from Dirty Deeds.

There’s no weak point of Highway to Hell.  For the first time, they harness their full potential, unleashing it with calculated precision.  It’s the pinnacle of the Bon Scott era, and a high point in the storied history of rock and roll.