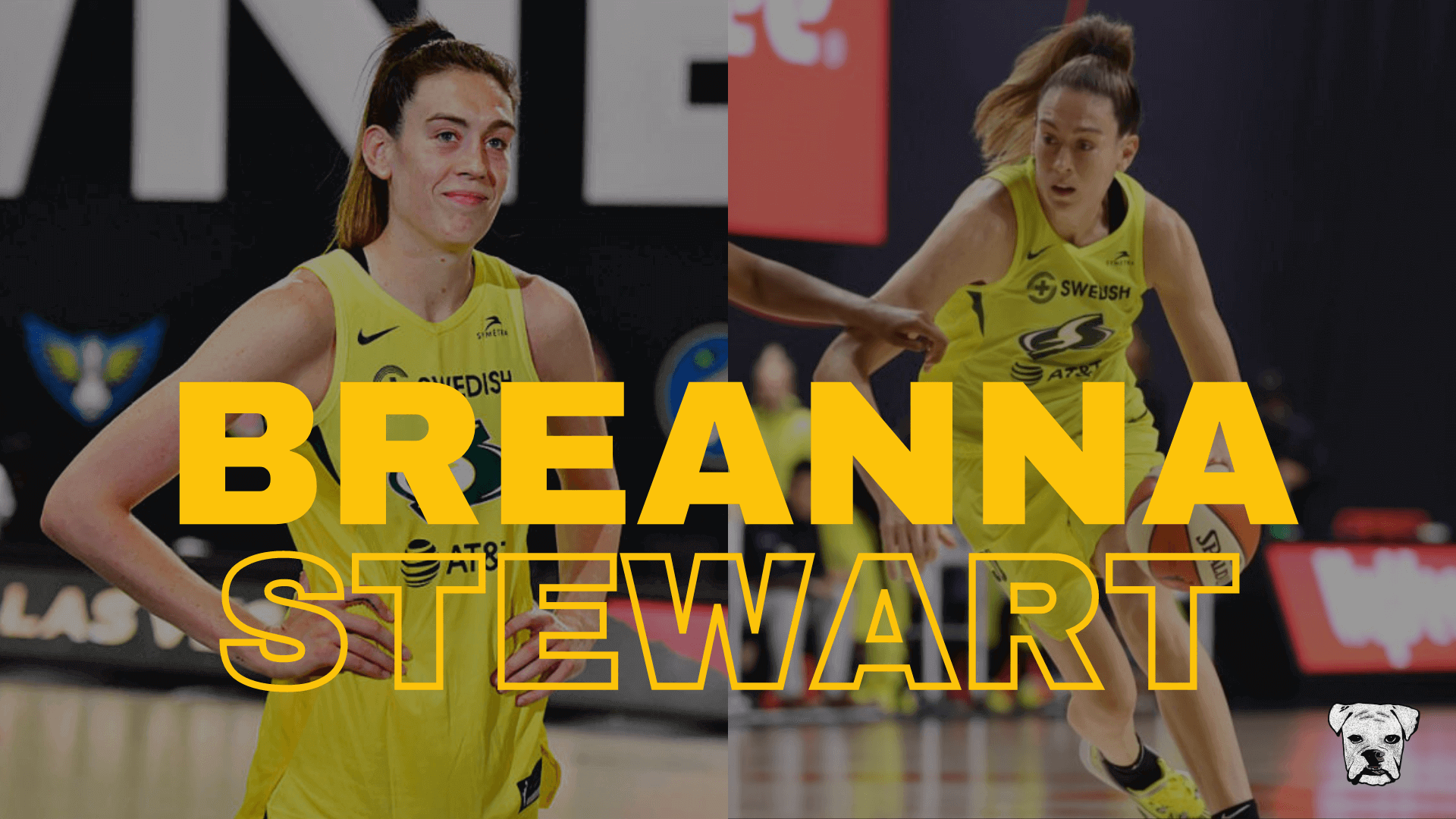 National Gatorade Player of the Year, Gatorade Female Athlete of the Year, and a McDonald’s All-American in high school. One of the most feared college players, a record four times the Final Four’s most outstanding player, and four national championships. Breanna Stewart’s high school and college accolades speak for themselves, and today she is unarguably one of the best players in the WNBA.

Standing at 6’4” with a 7’1” wingspan, and combining the size and strength of a top-shelf big player with the skills, handling, and playmaking of an elite guard, there’s nothing Stewart can’t do on a basketball court.

Dominate the paint with physicality on the post – check. Shoot from the arch – check. Drive to the rim with intensity – check. Create shots off the dribble – check. A complete player and, according to Geno Auriemma, her coach at UConn, “the first Durantesque player in the women’s game”.

Drafted by the Seattle Storm in 2016, Breanna Stewart paired up with Sue Bird, certainly one of the best point guards in the history of women’s basketball, to form the most dominating duo in the WNBA in recent years. In 2018, the duo led the Storm to a terrific campaign and the WNBA title, with Stewart being awarded both the league MVP and Finals MVP, only the sixth player to do so.

After a disastrous 2019 season, when both stars suffered severe injuries and missed the entire season, they returned for the 2020 season and led Seattle to the fourth WNBA title in the team’s history. Ahead of next season, Breanna Stewart and the Seattle Storm are regarded by many sportsbooks on BettingNews.com as the overwhelming favorites to win the championship.

However, all of this came from a lot of work and dedication, and all those hours spent on a basketball court also served as a refuge from the hard reality Breanna Stewart had to endure at the safety of her own home.

Born in Syracuse, New York, Breanna started playing basketball at an early age, and by fifth grade she was already working to improve her game. Despite having always been tall for her age, she created different routines to help her develop her ball handling skills and perimeter shooting ability, so she could be more of a complete player, and not just a rebounder or rim protector.

But basketball was her safe space as well. In a 2017 essay for The Players’ Tribune, Breanna revealed she was sexually abused by her aunt’s husband from age 9 to 11. When she told her parents what was happening, they immediately reported the police, and the perpetrator was arrested and sentenced. And even in the night, she told them, she went to basketball practice to relieve her mind. “With all I’d been through, the only thing I wanted to do was go play basketball”, she wrote.

Stewart went on to play for the Cicero-North Syracuse High School, and quickly became one of the top high school prospects in the country. In her freshman year, she averaged 17 points per game, and led the team to a 21-3 record and the regional final game. In her junior year, she led the team to a state title, averaging 24 points and 15 rebounds, and announced her commitment to the University of Connecticut.

In 2011, Breanna Stewart was selected to the USA Basketball U19 team that went on to win the 2011 U19 World Championship. She posted the highest scoring average among USA players with 11.2 points per game, and was named to the all-tournament team, even though she was one of the youngest players in the tournament.

Also in 2011, she competed for the USA Team at the 2011 Pan American Games, in Guadalajara, Mexico. Stewart was the only high school player to be selected for that team, and despite the USA Team failing to earn a medal, she led the team in scoring, rebounds and blocks, and was named the 2011 USA Basketball Female Athlete of the Year.

Breanna Stewart had a stellar career with the University of Connecticut, and in her freshman year, carried the Huskies to the NCAA championship and was awarded the Most Outstanding Player of the Final Four. She repeated both feats in her sophomore year, and was named the Associated Press Player of the Year, marking only the third time a sophomore received the award.

In the 2014-15 season, she led the UConn Huskies to the third consecutive NCAA title, averaging 18.1 points, 10.7 rebounds, and shooting 42.1% from the arch. Stewart was elected again the best player in the Final Four and earned the American Athletic Conference Player of the Year for the second time. In her final season at UConn, the Huskies went undefeated and won their eleventh NCAA title, and became the first NCAA women’s basketball team to win four straight national championships.

Stewart posted career highs in rebounds, assists, and blocks, and was the first-ever unanimous pick for AP Player of the Year. She finished her career at UConn as second in the all-time scoring list with 2,676 points, fourth in rebounds with 1,179, and first in blocks with 414.

The Seattle Storm & Beyond

Breanna was drafted first overall in the 2016 WNBA Draft by the Seattle Storm, and immediately made an impact in the team. By the end of her rookie season, she averaged 18.3 points, 9.3 rebounds and 1.8 blocks, and broke the WNBA record for most defensive rebounds in a season. She won the WNBA Rookie of the Year Award and the 2016 ESPY Award for Best Female Athlete.

In 2018, Stewart and Bird led the Storm to a 26-8 record and the WNBA title, after defeating the Washington Mystics in the WNBA Finals. During the season, Stewart elevated her game and averaged new career-highs in scoring, steals, field goal, and three-point percentage. She won the league MVP award, and after averaging 25.7, 6.0 rebounds, 3.7 assists, and 1.7 steals in the final series, she was also awarded the Finals MVP.