Jack Smiley: Winning The Mental Battle After a Life-Altering Event 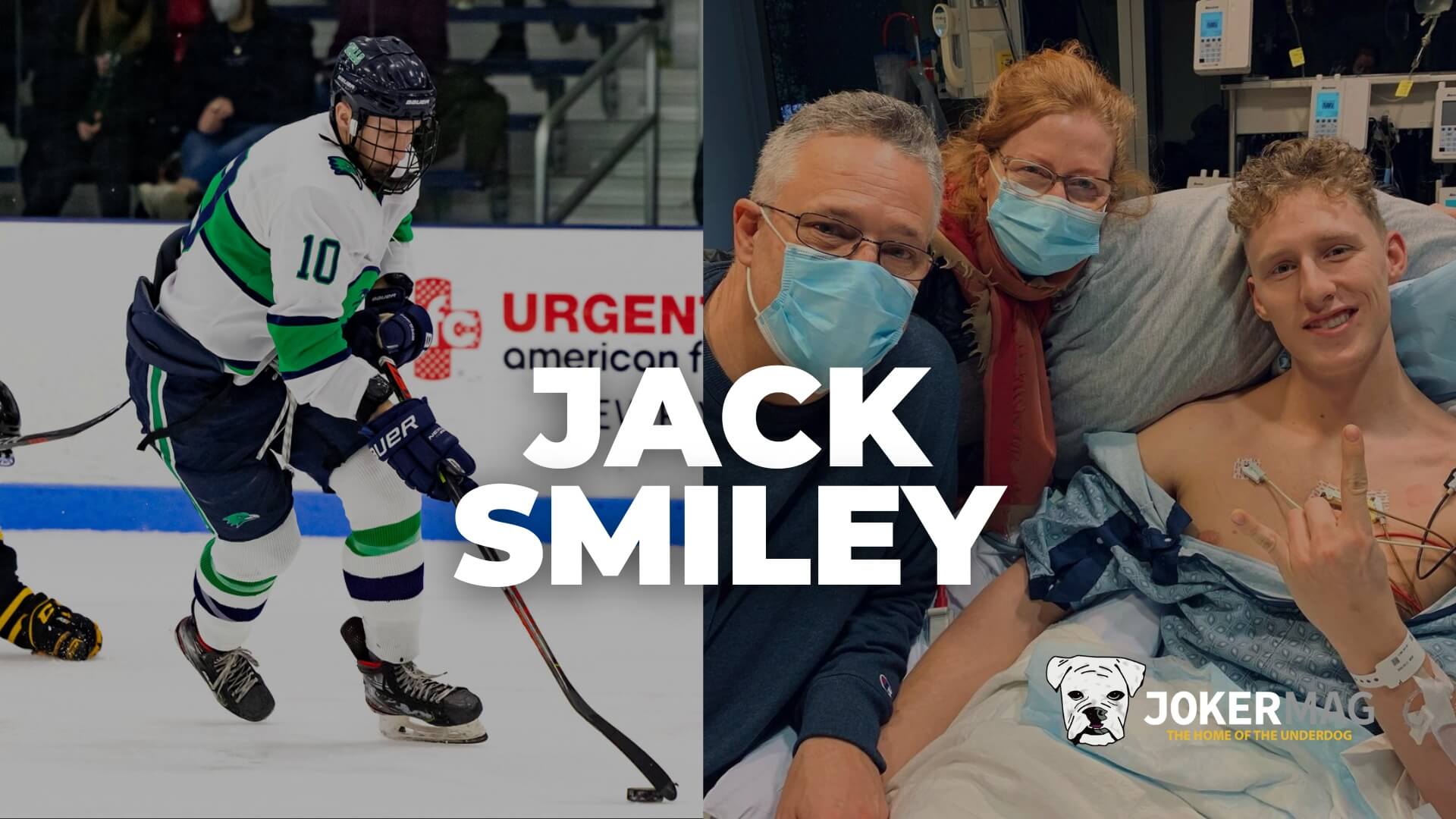 Jack Smiley is a college hockey player who suffered a stroke in February 2022. In the time since then, he’s recovered faster than anyone could’ve imagined.

Jack has documented his recovery on TikTok, sharing his journey with more than 40,000 people who are inspired by his strength and infectious positivity.

We had the chance to speak with Jack about his approach to adversity, advice for others, and much more.

What made you fall in love with hockey?

Definitely the speed of the game. Flow, creativity, and aggression all intertwine in hockey.

My earliest memory or I guess I don’t even really remember it but my parents tell the story all the time of how I got into hockey. My parents loved to snow ski, and when I was very young (like 4-years-old I think) they took me to a mountain to learn how to ski so we could all go on winter vacations together.

There was another kid in my learn-to-ski class who was extremely good for our age. My parents got talking to his parents asking about how he got so good, and they said he was in ice skating lessons to work on his edges. So, they put me in skating lessons in order to get better on the mountain, and as soon as I stepped on the ice I fell in love.

Can you describe what happened on February 21st, 2022?

February 21st, 2022 started out as a great day. It was only towards the afternoon that things started to go south. I play NCAA ice hockey for Endicott College and was on the ice when I had a stroke that landed me in a much different position than how the day started.

What do you remember about the days immediately following your stroke?

The days immediately following the stroke were filled with a lot of emotions as I spent the week in the ICU, before getting transferred to the rehab hospital.

The stroke left me completely paralyzed on my right side. My talking was barely understandable. I couldn’t swallow (so no eating or drinking). I think I cried all day for 3 days straight. There was a lot of shock behind those emotions, I don’t think, at this point, it had fully hit me what was going on.

Shock turned to self-pity. I was an athlete, my physical abilities had given me most, if not all, of my confidence. Now, in the blink of an eye, I was completely paralyzed on my right side. I couldn’t even sit up in bed without falling over because half of my core shut down.

I am proud to say I let out my first smiles and laughs 3 days in when they brought me ice cream for the first time. It was the first thing I could “eat” and they had to keep it in milkshake form because legit ice cream was still too much for me to swallow.

What has been the most challenging part of your recovery?

The most challenging part has been not allowing myself to get caught up in the past, with thoughts of what I used to be capable of.

It has been hard going from a high-level athlete to a guy who couldn’t shower or go to the bathroom without the help of a nurse. I worked my entire life to develop a physical skill set, and it was all gone in a blink of an eye.

You’ve kept an optimistic outlook through an extremely difficult circumstance, and it’s inspired a lot of people who watch your TikToks. How have you stayed so positive during your recovery?

By focusing on winning the mental battle mentioned in the above answer. The most challenging part has been not allowing myself to get caught up in the past and what I used to be capable of, so I choose to not focus on it.

I can’t change a single thing that has happened in the past, I can only control what I do today and how I react in this moment.

It’s legitimately a constant battle, but a battle that you have the power to dictate who wins every time. There are going to be frustrating and horrible days, let yourself feel those emotions for however long you need because, at the end of the day, we are human, but don’t let those emotions consume you.

What advice would you give to other people out there facing adversity?

Don’t let anyone tell you what you can and can’t do.

There is a huge factor to any situation that nobody can measure, not a doctor, coach, parent, friend, or enemy, and that is your heart and your resilience. You can’t fail if you never quit. You can drag benefits out of any situation.

You’re an athlete who got injured and you are missing a whole season? Focus on stretching, and come back with new abilities. You can’t stretch? Read and become more knowledgeable or pick up a new hobby that will lead to you becoming a more well-rounded person.

Time doesn’t stop for anybody, no matter the reason. We all have a certain number of days on this planet so choose happiness and hard work over bitterness and wishful thinking.

If you could put one message on a billboard for millions of people to see, what would it say?

If that’s too long:

I have picked up countless new activities that I have been told will hopefully help my brain reconnect back to my body including (but not limited to) MMA and dancing.

I look like a wounded giraffe when I do these activities, but I always tell people I am going to come out of this recovery with the ability to sweep your girl off her feet on the dance floor and be able to knock you out if you try to do anything about it haha.

In reality, though, it’s all about making the best of any situation you are in, either by finding new things to dive into or by finding new ways to do old things you love. I have been able to do a combination of both.

There also is a cool story that starts back when I was in the ICU. On my way out of the ICU, while I was being transferred to the rehab hospital to start therapy, keep in mind I still couldn’t even get out of bed to a wheelchair at this point.

They had to lift me out of bed with this crane thing attached to the ceiling to get me in the stretcher. It was 5 days in and I could barely talk and was completely paralyzed in my full right side.

On the way out of the ICU, I ran into one of my neuro specialists. I said to him “I’ll be back on the ice again in 3 weeks, just watch”. He was of course very doubtful and was trying to set my expectations lower to not give myself false hope.

I was on the ice for the first time three weeks later. It was with a walker and two of my therapists holding me up. But I got on the ice exactly 3 weeks after I said I would. I had a follow-up with that neuro specialist later that same day, and showing him the video was pretty cool.

Editor’s Note: Huge thanks to Jack for taking the time to share his wisdom with us!