We’re now five weeks into the season and I’ve been killing it so far, to the tune of a 16-9 (.640 %) season-long record. We had yet another big week and I’m back again to give you the picks you need to dominate NFL Sunday.

If you haven’t already, take a minute to register for DraftKings and play free for $2,000,000 in total prizes with your first deposit of $5 or more.

After signing up, follow my picks each week and listen to the Sneaky Plays podcast for a deeper dive and exclusive bonus picks. We have followers winning more and more money each week!

Hop on the train or miss out on quick and easy money. Your call.

Let’s get to it. Here are my 5 under-the-radar picks for your daily fantasy lineup in Week 6! 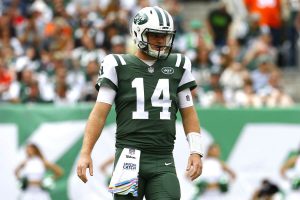 Sam Darnold is coming off a week where he went 10 for 22 with 198 yards and 3 touchdowns. With the emergence of boom-or-bust RB Isaiah Crowell, Darnold didn’t need to do much through the air in the Jets blowout win over Denver.

This week, Darnold goes up against the Indianapolis Colts. Their defense is middle-of-the-pack, yielding an average of 282 passing yards per game. However, they recently gave up 375 yards to Deshaun Watson and 341 last week against Tom Brady.

Couple that leaky Colts secondary with the fact that Darnold is averaging 266 yards passing at home (almost 100 yards more than on the road), and you have a sneaky play this week at the QB position.

Overall, at just $5,300, Sam Darnold comes at an extremely low cost, allowing you to spend big bucks on the more expensive guys at different positions. 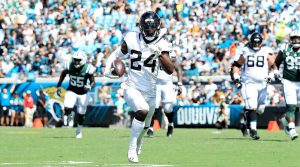 T.J. Yeldon has made the most of his oppurtunities this season, with his biggest game coming last week against Kansas City where he rushed for 59 yards, snagging 8 passes for 69 yards and a touchdown.

With RB Leonard Fournette out again this week with a lingering hamstring injury, and RB Corey Grant placed on IR, Yeldon is in position for yet another productive game.

While the Jags did sign free agent RB Jamaal Charles, there’s no question that Yeldon will be the primary back against a Dallas defense that’s surrendering an average of 337 yards per game and without Sean Lee at linebacker.

Where Yeldon will be extremely valuable this week is in the passing game, as the Cowboys are extremely aggressive getting after the QB this season, adding even more value to his $6,400 salary!

Mohamed Sanu has been one of the more underrated receivers in football this season.

Last week against the Pittsburgh Steelers, Atlanta’s third receiver caught 4 passes for 73 yards and 1 touchdown. Look for Sanu to have another productive day against Tampa Bay. Quite frankly, the Bucs defense has been a monstrosity this season.

At the minuscule $4,800 price point, Sanu will add value to your lineup for cheap and is definitely worth it as a WR3 or FLEX. 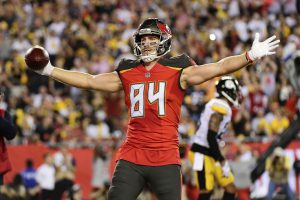 Like Yeldon, Cameron Brate will look to take advantage of a golden opportunity. Fellow TE O.J. Howard is expected to play a very minimal role this week after spraining his MCL two weeks ago.

The Bucs will be looking to fill the void in Howard’s absence against an Atlanta defense that’s surrendered the 4tth most yards in the league.

Although JuJu Smith-Schuster didn’t have his best game against  Atlanta last week (4 REC, 34 YDs, 1 TD), he’s clearly an integral part of what the Steelers do on offense.

On the year, he’s averaging 90 yards per game and 12.9 yards per catch. The second-year receiver faces a Bengals defense that’s giving up an average of 276 yards through the air.

At $7,300, Smith-Schuster is on the more expensive side, but he should definitely be slated as your WR2 this week!

Be sure to follow me on Twitter so you never miss last-minute updates and advice. Don’t forget to tweet me a screenshot of your winnings (like this one) when you win cash with my picks!