Throwback Album of The Week: We Are The Streets (2000)

This is the first real L.O.X. album. Their first album, Money, Power & Respect, had bangers and hits – and shiny suits. The tandem consisting of Jadakiss, Styles P, and Sheek Louch has been deemed undisputedly legendary and has served as an incredibly important pillar in the New York rap scene.

Kiss & Styles were the lyrical beasts, having never been out-rapped by anyone besides each other. Sheek had bars, however he was the self-proclaimed “Silverback Gorilla,” and he elevated that image with his violent, street-oriented lyrics.

Just leaving P. Diddy’s Bad Boy Records, The L.O.X. were eager to release their first and only hardcore record– the one they always wanted to make. The group had a ton of expectations to live up to and were on the cusp of stardom when they released their highly anticipated Money, Power & Respect in 1998. 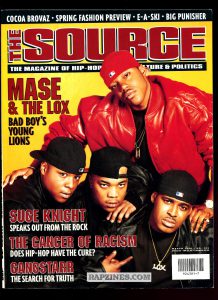 However, to much disappointment and despite the best efforts of Diddy and his Bad Boy army, the Yonkers natives never appeared to be comfortable embracing the flossy, commercial-driven Bad Boy universe. They were street dudes that felt more comfortable being themselves— they weren’t going to allow any number of Rod Stewart samples to conceal who they were.

The group had just made a highly publicized leap from Bad Boy to Ruff Ryders during the year prior, driven by the legendary “Let The L.O.X. Go” campaign.  And, while the move may have made sense commercially, more importantly they were free to make the hardcore rap that they felt comfortable making.

They threw shots at Diddy and the Bad Boys squad throughout the album, as the L.O.X. declared their independence. On the Jadakiss solo track, Blood Pressure, he warns fans and hip-hop journalists— in a much more hostile environment— not to ask him about his prior discrepancies with said record label.

The L.O.X. are my favorite rap group of all time. However, this wouldn’t be genuine without speaking on the knock of We Are The Streets. This is a solid body of work, but it illustrates why blind loyalty to one production team is most times a misstep.

The L.O.X. were absolutely hindered by their dependence on Ruff Ryders’ production. Swizz Beatz provides sample-free beats that begin to give the album a monotonous sound. At that time, it was very difficult for smaller labels to get samples cleared.

Therefore, although Swizz’s beats may have been commercially savvy, it makes sense why two of the best tracks here are those in which “The Trinity” works with outside producers. The DJ Premier-produced “Recognize” serves as a mental break from Swizz’s synthesizer as the rappers coast effortlessly on this piano driven track. Meanwhile, the Timbaland-produced “Ryde Or Die, B*tch” provides the album with a sound you can’t get from anyone besides Timbo.

Tune into Styles P the Ghost, Montega Jada & Sheek Luciano as they report live from the city of Yonkers. They’ve ditched the Rod Stewart samples and the shiny suits. They’re screaming “F**k P. Diddy” on their skits and making you laugh, cry, and periodically rewind a verse just to make sure you heard what you heard.

The L.O.X. held no punches. By the end of the album, you understand their message: “We Are The Streets”.

Check out last time’s Throwback Album of The Week here.